In addition to Iraqi Kurdistan's struggle with the Islamic State, now it has to cope with domestic crises that may require intervention by the US and Europe. 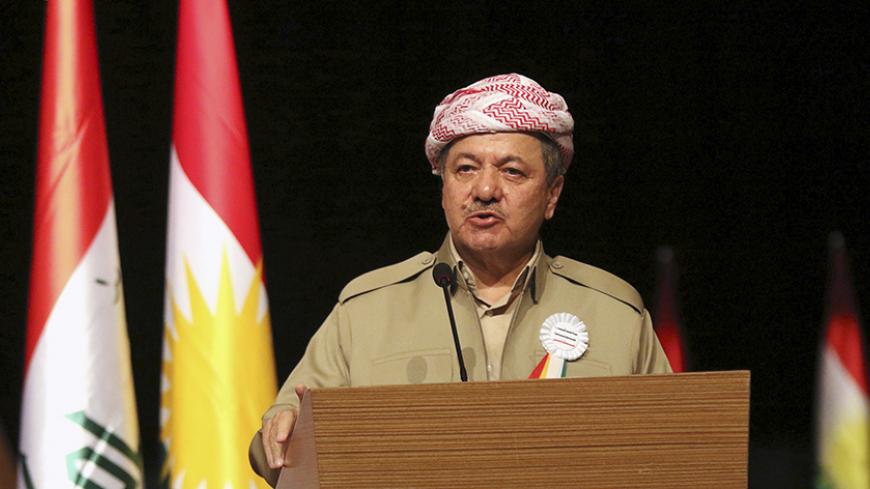 Demonstrations turned violent earlier this month as thousands of people protested the dire economic situation in Iraqi Kurdistan, with many demanding that Massoud Barzani step down as regional president.

Developments that brought the Kurdish region to this crisis situation began when Barzani's term officially ended Aug. 20, but the Ministry of Justice extended his tenure until 2017. That solved a political issue, but it did not end political squabbling. Leaders tried to resolve the issue by holding meetings of all parties represented in the parliament.

But before a solution was found, strikes and demonstrations began.

Earlier this month, as Sulaimaniyah province was hosting one of those meetings — the ninth — schoolteachers who had not been paid for three months walked off their jobs.

A group protested in front of the hotel where the meeting was being held, and police used force to prevent the demonstrators from entering the building. The group then resorted to a sit-in. As this was going on, health workers in the Iraqi Kurdistan capital, Erbil, walked off their jobs.

The protests that began in Sulaimaniyah ​quickly spread. Strikes and street demonstrations became commonplace. The next day at Kaladize, demonstrations turned violent. The office of Barzani’s Kurdistan Democratic Party (KDP) was set on fire. Three people were killed and 20 wounded in the clashes between demonstrators and security. Before Kaladize calmed down, street protests erupted in the center of Sulaimaniyah and in the towns of Ranya, Kelar, Pencewin, Halepce and Koysancak. The Kurdish region, which is not accustomed to popular protests, was facing major demonstrations. KDP offices were the main targetsin many places; some were set on fire, and the police saved others. The Islamic Komal and Yekgirtu parties were also targeted.

Several days of clashes ended with five deaths and about 200 wounded. The headquarters of Rudaw, the largest media outfit in the region, suffered an armed attack.

Street protests and violence amplified the political crisis. Most of the demonstrators were Gorran Movement for Change partisans, which brought Gorran and the KDP into confrontation. The KDP accused Gorran of being responsible, while Gorran blamed the KDP.

Party rhetoric escalated tension, which climbed yet another notch when parliamentary speaker Yusuf Muhammed, a Gorran member, was not allowed to enter Erbil. A KDP official claimed Kurdistan Workers Party (PKK) militants were among the demonstrators. While efforts were being made to resolve the crisis, Prime Minister Nechirvan Barzani of the KDP removed four Gorran ministers from his Cabinet.

Mehmet Oguz, editor of Turkish media portal Rudaw Media Group, told Al-Monitor the central government in Baghdad's refusal to pay the budget share of the Kurdistan region, combined with clashes with the Islamic State (IS) and the influx of refugees, has made life difficult for the Kurdish government. He said with declining oil prices, oil exports were not a solution. He added, "When Gorran was established, their slogan was 'A social and just government.' Its position against corruption and income inequality made it popular, and it quickly became the main opposition. But in the last term, although it became a coalition partner, it did not deliver its promises. It couldn’t have. It started losing popularity and thought it could make up for it with street actions.”

Oguz noted that the traditionally good relations between Sulaimaniyah and Tehran also played a role in the crisis.

“I think we have key problems of corruption and income distribution in the region," he said. "All political parties are responsible. Gorran was represented by five ministers in the government, plus they had the parliamentary speaker post. How can one explain their efforts to expel the main partner of the coalition from the area, and threatening it with lynching, while we are surrounded by enemies?”

According to political analyst Siddik Hassan Sukru, who lives in Erbil, the crisis is caused by a deficiency in democracy. Answering Al-Monitor’s questions, Sukru claimed there are efforts to splinter the region. “Developments in the Middle East, the situation of Iraq and Kurdistan do not permit a return to dual governance, although there is heavy international pressure to do so. The US and Europe have high hopes for Kurdistan because it is fighting IS. They think Kurds can bring democracy and freedom to the Middle East. This region needs democratic culture more than money, guns and oil. Europe hopes that Kurdistan could be the primer of such a culture in the region. Kurdish intellectuals and politicians will not allow splitting Kurdistan and fratricide.”

Sukru said the United States and Europe have to intervene in the crisis. “America has to bring pressure,” said Sukru. “They are giving weapons to Kurdish parties. This could be one reason for the crisis. The party with heavier weapons could be a threat to others. Don’t forget that until today, there hasn’t been any state institution in Kurdistan. Everything was done by political parties. One party can instruct the police to prevent a minister from coming to his ministry. This is unprecedented. … The US and Europe have to press political parties to refrain from threatening others and claiming the upper hand. The US should tell them clearly that it is giving those guns to Kurds to fight IS, not each other.”

Economic problems in the region go back to 2014 when Baghdad stopped paying its agreed contribution to the Kurdish regional budget and accused the Kurds of exporting their own oil in violation of agreements. The economic situation worsened with IS attacks. Although Baghdad and Erbil reached an agreement on oil, Iraqi Prime Minister Haider al-Abadi said the government did not have enough funds and delayed sending a reduced Kurdish share. The Kurdish government responded by exporting its own oil. But when oil prices dropped to $50 a barrel, the Kurdish budget and income calculations were disrupted. That is why the salaries went unpaid.

The economic crisis is really biting, especially considering that more than 1 million people of a total population of more than 7 million live on government salaries.