Khalid Azizi, secretary-general of the Democratic Party of Iranian Kurdistan (KDPI), said Iranian forces ambushed Iranian peshmerga fighters, sparking a skirmish in September that resulted in casualties on both sides. 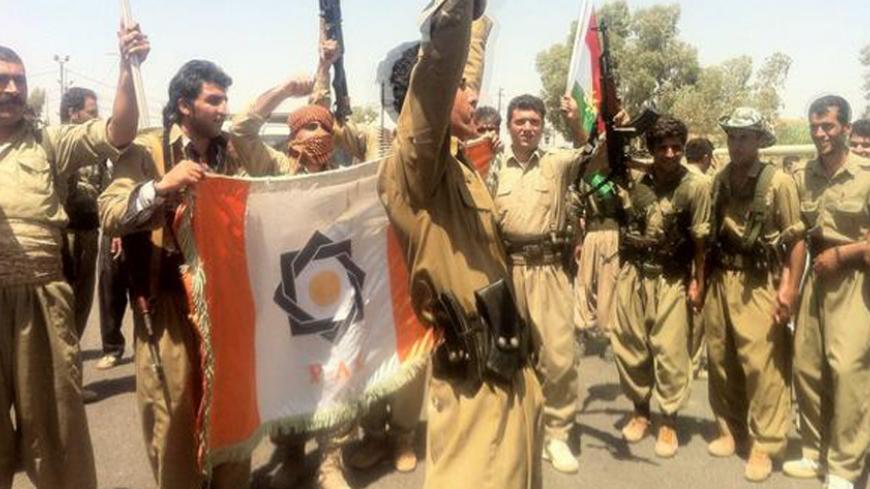 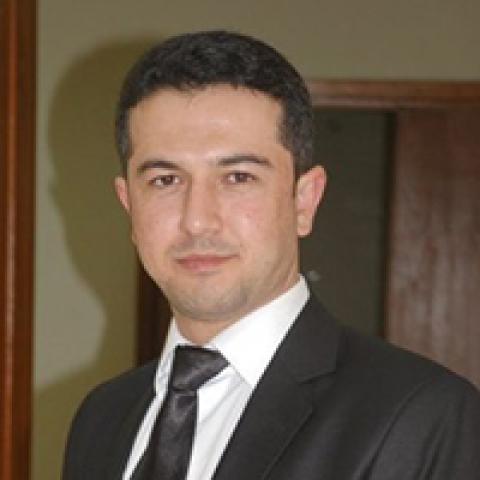 The head of the Iranian peshmerga said his forces acted in self-defense during rare clashes with Iranian forces on Sept. 13, which resulted in deaths on both sides.

No exact death toll has been released, but media reports said an Iranian commander and a peshmerga member were both killed in the fighting.

Speaking to Al-Monitor, Khalid Azizi, the secretary-general of the Democratic Party of Iranian Kurdistan (KDPI), said Iranian troops set ambushes for his peshmerga forces, prompting a response from the Kurdish guerrillas. “The Iranian government set ambushes for them [the peshmerga], which triggered the fighting that led to the killing of Iranian soldiers and of one of our members,” he said.

The Iranian Kurdish leader said he was committed to resolving issues with Tehran peacefully, saying, “We cannot destroy the Islamic Republic of Iran and it cannot destroy us, therefore both sides have to find a solution for this issue one day.”

Azizi denied he came under pressure from the Kurdistan Regional Government in Iraq to halt the fighting, but acknowledged, “We cannot use Kurdish lands [in Iraq] to launch attacks against Iran,” adding, “There is no doubt that we cannot ignore Erbil and Tehran’s interests, as the KRG and Iran have common borders and have to deal with each other, and we respect these relations. We will not conduct any armed attack against the Islamic Republic from the Kurdistan region of Iraq.”

The KDPI have not sent forces to help Iraqi Kurds battle the Islamic State, but are ready to help if they receive a request, Azizi said.

Azizi criticized the Kurdistan Workers Party (PKK) for moving its forces into Iraq without an official request from the KRG, and said it should pull its forces back to Turkey.

“Each part of Kurdistan has its own legal forces and peshmerga, and it is important not to create regional sensitivities here and there. If the PKK is indeed loyal to the other Kurdish parts, it should assist and support their parties without discrimination and without getting involved in the parties’ problems,” he said.

Al-Monitor:  There has been no fighting between you and the Iranian government since 1997. However, a clash occurred recently and a member of your peshmerga forces, an Iranian commander and some soldiers were killed. How did this fighting start?

Azizi:  First of all, I want to mention that we, as the KDPI, do not see war and fighting as a way to solve the Kurdish problem in eastern Kurdistan [Iranian Kurdish areas]. We believe that our problem will be solved in peaceful ways, democracy and negotiations. But following Iran’s attack against us, we had to respond. Our peshmerga forces have been present inside Iran for many years, but we never ordered them to fight or attack the Islamic Republic of Iran. We informed them to only defend themselves in case they are attacked. Fighting is not our policy, but self-defense is. Our peshmerga would walk between Kurdish cities in Iran, while our members carried out [peaceful] summer and spring activities in Iran. This year, the Iranian government set ambushes for them, which triggered the fighting that led to the killing of Iranian soldiers and of one of our members.

Al-Monitor:  So you did not attack them?

Azizi:  Attacking Iranian positions is not our policy; our policy is to be among the people and defending ourselves. They [the Iranians] set ambushes for us.

Al-Monitor:  Where exactly did the fighting occur?

Azizi:  On the outskirts of Mareewan, Shno and Sardasht [189 kilometers, or 117 miles, east of Erbil on the Iranian side of the Iraq-Iran border].

Al-Monitor:  Iran has not set ambushes or launched attacks against you in recent years. Why now, while the region is on fire and Iran is involved in one way or another in the wars in Syria and Iraq?

Azizi:  We had a similar incident last year, but there were no injuries or deaths. There was another ambush in Kamyaran three years ago, which led to the killing of several people. So this means that the recent fighting is not new, but this time, the media is paying close attention to the region in light of the Islamic State’s [IS] attacks in Iraq — while Iran is part of this equation.

Al-Monitor:  You are saying that you are against the war and want to gain your rights in a democratic way. Most Iranian Kurdish politicians say that Iran’s Islamic regime is a dictatorial one that rejects negotiations and democratic ways and refuses to sit with you. In light of this, how can you obtain your rights democratically?

Azizi:  We will keep trying. There are about 80 million people living in Iran — most of whom are Shiites — while Iranian Kurds constitute a minority. We want our calls for peace and negotiations to be heard by the people, especially those who believe in reforms. They should be aware of the solutions to the Kurdish problem, as the 35-year-long war did not achieve anything. We cannot destroy the Islamic Republic of Iran and it cannot destroy us, therefore both sides have to find a solution for this issue one day.

Al-Monitor:  You put an end to the fighting in 1997 and you are talking about peaceful solutions; have you been able to change Iran’s policy toward the Kurds since then?

Azizi:  Iran’s mentality cannot be changed by us, but there is a movement inside and outside Iran against the Islamic Republic. This movement is shedding light on the republic’s oppression of political freedom, execution of prisoners and suppression of women’s rights, all of which are rejected by the people. We cannot change the mentality of the Iranian government with our capabilities, but we are trying to win over these people who are against the regime through our messages.

When Hassan Rouhani became president, he vowed to guarantee political freedom and minorities’ rights, and provide education in local languages for the people. However, [Supreme Leader] Ayatollah Ali Khamenei, who is the root of power, did not allow that. And because we Kurds cannot change the political scene in Iran, we have to struggle to get the people to our side. We cannot address Khamenei or the Islamic Republic, which is why we turn to the Iranian people to let them know about the Kurds' fair share of imprisonment, execution and terror for 35 years. We want them to know why the Kurdish people are treated as such. This is how the concepts of fair treatment, understanding and peaceful methods will gradually become part of the culture in Iranian politics.

Al-Monitor:  There are reports that Iranian Kurdish parties are not fighting Iran because they do not believe this is the right way, not because they are pressured by the Kurdistan Regional Government in Iraq. Is this true?

Azizi:  There is no doubt that we cannot ignore Erbil and Tehran’s interests, since the KRG and Iran have common borders and have to deal with each other, and we respect these relations. Therefore, we are not against those interests, and we will not conduct any armed attack against the Islamic Republic from the Kurdistan Region of Iraq. What happens is inside Iran, many people are armed inside the country and the [Iranian] peshmerga has political activities and moves inside the country.

Al-Monitor:  So you are not under pressure?

Azizi:  In fact, there are no such pressures on us, but it is normal for the KRG to inform us that we cannot use its land to launch attacks against Iran. This demand is valid, as it is related to the security of the two countries’ borders, so we will refrain from attacking Iran.

Al-Monitor:  After the latest fighting in Iran — that most politicians and media outlets are saying was triggered by a peshmerga attack, while you say that it was the result of an Iranian ambush — the Patriotic Union of Kurdistan (PUK) requested you to withdraw your peshmerga forces from Iran. What was your response?

Azizi:  The PUK political bureau has not officially requested this from our bureau until now. It didn’t ask me either to withdraw the peshmerga forces. But it is normal for few PUK cadres to contact our cadres and tell them that such moves are against its interests. However, we have not received any official request.

Al-Monitor:  Has any PUK leader or bureau requested you to withdraw your peshmerga forces?

Azizi:  When IS attacked Kurdish areas, we issued a statement expressing our support to Kurdistan against IS. If Iraqi Kurdistan sees that it needs our peshmerga on the front lines, we will be ready. But we will not send our peshmerga forces without a request, given the legal system in Iraqi Kurdistan, its regional interests and relations. When it deems it necessary, it will ask for our help, but for now we think it is not the right thing to do without an official request.

On the other hand, the Kurdistan Region of Iraq has enough peshmerga on the frontlines, but there were shortages in sufficient weapons, so they don’t need our peshmerga. The important thing for us is that each part of Kurdistan has its own characteristics and the Kurdish parties should respect that. We do not get involved in the problems of any other part of Kurdistan unless the president, parliament or government ask us to do so. Then, we will send our peshmerga forces. For us, this is the right way to operate. Even in Syria and Kobani, it is not the duty of the KDPI to send forces, as it will lead to anarchy that will obstruct the resolution of the Kurdish issue. Therefore, each part of Kurdistan should follow its own characteristics.

Al-Monitor:  The PKK sent its forces directly without an official agreement from Iraqi Kurdistan.

Azizi:  It is better for the PKK to relocate its forces to northern Kurdistan [Turkey], because it is a northern Kurdish party. I hope that it will not meddle in the affairs of other Kurdish areas, as it is not in the best interest of the Kurds. Each part of Kurdistan has its own legal forces and peshmerga, and it is important not to create regional sensitivities here and there. If the PKK is indeed loyal to the other Kurdish parts, it should assist and support their parties without discrimination and without getting involved in the parties’ problems.

Al-Monitor:  How have the negotiations between Iran and the West affected the internal situation in Iran?