In the wake of a massive assault on the Islamic State for the city of Sinjar, Iraq, there is speculation about how disagreements among Kurdish factions will play out. 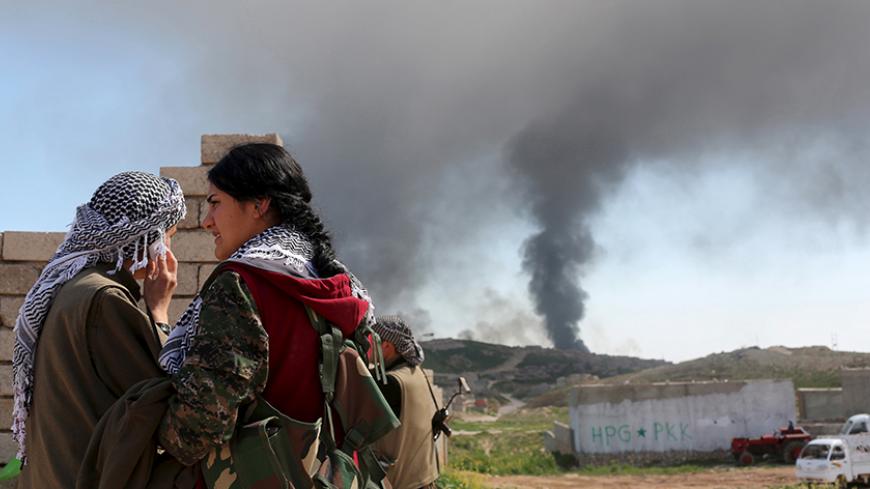 Some 7,500 peshmerga of Iraq's Kurdistan Democratic Party (KDP) launched an assault against the Islamic State (IS) in Sinjar, Iraq, on Nov. 12. Jets from the US-led coalition have been carrying out heavy airstrikes for weeks in preparation for the operation. US officials estimate there are some 400 to 550 IS militants in the town.

Fighters affiliated with the Kurdistan Workers Party (PKK) have positions in the city, but Kurdish peshmerga forces launching the offensive reportedly are not cooperating with them. If the drive to liberate the city is successful, recent history makes some wonder how aggressively various factions in the region would vie for influence in the strategic city.

Sinjar, or Shengal as the Kurds call it, is the largest Yazidi settlement in the world. It is in the middle of the Mesopotamian plain. After IS drew global attention with its capture of Iraq’s second-largest city, Mosul, in June 2014, IS turned its attention to Sinjar.

After capturing villages one by one on the way to Sinjar, IS deployed troops heavily within 200 yards of Sinjar’s fringes. It pounded the fringes with mortar fire, and on Aug. 3, 2014, IS attacked the town's center. Thousands of people were killed and thousands more had to flee. When the Kurdistan Regional Government (KRG) withdrew its troops, the town was left defenseless. The People's Protection Units (YPG) — the Syrian extension of the PKK — rushed to help.

Taking advantage of Sinjar's proximity to the Syrian border, the YPG opened a corridor through IS lines and evacuated the Yazidis. Some units of the PKK hurried from their main base at the Qandil Mountains, and the Kurdish peshmerga sent its special forces. Kurdish groups overcame their initial shock and deployed around Sinjar. IS reacted with counterattacks against the Kurds but did not succeed. Since then, Kurdish groups have launched attacks to recover the town but could not recapture more than a few neighborhoods while the main part of the town stayed in IS hands.

Even with the air support provided by the coalition air force, Sinjar couldn’t be liberated.

Kurdish forces were constantly making plans to fully secure the town. A decision was made to launch the operation on Nov. 3, but that was postponed. What was holding back the operation?

It became evident that the delays were caused by a disagreement between the PKK and the KRG. The KRG said it had deployed more than 10,000 peshmerga to the area and was demanding that the PKK leave the area. The PKK did not agree.

What was behind the PKK’s deep interest in Sinjar? Yazidis, because of their Kurdish roots and religious beliefs, have been the most oppressed people of the region. They decided to get organized in the first years of the new century and were embraced by the PKK, which opened the way to PKK influence in the Sinjar area. But the PKK left, fearing the US attacks in the area. Meanwhile, many Yazidi youth had joined the PKK. The IS offensive against Sinjar provided the PKK with another opportunity to return. Also, the Yazidis, who were upset with the KRG for withdrawing the peshmerga, welcomed the PKK’s return. An armed group called the Shengal Resistance Units made up of Yazidis was formed.

Another reason for the PKK’s interest in Sinjar is its proximity to the Syrian border. The most practical route to pro-PKK groups in Syria goes through Sinjar, hence the PKK’s determination to stay.

Recently, the KRG and the PKK tried again to find a solution but failed. According to reports, the PKK laid down two conditions to be met for it to leave the area: to take part in the operation to liberate Sinjar, and official recognition of the Shengal Resistance Units. Heval Agid, the PKK official in charge of Sinjar, said the PKK will fight any effort to remove it from the area. He added the PKK had officially declared that it would leave the town after it was liberated.

Serbest Lezgin, a peshmerga commander at Sinjar, rejected the PKK conditions. Lezgin told Al-Monitor that KRG President Massoud Barzani did not want the Kurdish parties to clash and ordered that operational plans be altered if necessary.

“Massoud Barzani told us not to fight with the PKK. We don’t want fratricide. Never. That is President Barzani’s red line. The PKK is in the area. They are visible. They see themselves as [a] permanent fixture. They set up outposts and hoisted their flags. This is not appropriate for this area,” Lezgin said.

He added, “South Kurdistan is an official territory [of the KRG] with its own administration and institutions. The PKK is not pleased with that. They are saying they will stay until the liberation of Sinjar and will then leave, but it doesn’t look that way. They are thinking of staying here and [becoming] sovereign.”

According to Siddik Hasan Sukru, a political analyst living in the KRG capital of Erbil, Sinjar is as important to Turkey as it is to the YPG and the PKK. Sukru told Al-Monitor that he believes Turkey has played a part in the disagreement between the Kurdish parties.

He said, “If Sinjar stays in the hands of the PKK or its partisans, it will be a gate between Rojava [Syrian Kurdistan] and Iraq. It will provide Rojava with an outlet to the outside world. But if the KDP dominates Sinjar, with the Semelka [border] gate already in peshmerga hands, the YPG and the PYD will be encircled." The PYD is the US-supported Kurdish nationalist Democratic Union Party.

“Turkey doesn’t mind Sinjar being controlled by the Kurds as long as it is not the PKK, but rather the peshmerga, in charge. There is also a national sentiment issue. Everybody was saying the KDP did not protect the Yazidis and fled. They were protected by the PKK and the YPG. This became a matter of political prestige. The KDP is determined to preserve its prestige by staying firm in Sinjar,” Sukru said in an interview Nov. 11, the day before the massive offensive against IS was launched.

However, Sukru doesn’t think there will be clashes between Kurdish parties. “The KDP can disrupt PKK activities in other areas and restrict their logistics. Disagreement will continue in the political arena, but there will be no clashes. If clashes break out, other groups will be drawn into it and this will be against the KDP’s interests,” he added.