Who's fighting whom in Iraq's Sinjar?

After KRG Prime Minister Nechirvan Barzani warned that the KRG may resort to force to expel the Kurdistan Workers Party from Sinjar, tensions rose in the region. 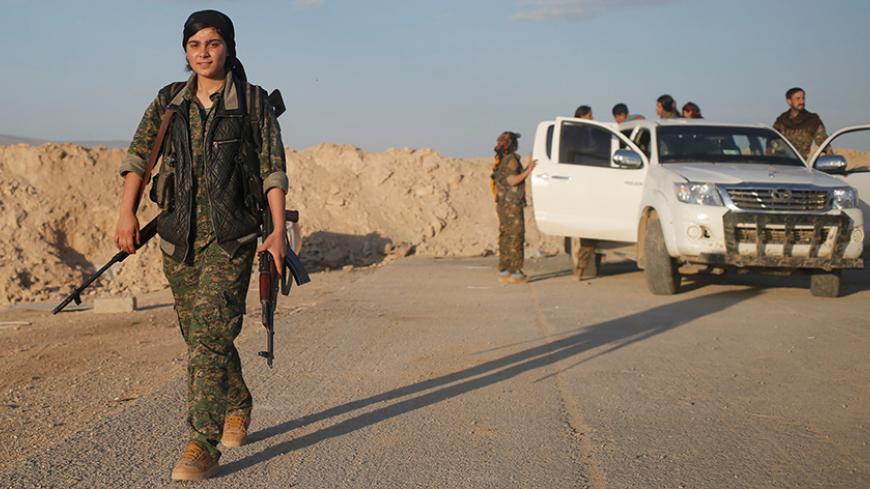 A member of the Sinjar Resistance Units, a militia affiliated with the Kurdistan Workers Party, carries a sniper rifle and an AK-47 in the village of Umm al-Dhiban, northern Iraq, April 29, 2016. - REUTERS/Goran Tomasevic

DIYARBAKIR, Turkey — In an interview with Al-Monitor, Kurdistan Regional Government (KRG) Prime Minister Nechirvan Barzani said that the KRG may resort to force to make the Kurdistan Workers Party (PKK) withdraw from Sinjar. This has raised tensions in the area.

The Kurdistan Democratic Party (KDP) and the PKK cannot share Sinjar. Administratively, Sinjar is not attached to the Kurdish region. It is one of the disputed locations whose status will be decided by a referendum. When the town close to the Syrian border in northern Iraq was occupied by the Islamic State (IS) in 2014, the PKK and KRG forces intervened together. After IS was ousted from the town, the PKK refused to leave, despite warnings from the KRG.

The problem of Sinjar rose between Syria and Iraq after World War I, when both countries demanded to control it. But after borders were demarcated, it was forgotten. The PKK appeared years later to make use of Sinjar’s proximity to the Syrian border. The fact that the majority of the people in Sinjar were Yazidis provided an edge to the PKK. According to Muslims, Yazidis are pagans who worship the devil. The PKK embraced the Yazidis, which provided the Kurdish organization with a popular base. In 1998, although some PKK members took up residence in Sinjar, they didn’t stay for long because of their internal problems: Syria recognized the PKK as a terrorist organization in 1998, and Syrian President Hafez al-Assad expelled PKK leader Abdullah Ocalan. After 2000, the PKK tried once more to enter Sinjar, but that, too, was foiled under pressure from the United States and Turkey. The PKK was getting organized among the Yazidis, but it couldn’t settle down in the town. Why does the PKK want Sinjar so much?

Syria is why the PKK wants to control Sinjar. This became even more important after PKK-affiliated groups started to dominate the Kurdish-populated parts of Syria. Sinjar provides a defensive line and also a logistics hub for the area the PKK calls Rojava. Should the PKK control it, Sinjar would also become a key connection route between its camps in Iraqi Kurdistan and Syria.

The KDP wants Sinjar because it wants to win the Yazidis who were angered when peshmerga forces withdrew when IS attacked Sinjar. The KRG also wants to be near Syria. There has been tension in the region for years between the PKK, which dominates most parts of the region, and the pro-KDP groups. If the KDP ever controls Sinjar, its influence in the region could expand.

Kamuran Mentik of the Political Sciences Faculty of Salahuddin University, said the problem was between Turkey and the Kurds.

“[Sinjar] is strategically vital for western Kurdistan [Syria]. It is the rear support base for western Kurdistan. Turkey wants to isolate western Kurdistan by controlling [Sinjar], even indirectly. That is the idea behind igniting a war by using the KDP to expel the PKK or Rojava Kurds from there. No doubt Iran has a part in this process. Iran wants to remain far removed from the Syrian war. Turkey is planning to attack the Qandil Mountains in the coming spring. Qandil is closer to Iran geopolitically. Iran doesn’t want Turkey in Qandil close to Iran,” Mentik told Al-Monitor.

Mentik believes the tension between the parties is fought through the media and will not lead to armed confrontation. “The KDP is in bad shape. A war will not be in its interest. Most of their media messages are addressed to Turkey, not to each other. If the Kurds don’t want to fight each other, then the PKK and the KDP have to sit down and talk. People don’t want a war. The KDP seems to have lost its own free will. Turkey wants the KDP to fight,” he added.

Former Kurdistan parliament member Aso Kerim said with the ousting of IS, the PKK’s mission has ended. Stating that all the areas controlled by the PKK are vulnerable to the Kurds, “A PKK withdrawal in coordination with the KRG will be welcomed. The Turkish government has openly said it will not allow a second Qandil structure at Sinjar. The PKK has to take these threats seriously,” Kerim told Al-Monitor.

Kerim doesn’t believe Iran and Turkey are behind the scenes at Sinjar, adding, “I don’t believe the PKK is fighting for Iran nor the KDP/KRG for Turkey. The problem is Iraq, Iran and Turkey are instigating problems and tensions among the Kurdish parties for their own interests. But I don’t think tensions will lead to clashes between the Kurds. The PKK will not give pretext to Turkey and others to turn Kurdistan into a battlefield. It is important for the PKK to withdraw its forces,” he added.

According to political observers in the region, Iran will not allow the PKK to withdraw from Sinjar and redeploy to Qandil. The PKK will then become a target for Iran. Turkey does want a new PKK base in Sinjar. Will this tension between the Kurds become a war?

A senior KDP official who spoke to Al-Monitor on condition of anonymity said such a war is not likely. “We won’t have an internecine war. [Iraqi Kurdistan President] Massoud Barzani has issued strict orders against it,” he said.

Some local Iraqi Kurdish sources told Al-Monitor that the parties are actually holding secret meetings to solve the problem. This was verified also by senior PKK leader Murat Karayilan in a statement. “We are actually talking to each other. We have told them that once the talks are concluded, that we as the HPG [People's Defense Forces, the PKK’s military wing] will withdraw our forces,” Karayilan said in his statement.

So at the end, the PKK will withdraw. But it is not easy for the PKK to give up Sinjar. Even if it withdraws its fighters, it will continue with its efforts to discreetly build a robust organization in Sinjar.