The PKK and its affiliates have proven to be the most capable Kurdish fighting force in confronting the Islamic State. 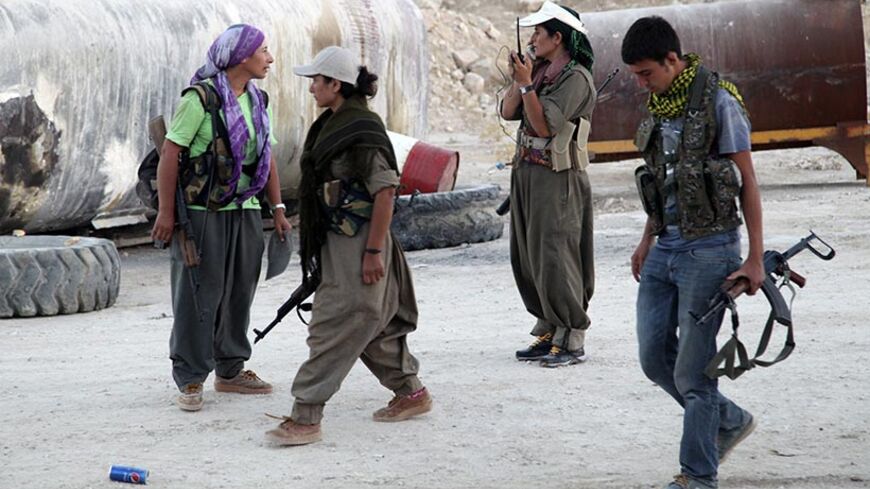 MAKHMOUR, Iraq — Ahmed Mohammed was staring at the corpses of two fighters from the Islamic State (IS), dumped in a natural ditch just a short distance from the town of Makhmour, about 50 kilometers (30 miles) from Iraqi Kurdistan’s capital city, Erbil.

“We killed seven of them, but just brought back these two bodies to boost up people’s morale here,” said Mohammed, a nom de guerre, with his AK-47 rifle hanging on his shoulder.

He was a member of a fighting force in Makhmour affiliated with the Kurdistan Workers Party (PKK), a rebel group whose guerrillas have honed their skills fighting the Turkish military, NATO’s second-largest, for Kurdish rights for around three decades.

And there was acknowledgement here of their abilities.

“They have very skilled snipers,” said an assistant to a senior Iraqi Kurdish military official in the area. “They shot these [IS] guys.”

Just a few yards away, male and female combatants had gathered, wearing the traditional gray uniforms that PKK fighters typically wear. They were mostly residents of a refugee camp inhabited by Kurdish refugees who had escaped Turkish military operations in their area around two decades ago.

“There are 30 to 40 guerrillas here,” said Hussein Rebar, a camp resident and one of the leaders of the fighters here.

The “guerrillas” Hussein was referring to were battle-hardened fighters who had arrived in Makhmour from the Kandil Mountains that straddles the Iraqi-Iranian-Turkish border areas to the east.

Hussein, like others, was unwilling to pinpoint them, simply saying in a low tone that they were fighting in the camp that lies a few miles to the east.

“They attacked the camp this morning, but our fighters repelled them and destroyed two of their cars,” Hussein said. The vast majority of camp residents fled on the night of Aug. 6 when they heard the news of IS’ assault.

The PKK has reportedly relied on Makhmour camp, with a population of over 10,000 people, as a base for recruitment. But the PKK and its affiliates’ participation in the fight against IS is not only limited to Makhmour.

“Our forces are in Sinjar, Makhmour and Kirkuk,” Demhat Agid, a PKK spokesman based in the Kandil mountain range, told Al-Monitor.

In an acknowledgement of the PKK fighters’ contribution to retaking Makhmour from the Islamist militants on Aug. 10, Iraqi Kurdistan’s President Massoud Barzani paid a visit to the camp on Aug. 13 and met with senior commanders there.

The unexpected and quick defeat of the Kurdish peshmerga forces in Sinjar, which was until recently populated mainly by followers of the ancient Yazidi Mesopotamian faith, prompted the Syrian Kurdish People’s Protection Units (YPG) to jump into the scene. The YPG has been successfully battling IS and other radical jihadist forces in northern Syria for about two years. The YPG and its parent organization, the Democratic Union Party (PYD), are widely believed to be affiliated with the PKK.

“After IS stormed Sinjar and the peshmerga withdrew from there, a security vacuum emerged and the Yazidis faced the threat of a huge massacre. So, we decided to move in,” said Redur Khalil, YPG’s spokesman, in a phone interview with Al-Monitor from Syria’s Kurdish region.

The YPG and PKK have even formed a special force, the Sinjar Defense Units, to defend Sinjar.

When tens of thousands of Yazidi civilians were trapped on Sinjar Mountain drawing international attention, it appeared to be mainly YPG forces who managed to clear a corridor through IS-held territory stretching all the way from the Syrian border to the mountain. Images of YPG and PKK fighters rescuing the horrified Yazidis have gone viral on Kurdish social media accounts, gaining the group a lot of sympathy and respect among Kurds.

And it is not only PKK and its affiliates that are taking part in fending off the existential threat that IS is posing to Iraqi Kurdistan.

Fighters from Iranian Kurdish opposition groups based in Iraqi Kurdistan have also rushed to the front lines and played a significant role in wresting control of the Gwer area, just some 40 kilometers (25 miles) from Erbil. Some of these fighters fought against Iranian forces in the early years following the 1979 revolution in Iran.

“Given IS’ attacks and threats it posed, we considered it our duty to help the people and government of Iraqi Kurdistan,” Mohammad Saleh Qaderi, a senior official in the Kurdistan Democratic Party of Iran, told Al-Monitor.

Access to Iranian Kurdish fighters has been very limited and many of them are now said to have withdrawn from the fronts in an attempt by Iraqi Kurdish authorities to not upset their powerful neighbor, Iran.

For the time being, Iraqi Kurds appear to need all the help they can get to ward off the IS threat. Despite the newfound unity, Kurdish parties from different parts of the region have had a long history of internal rivalries and bloody conflicts among themselves. But the IS threat has created a loose alliance among different Kurdish groups. Such alliances in the oft-shifting and mercurial world of Middle East politics are not uncommon when dramatic events at times push rivals overnight into each other’s arms.

The PKK presence on Iraqi Kurdistan’s soil could have long-term repercussions. The PKK is on the terrorist organization list of the United States, the European Union and Turkey, countries with which Iraqi Kurdistan’s government is on good terms. The Turkish Kurdish group entered the northern edges of Iraqi Kurdistan’s territories in the late 1980s and has stayed there. Intermittent rounds of fighting have erupted between the PKK and Iraqi Kurdish groups ever since. The PKK and Iraq’s Kurdistan Democratic Party (KDP), led by Barzani, have been particularly locked in a struggle for years for the domination of the Kurdish political scene in the Middle East.

As to the future of the PKK’s presence in the areas where it is currently fighting, the group’s spokesman Demhat Agid said, “When there are no more [IS] attacks left, then the issue [of our presence] needs to be discussed and a decision will be made in that regard.”

For the moment, PKK and YPG forces do not plan to leave the battleground in northern Iraq.

“IS changed the borders set by colonialists and changed the region’s geographical map,” said Khalil, the YPG spokesman. “Therefore, our presence [in response to that] should not be seen as an encroachment on any country.”