Kurds prepare for counteroffensive as US strikes IS

US airstrikes against the Islamic State (IS) have boosted the morale of Iraqi Kurdish peshmerga forces that are getting ready for a counteroffensive to regain lost territory. 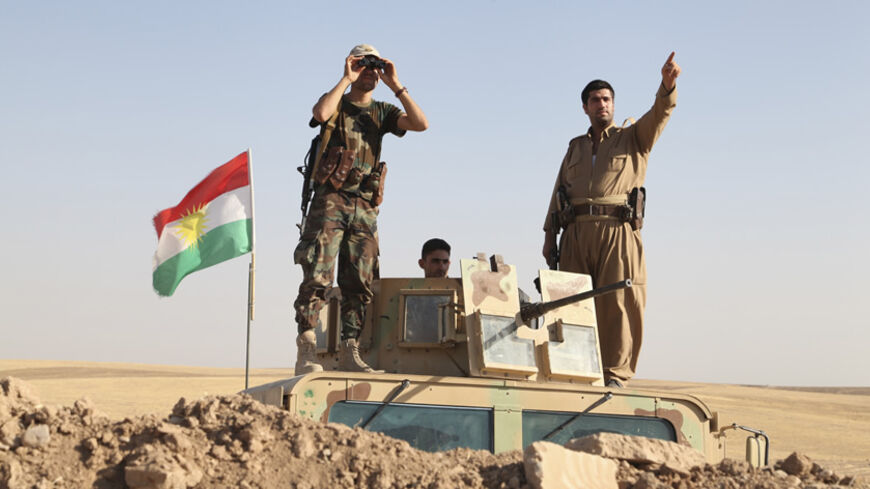 MAKHMOUR, Iraq — As US warplanes are launching rounds of airstrikes on Islamic State (IS) targets in northern Iraq, Kurdish peshmerga armed forces appear to be gradually preparing to launch counteroffensives to regain areas they conceded to the jihadist group.

Since Aug. 2, IS militants made forays into the peshmerga-controlled territories of the Ninevah plains, seizing control of the key areas of Sinjar, Zummar and Wana in western Ninevah, and moving into the towns of Hamdaiya, Telkayf, Bartalla and Bashiqa on the north and east of Mosul. IS also made gains in Makhmour and Gwer, roughly 50 kilometers (31 miles) southwest of Iraqi Kurdistan’s capital city, Erbil. As of Aug. 10, Gwer had returned to peshmerga control.

The US military has confirmed that its aircraft have attacked IS positions around Makhmour and Sinjar since Aug. 8, and Kurdish forces say IS militants have also been targeted near Khazir, some 40 kilometers (25 miles) west of Erbil.

“US airstrikes have strengthened the peshmerga’s morale,” said a close aide to a senior peshmerga commander on the Makhmour front, who did not want to be named as he was not authorized to speak to the media. “The peshmerga are now waiting for an order to attack IS positions and move forward. They are waiting for the zero hour.”

The source, who has been in the area for the past several weeks, added that peshmerga forces have now advanced beyond the Qarachukh Mountains and are in control of the eastern flank of Makhmour. The mountain range separates Makhmour from the highway that heads toward Erbil.

Although IS forces took Sinjar and Zummar following some degree of fighting with peshmerga troops, a number of Kurdish officials told Al-Monitor the withdrawals in areas north and east of Mosul and southwest of Erbil have been tactical for retreat to the surrounding mountains where a more effective defense can be set up.

“[This also serves as protection] for the peshmerga as air raids are conducted against IS positions,” said Saeed Mamuzini, a senior official in the Mosul branch of the Kurdistan Democratic Party (KDP) who is currently based alongside peshmerga forces in the Bashiqa Mountains near the town of Bashiqa in eastern Ninevah.

Mamuzini said some limited fighting occurred on Aug. 9 between the peshmerga and IS fighters after a unit of Kurdish forces descended into Bashiqa from the mountains to strike an IS unit and withdrew later.

The limited advances in Makhmour and Bashiqa might be modest signs of efforts for a possible broader campaign to expel IS forces from the areas they control. Kurdish forces hope the US attacks will seriously undermine the Islamic State's operational and defense capacities so they can begin to advance.

“US attacks have decreased the amount of IS movements on the front lines,” said Mamuzini. “The peshmerga have made plans and things will be changing within a few days.”

Islamist militants have also controlled at least parts of the Mosul dam, Iraq’s largest hydropower dam facility that provides electricity and drinking water for Mosul and parts of the Ninevah plains.

In a press conference in Erbil, Fuad Hussein, chief of staff to Kurdistan Regional Government President Massoud Barzani, told reporters on Aug. 8 that IS was now in control of the dam.

“They wanted to move toward Erbil after taking over the dam but their plans were halted [following US air raids],” Hussein said, alongside Iraq’s Kurdish foreign minister, Hoshyar Zebari. Hussein also said Kurdish peshmerga will push back the jihadist groups in the coming days without providing further details.

While the news of the Islamic State's control of the Mosul dam has created concerns in the country, Mamuzini told Al-Monitor that the militants do not control the whole dam, which is built in the turquoise waters of Mosul Lake in the heart of the Ninevah plains. He added that the peshmerga still maintain control of parts of the dam. The claims could not be verified by Al-Monitor as the area lies largely under IS control.

Many Kurds, both at the popular and official levels, appear to have been taken by surprise by the Islamic State's offensive capabilities. Zebari said on Aug. 8 at the same press conference that the Kurdish peshmerga's firepower does not match the Islamic State's as the militants possess mighty weapons such as tanks and long-range artillery pieces captured from the Iraqi army.

“IS needs to be taken seriously because they have a lot of weapons,” he warned at the same press conference.

“IS is different and more powerful than al-Qaeda. They are well trained and have advanced weapons.”

As the peshmerga are overwhelmed in the fight against IS, hundreds of fighters from the Syrian Kurdish People’s Protection Units (YPG) and Kurdistan Workers Party (PKK) have taken to the battlefields of Sinjar and Rabia close to the Syrian border and around Erbil.

Thousands of volunteers have also beefed up defense lines in the areas bordering IS zones in what is an extensive war for Kurds.

A combination of peshmerga and YPG forces have succeeded in reaching the Sinjar Mountains and have so far rescued around 5,000 Yazidis trapped on a mountaintop surrounded by IS militants.

It is difficult to obtain an exact figure as to the number of civilians stuck on the mountain, but some United Nations’ estimates point to as many as 35,000 to 200,000 who have been stranded there with little food and water supplies. UNICEF said around 60 children have died there so far. An airdrop humanitarian campaign underway for days to provide food and water to the refugees has been boosted since the US military joined the efforts on Aug. 8.