After taking Sinjar, IS draws Iraqi Kurds into full-scale war

The rout of peshmerga forces in Sinjar has drawn accusations of abandonment from Yazidis and forced Iraqi Kurdistan to engage the Islamic State just miles from Erbil. 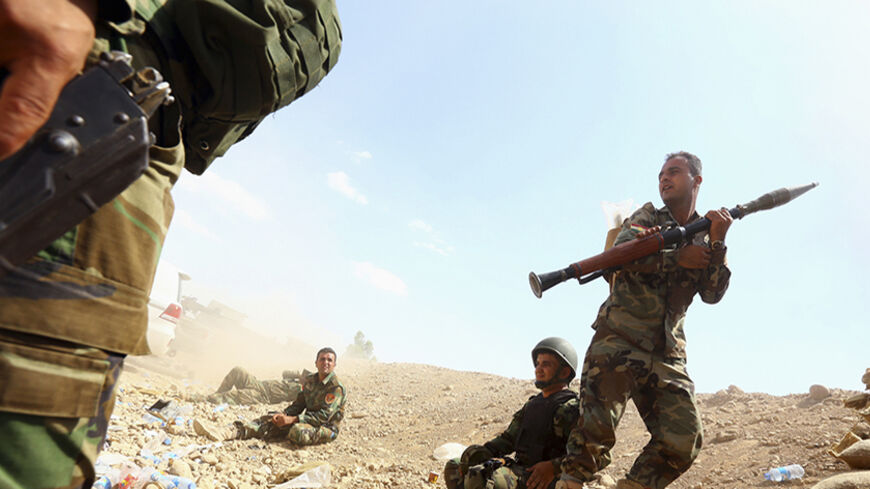 Kurdish peshmerga troops are deployed against Islamic State militants on the outskirts of the province of Ninevah, Aug. 6, 2014. - REUTERS

ERBIL, Iraq — Iraqi Kurdistan appears to be in a state of all-out war as its peshmerga forces have engaged in heavy clashes with Islamic State (IS) militants along a nearly 1,050-km (652-mile) line stretching all the way from the Syrian border in the west to areas close to the Iranian border in the east.

For the first time in the past couple of months, IS fighters attacked areas near Gwer district on the evening of Aug. 6 just some 50 kilometers (31 miles) west of Iraqi Kurdistan’s capital city, Erbil. They seized some villages in the Gwer area, according to Kurdish officials, and fighting is still ongoing in the area.

The chairman of the Peshmerga Affairs Committee in the Kurdistan parliament, Ari Harsin, told Al-Monitor Aug. 7 that the center of Gwer is under peshmerga control. He said peshmerga forces had succeeded in taking back some villages in Gwer, but this assertion could not be immediately verified.

As news of IS’ advance toward Gwer spread on Wednesday night, Erbil residents panicked. The mass influx of residents of the Gwer and Makhmour areas into Erbil intensified the general anxiety. Some people left for nearby mountainous towns to the east and long queues formed at gas stations. At the same time, many civilians took to the streets to boost morale and some engaged in a campaign of shaming those who were leaving the city. Many volunteers, especially men from Gwer and Makhmour, also joined the front lines in the area and the peshmerga ranks have been reinforced. Senior Kurdish officials also went to Makhmour, less than an hour’s drive from Erbil, and appeared on TV to calm and reassure the population that the peshmerga forces were in control.

“[The Islamic State's] most successful tactic has been their propaganda,” Harsin said as he headed toward Makhmour Thursday morning. “They scare people that way; otherwise, they don’t have a large fighting force.”

When Sunni militants led by IS swept Mosul and other areas in northwestern and central Iraq in June, many in Iraqi Kurdistan did not think the jihadist forces would be able to take on Kurdish security forces in a large-scale campaign.

But less than two months later, it has become apparent that the jihadist group plans to expand its caliphate to include the Kurdistan Region. IS fighters have been able to wrest some territory from Kurdish troops in Sinjar and Zummar near the Syrian border in western Ninevah province.

Sinjar's fall on Aug. 3 sent shock waves among Iraqi Kurds at a time when it appeared as though their troops were solidly in control of the areas. Following the successful IS attacks in the area, Kurdistan Regional Government President Massoud Barzani declared war on the extremist group.

“We decided to go beyond the defensive position and fight terrorists to the last breath,” Barzani said in an Aug. 4 statement. “We have ordered the peshmerga forces to attack the terrorists and the enemies of the people and the land of Kurdistan with all their power.”

Following Barzani’s order, peshmerga forces changed strategy and are now launching offensives on several fronts, from areas around Rabia, Sinjar and Zummar to the northern and eastern outskirts of Mosul all the way down to Makhmour, southwest of Erbil.

Al-Monitor visited some areas near Zummar and Rabia on Aug. 4 and found that hundreds of soldiers with heavy weaponry in addition to armed civilian volunteers had been deployed to the front lines and nearby areas.

Kurdish forces control the areas around the lake in Mosul, where Iraq’s largest dam is located. The fault line between Kurdish troops and IS in Kirkuk and Diyala provinces is currently relatively calmer, but those areas have witnessed heavy fighting in recent weeks as well.

The fall of Sinjar has led to a sense of outrage among Kurds, and many ask why the peshmerga forces evacuated the area. As IS militants stormed Sinjar, tens of thousands of the area’s residents abandoned their homes for other towns controlled by Kurdish forces.

There appears to be a broad consensus that some military officials in the Sinjar area had not carried out their tasks properly. Harsin said some senior military commanders have been suspended from their positions and that an investigation is ongoing.

“A soldier’s duty is to defend his country, and if he fails to do that he has not carried out his duty properly and has to be held accountable,” said Harsin, who declined to name the suspended senior Kurdish officers.

The majority of Sinjar’s population adheres to the ancient Mesopotamian Yazidi faith, which predates Islam and Christianity. Yazidis are viewed as infidels by the jihadists.

Although no reliable figures are available, some media reports suggest that the militants have killed hundreds of Yazidi civilians and have taken scores of Yazidi women as spoils of war. Many Yazidis feel betrayed by the peshmerga’s pullout from their areas and say that little resistance had been put up.

“Thousands of forces were there,” said Elias Babasheikh, a prominent Yazidi figure in the Shekhan area, north of Mosul. “How did they leave the area to IS within hours and leave people [at the hands of] IS?”

Some peshmerga officials in the area say they did not just walk away from Sinjar without a fight.

“There was heavy resistance in Sinjar for nearly two months. IS relies on that whole area a lot for moving between the Iraqi and Syrian borders,” Halgurd Khidir Zahir, the commander of the area's Safin Division of peshmerga, told Al-Monitor. He added that IS fighters have more advanced weapons at their disposal, with many US-made arms seized from the Iraqi army in Mosul.

Iraqi warplanes have also bombed IS positions in Ninevah as there appears to be some cooperation between the Iraqi military and the Kurds.

“Everything can happen in a war. It’s not always success,” Zahir said.

An IS statement also announced that the group had taken Sinjar after “heavy battles.”

Since the evening of Aug. 3, peshmerga forces have launched a broad counteroffensive around Zummar, Rabia and Sinjar. On the night of Aug. 6, a Kurdish peshmerga commander told the Kurdish Rudaw news network that his forces had reached a mountain on the outskirts of Sinjar, where UN reports say as many as 200,000 Yazidis are stranded with little food and water.

Forces from the Syrian Kurdish People's Protection Units (YPG) are also engaged in the fight in Sinjar and Rabia. Pro-YPG media sources say the group played a major role in the fight, but while acknowledging some involvement, Iraqi Kurdish officials say the YPG did not participate on a large scale.

Zahir confirmed to Al-Monitor that there has been cooperation between peshmerga forces and the YPG, saying, “There is some limited cooperation. We are both based alongside the border and are close to each other.” He added that Iraqi Kurdish peshmerga forces are capable of retaking lost ground.

“Some things are temporary. I might not be here today but will get back tomorrow,” Zahir said in a school turned into a makeshift base in the village of Omar Khalid, near Zummar.