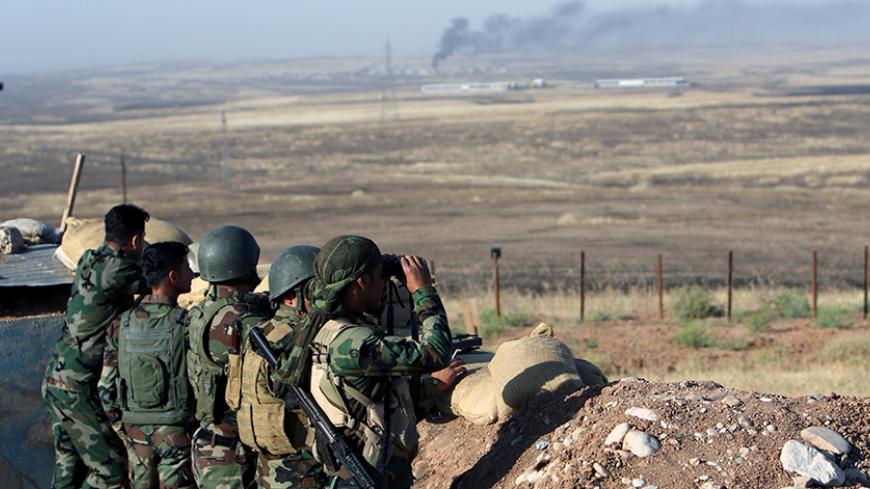 MANGUBA VILLAGE, Iraq — Three ambulances rushed through the last checkpoint and another, sirens blaring, exited at the Khazir front on the morning of May 29. A military operation, part of a push toward Mosul in Iraq’s northwestern Ninevah province, had started a few hours earlier, around 5 a.m., and would continue into the following day. Trucks rushed to and from the front, with light-reflecting sheets covering their hoods to prevent aircraft from the US-led international coalition from mistaking them for Islamic State (IS) vehicles.

“Around 6,000 peshmerga and [the elite paramilitary] Zerevani forces are involved,” Gen. Sheikh Ato Zebari, the deputy head of the Khazir front, told Al-Monitor at a nearby base. Gen. Dedewan Khorsheed Tofeq added that the operation west of Erbil would push IS farther from Gwer and the capital of the Kurdistan Regional Government (KRG), enabling more freedom of movement for forces hoping to push toward Mosul, Iraq’s second-largest city, still firmly under IS control.

The two-day operation was the largest the peshmerga had taken part in since the campaign to liberate Sinjar in November. The aim at the moment, Zebari said, was to retake several villages that had been inhabited by Kakai and Shabak, Kurdish minority groups, as well as other Kurds and Christians, before IS captured them in June 2014. The territory involved covers some 14 miles, from the village of Hassan Shami to Wardak. The area had been disputed by the Iraqi central government and the KRG prior to IS seizing Mosul and the surrounding area in summer 2014.

“The offensive should result in control over both sides of the Khazir River and prepare the way for successive stages toward the long-anticipated retaking of Mosul,” Zebari said. “Support from Canadian, French, British and US aircraft are playing an extremely important role in the operation, while the main problems are IEDs [improvised explosive devices] and suicide bombers.” Tofeq added that IS had recently been using a significant number of suicide bombers on motorcycles, posing a threat to areas near the capital.

As for the possibility of any civilians being left in the villages, Zebari said, “Since the inhabitants were all Shabak, Kakai and Kurdish, they all left in 2014 when IS took them over. They’re IDPs [internally displaced persons] in the KRG now.”

At a high point close to the front line just outside Manguba village, several armed volunteers from the Kurdistan Democratic Party (KDP), wearing traditional baggy attire in hues matching the surrounding fields, watched the smoke rise from mortar strikes and fires sparked by the fighting on the dry terrain.

A 62-year-old armed with a Russian pistol and with black-and-white checkered keffiyeh around his head identified himself as KDP's staff for Tel Aswad and the village of Maguba, one of the first villages retaken that morning. He said that he and his companions had been prohibited from taking part in the fighting, explaining, “Untrained fighters just end up creating chaos.” This was a lesson learned from previous battles, but they nonetheless stood willing and armed. The men watched the billowing smoke a few miles away with unveiled enthusiasm.

Another of the local volunteers, Ali Milham, from the KDP office in the nearby IS-held village of Bartala, spoke on the phone with people he said were in Mosul and with whom he kept in contact for information purposes. He said that many were trying to escape the city, heading for Kurdish-held territory in Syria.

A vehicle-mounted Grad rocket launcher had been positioned at a vantage point near the base from which officers, an adviser to the president on engineering and a few local leaders monitored operations. 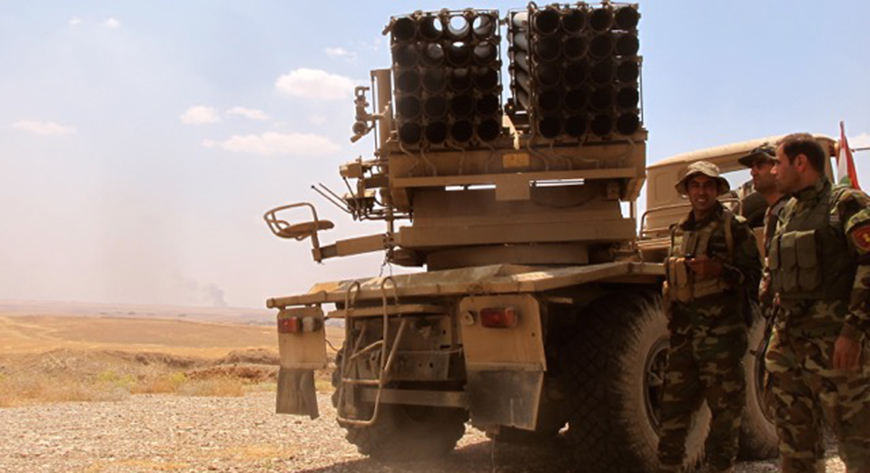 Peshmerga stand next to a Grad rocket launcher near the Khazir front, in northwestern Iraq, during an operation in the prelude to liberating Mosul from the Islamic State, May 29, 2016. (photo by Shelly Kittleson)

Sgt. Rebwar Husain told Al-Monitor that three Grad rockets had been launched from the position that morning. The first target was the village of Zarakhatun, some four miles away. The rocketing was to create confusion so the peshmerga could move in.

Back at the base, an officer with blood on his sand-colored lace-up boots told Al-Monitor that the first officer to die since the fighting began that morning had been Lt. Gen. Rezgar, on the road into Mufti village.

“He wasn’t just a simple peshmerga,” Maj. Gen. Muhsin Rashed said, somewhat shaken. “He was a medical doctor, like me. He studied medicine in the Czech Republic when he was a refugee, but he came back later to fight as a peshmerga. I was 100 meters behind, and I tried to resuscitate him but I couldn’t.”

“We are astonished by the amount of materiel IS has. We are wondering where they got all this from,” said another officer in the room. He also remarked that the losses from the operation had thus far been much less than previous ones, due to international coalition airstrikes and the experience and training the peshmerga have gained in recent months.

Sources said that a US adviser had suffered minor injuries in the operation, but Al-Monitor could not independently verify the information. The US military did, however, publicly disclose on May 31 that a soldier had been injured in northern Iraq near Erbil without specifying the exact location or circumstances.

Several high-ranking officers fielded telephone calls and received updates, occasionally glancing at a television tuned to Kurdistan 24. The operation was declared completed on May 30, with a reported nine villages retaken and 140 enemy combatants killed. Four peshmerga died, and 34 others were wounded. On May 31, IS tried to retake territory in the early morning hours, in a 3 a.m. attack, but was unable to do so.

The second stage of the peshmerga’s drive toward Mosul, officials told Al-Monitor, will be a push toward Christian villages en route to the city that IS calls its capital in Iraq.

Farther south, Iraqi government troops backed by Shiite militias and international airstrikes had begun an offensive to retake Fallujah, Iraq’s fourth-largest city, overrun by IS six months before it took Mosul. The operations in Iraq are occurring at the same time as a push across the border in Syria by a US-backed, Kurdish-dominated coalition to retake Raqqa, considered IS’ de facto capital.