Though attributed to the PJAK, the recent deadly border clash along Iran’s border with Turkey involved the PKK and is unlikely to escalate. 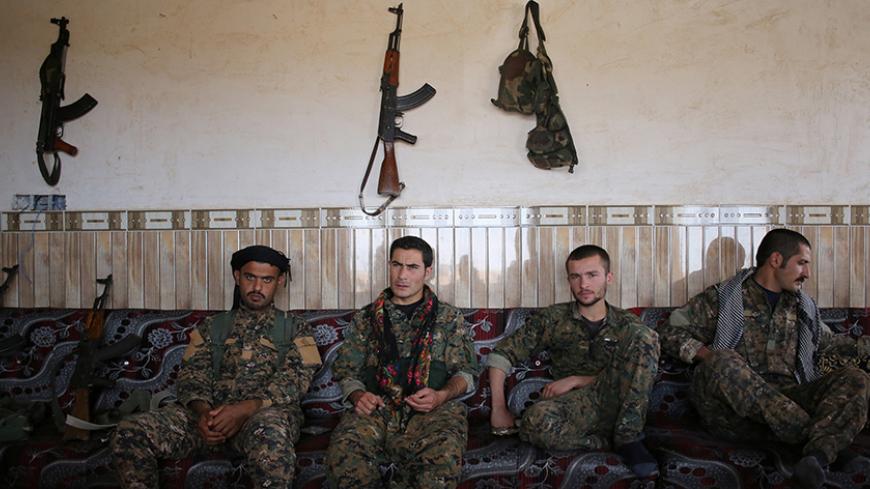 Members of the Sinjar Resistance Units, a militia affiliated with the Kurdistan Workers Party, sit with an Arab tribal fighter (L) in a house in the village of Umm al-Dhiban, Iraq, April 30, 2016. - REUTERS/Goran Tomasevic

The May 27 clash near the Iran-Turkey border between Iranian border guards and what the Iranian media described as a "terrorist group" has raised fears that yet another dimension will be added to the conflict-ridden Middle East.

While some Iranian media identified the group as the Party for a Free Life in Kurdistan (PJAK), a group affiliated with the Kurdistan Workers Party (PKK), Al-Monitor has learned from several sources close to the PKK and PJAK that the incident did not involve PJAK fighters but rather that PKK guerrillas — the archenemy of Turkey — were unwittingly embroiled in the incident.

On May 23, a group of PKK militants were on patrol near the Turkish-Iranian border and just inside Iran, near the northwestern city of Urmia, when they came under attack from an Iranian border outpost. Three PKK guerrillas from Van in Turkey were killed in the clash. A few days later, on May 27, the PKK retaliated by targeting a convoy of Iranian border guard vehicles, killing two guards and seriously wounding three more soldiers, sources close to the PJAK and the PKK said. The soldiers were not part of Iran's powerful Islamic Revolutionary Guard Corps but rather were from the border guards unit of the regular army. The commander of Iran's border guards, Brig. Gen. Qassem Rezayee, blamed Turkey for the incident. Moreover, Iran Foreign Ministry spokesperson Bahram Qassemi said in relation to the incident in a press conference, "It was a bitter incident and we have informed Turkey about this issue through diplomatic channels. … We hope to receive a satisfactory response from Turkey, and based on this response we will take appropriate measures."

Several Kurdish opposition groups, including the PJAK, have been active for years in the border areas near Iraq and Turkey, and almost all have clashed with Iranian security forces. However, the last time Iran and the PJAK became embroiled in a serious war was years ago, in the summer of 2011. Both sides suffered heavy casualties, but in September that year — after a bloody two-month war — Tehran and the PJAK reached a tacit agreement reportedly with the help of one of the ruling parties in Iraqi Kurdistan, the Patriotic Union of Kurdistan (PUK), a long-term strategic ally of Iran.

Since then, despite a number of sporadic clashes, both parties have refrained from launching an all-out war against each other. Instead, both the PKK, the patron of the PJAK, and Iran have concentrated their efforts in Syria and Iraq, battling the jihadi groups that have caused havoc in both countries. As Syrian President Bashar Assad’s rule came under serious threat from a cluster of jihadis and anti-regime groups in late 2011, Tehran sent its powerful and shadowy Quds Force commander Qasem Soleimani to Syria, Iran’s long-term ally, to shore up the Baathist government’s defenses. Around the same time, the PKK was also busy setting up its own proxy force and administration in the Kurdish areas in northern Syria.

PKK fighters have also battled alongside peshmerga forces in Iraqi Kurdistan, such as when the autonomous region came under attack from Islamic State (IS) militants in the summer of 2014. Since then, both parties — while technically at war with each other — have refrained from any serious fighting with the exception of occasional minor clashes. The last bloody clash was Oct. 4, 2016, in the province of Kermanshah, in which 12 PJAK fighters lost their lives. PJAK then retaliated on Oct. 12 by killing three Revolutionary Guard members and wounding seven others.

"Both the PKK and Iran have a lot on their plates right now both in Iraq and Syria, and they can't afford to open another front," an Iraqi Kurdish source close to those in Iran who devise Kurdish policy told Al-Monitor. "The only ally the PKK has in Iraqi Kurdistan is the PUK, which is a strategic ally of Iran — which means the PKK can't afford to lose another ally in the region."

Al-Monitor has spoken to three individuals close to the PKK and the PJAK, and all have stated that the PKK and the PJAK have no plans to resume fighting with Tehran. "This clash is nothing more than any other sporadic clashes that occurred between PJAK and Iranian forces since 2011," one source with intimate knowledge of PJAK activities said. "The PKK is focusing on Turkey and Rojava and the clashes with the jihadists there," referring to northern Syria, which Kurds call Rojava — translated as western Kurdistan in the Kurdish lexicon. "I don't think there will be a resumption of war between PJAK and the Iranians," another source close to the PKK said. The PKK is also involved in a bitter war of words in the Sinjar area near Mosul with the Kurdistan Democratic Party, which has a strong alliance with Turkey. Ankara has threatened to invade Sinjar to force out the PKK from the area, which is close to northern Syria where another PKK-affiliated group — the People's Protection Units (YPG) — is bracing to act as Washington's muscle in annihilating IS in Raqqa.

While the PKK and Iran are fighting their regional wars, their regional alliances mean the possibility of a serious clash between the two parties is likely to be slim. The PUK, which brokered the deal between the PKK-affiliated group PJAK and Iran in September 2011, is a strategic ally of both parties, and neither can afford to upset such an important relation in these difficult times. Since mid-2013, the Counter Terrorism Group of the PUK, trained and partly funded by Washington, has acted as the lifeline for the YPG, providing arms and brokering an important alliance between Washington and the YPG. The YPG, which is the main component of the Syrian Democratic Forces (SDF), has acted as the main US ally to uproot IS from northern Syria since September 2014 when Washington helped the Syrian Kurds defeat IS in Kobani. The SDF — to the displeasure of Turkey — has become the most trusted ally of Washington in its fighting against the jihadis in Syria and in particular against IS.

Since 2015, when a two-year cease-fire between Turkey and the PKK collapsed, the militants of the PKK have waged a bloody war against Ankara, enraging President Recep Tayyip Erdogan as he sees the PKK and the YPG as two sides of the same coin. This means Turkey could not have provided support to the PKK guerrillas in launching the attack against the Iranian border guards. To the contrary, Iran and Turkey have a mutual interest in preventing the PKK and other groups from operating in their areas given their sizable Kurdish population at a time when Iraqi Kurds are calling for independence and the Syrian Kurds are in the process of establishing their own viable autonomous region.

Iran is currently holding over 100 activists sympathetic to the PJAK/PKK cause, according to a source close to the PJAK who spent over two years in an Iranian prison for his sympathies with the group.

While Iran and the PKK oppose each other on ideological grounds, the chances that the May 27 incident will lead to more widespread clashes are minimal. Both parties are mired in the conflicts in Iraq and Syria and have neither the resources nor the will to resume a bloody battle.