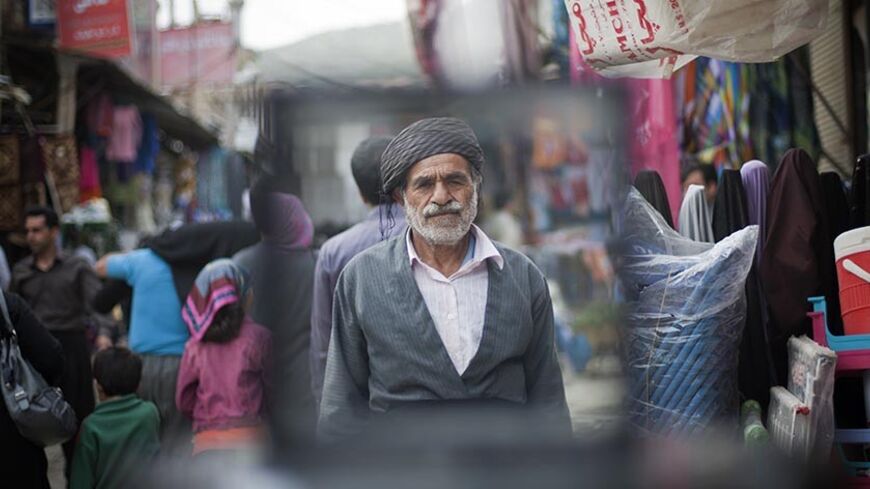 An Iranian Kurd walks at a bazaar while shopping in Marivan, Kurdistan province, Iran, May 12, 2011. - REUTERS/Morteza Nikoubazl

Despite a recent wave of executions, mass arrests of Kurdish activists and the banning of newspapers, Kurdish parties in Iran prefer dialogue over taking up arms against the Iranian government. While Syrian Kurds are taking steps toward more Kurdish autonomy, in Iran, Kurdish parties are slowly losing support in exile.

The Kurds make up an estimated 15-17% of the population in Iran and suffer from human rights abuses.

Although the Kurdish nationalist parties called for a boycott of the Iran elections in June, President Hassan Rouhani received 71% of the votes in Kurdistan as a result of the weakness of the Kurdish parties.

“People do not follow the parties, they have no connection to them. In the past, the parties had a lot of people, but when they were exiled to London, Sweden and Hawler [Erbil], they lost much of their representation in Iran. They gave up their military activities,” said a Kurd from the town of Mariwan, who wished to remain anonymous for security reasons.

The Kurdish parties in Iran are weak as a result of internal disunity, political repression and the dependence of Iranian Kurds on government jobs. Many Kurds have left Iran for job opportunities elsewhere.

According to the International Campaign for Human Rights in Iran, since Rouhani took office in August, Iran has executed more than 200 people, especially drug traffickers and Kurdish activists.

This led to demonstrations and small-scale clashes between Kurdish rebels and the Iranian government. But the situation calmed again after many were arrested.

“The recent wave of executions of Kurdish political prisoners proved what our party and other Kurdish organizations had said the whole time, namely that the new tone of the new president in Iran will not change the violent persecution of Kurdish activists,” Loghman H. Ahmedi, head of foreign relations for the Democratic Party of Iranian Kurdistan, told Al-Monitor.

The Iranian Kurdish parties lost their own opportunity for more autonomy in Iran after they failed to gain influence following the Islamic revolution in 1979.

The main Kurdish parties in Iran, the Kurdish Democratic Party of Iran (KDPI) and the Marxist group Komala, fragmented into several factions after losing the war against the Iranian Revolutionary Guards in the 1990s, moving into exile in the Kurdistan Region of Iraq.

According to the BBC Persian journalist Jiyar Gol, the Kurdistan Regional Government (KRG) allows these Kurdish parties to stay if they do not attack Iran.

Ammar Goli, a Kurdish journalist based in Iraqi Kurdistan, says the Kurdish parties made an agreement with the Patriotic Union of Kurdistan (PUK) in 1996 to maintain bases and camps inside Iraqi Kurdistan: “If they fight against the Iranian government, they do not get economic support from the PUK.”

As a result, their activities are limited.

This is also because of Iran’s political influence in Kurdistan. While Turkey is making business and oil deals with the KRG, Iran employs many intelligence agents in the KRG and even influences political party leadership and government formation in Iraqi Kurdistan during political crises in Kurdistan. For instance, on Jan. 12, a high-level KRG delegation from KRG’s two ruling parties, the PUK and the Kurdistan Democratic Party (KDP), visited Iran to negotiate over the formation of the Kurdish government, which has been in deadlock as a result of the weakening of the PUK and the rise of the Kurdish opposition party Change (Gorran).

As a result, the only Kurdish party that managed to grow and is not dependent on the KRG is the Party of Free Life of Kurdistan (PJAK), based in the Kandil Mountains in the border areas between Iran, Iraq and Turkey, where the KRG has no control.

The PJAK, affiliated with the Kurdistan Workers Party (PKK), managed to attract many young Kurds even outside of the traditional support base of Kurdish parties in the Sunni Muslim Kurdish areas of Iran, among Shiite Kurds who share religious affiliation with the Iranian government.

But in 2011, the PJAK decided to sign a cease-fire with Iran after major clashes between its fighters and the Iranian government. The PKK decided to focus on Syria, where there were more opportunities than fighting Iran, which could result in a Turkish-Iranian alliance against the PKK despite their differences over Syria.

“The PJAK knows that with limited arms they are unable to have any major accomplishment; therefore they do not cause problems, apart from [executed] prisoners in Iran,” said Golli.

During the PKK’s congress last summer, it decided to work “for the maintenance of the present cease-fire between the PJAK and the Iranian state in Rojhelat [Iranian Kurdistan],” while doing everything to achieve Kurdish autonomy in Syria.

Some Iranian Kurds worry that Iran’s executions could lead to new battles without achieving more rights for Kurds.

“They don’t want to start a war again; a lot of Kurdish people do not support the PJAK fighting [Iran]. They know the idea is not good [fearing repression],” said an anonymous Kurd from the city of Mariwan.

This is very different from Syria, where there is a lot of support for the fight of the Kurdish rebels of the People’s Protection Units (YPG) against Islamists in northern Syria.

Evindar Renas, a senior PJAK member, told the Kurdish news agency ANF that it would uphold the cease-fire and stick to the “strategy of self-defense,” not an active war against the Iranian government: “These actions of Iran would alter the cease-fire agreement, but we still want to act sensitively and carefully."

Ziryan Rojhelati, an Iranian Kurdish journalist based in KRG territory, says that the PJAK’s decision to uphold its cease-fire is related to its PKK affiliation.

“The PKK is maybe going to fight again in Turkey, so it does not want to destroy its relations with Iran,” he told Al-Monitor.

Germany-based PJAK leader Haji Ahmedi told the Belgian webzine Uitpers that the PJAK wants to have a peace process in Iran, similar to the one in Turkey.

“We do not want to wage a war, we want to fight a political struggle. It’s not our goal to completely eradicate the Iranian army, we fight for peace. We insist that we solve the Kurdish question in Iran through dialogue.”