The Kurdistan Workers Party has announced a withdrawal from Turkey, a move that could isolate Iran and end a cease-fire between it and the PKK’s Iranian offshoot, reports Wladimir van Wilgenburg. 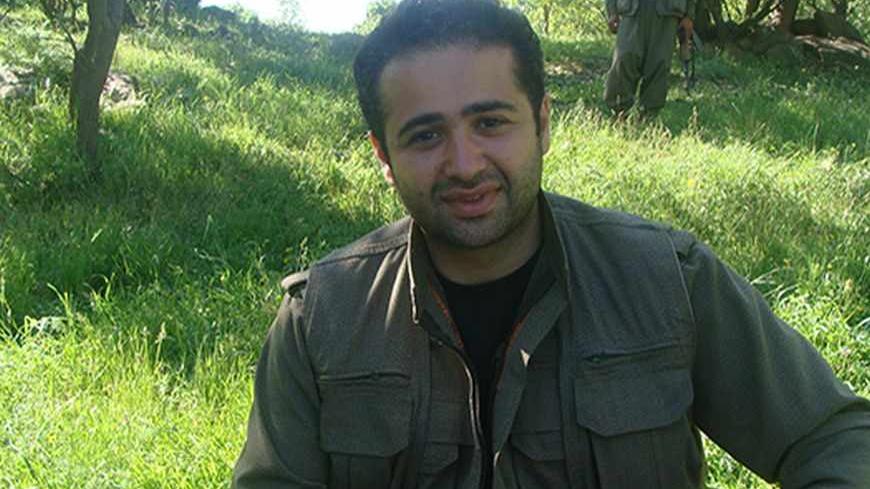 Shamal Bishir, head of foreign relations of the Party of Free Life of Kurdistan, is pictured in the Kandil Mountains April 25, 2013. - Wladimir van Wilgenburg

On April 25, rebels of the Kurdistan Workers Party (PKK) announced during a media conference in the Kandil Mountains of northern Iraq that they would start to withdraw from Turkey on May 8. There are indications that this process could isolate Iran and possibly end a cease-fire between the PKK’s Iranian offshoot and Iranian forces.

While the media conference was being held, the Iranian Revolutionary Guard was holding a two-day drill called "Toward Jerusalem" in the province of West Azerbaijan (April 25-26). Two weeks before, there was a clash in the same province between Kurdish rebels and the Iranian Revolutionary Guard in city of Maku, near the Turkish border. The Kurdish news agency Firat claimed that more than 176 Kurds were arrested in large campaigns.

According to Kurdish websites, seven members of the Iranian Revolutionary Guard were killed, but this cannot be confirmed by independent sources. It is a sign that the September 2011 cease-fire between Kurdish rebels and Iran is under pressure, although Murat Karayilan, acting commander of the PKK, told the Kurdish TV channel Newroz that a cease-fire in Iran should continue, in an attempt to ease Iranian suspicions.

It is clear that Iran could spoil the peace process. Duran Kalkan, a member of the executive council of the Union of Communities of Kurdistan, an umbrella organization which includes the PKK, told the Turkish newspaper Vatan that there are many indications that Iran is trying to “oppose the process strategically and to sabotage it," adding, "We have to take precautions against this.”

The Turkish daily Milliyet quoted an Iranian diplomat as saying that Iran would not allow PKK insurgents of Iranian origin to return to their country. Moreover, Milliyet reported that Iran offered the PKK military aid for not withdrawing, although the Iranian Embassy in Ankara denied the claim.

The Syrian crisis in 2011 ended the counter-terrorism cooperation between Iran, Syria and Turkey against the PKK and isolated Turkey in its fight against the PKK, with the PKK-affiliated Democratic Union Party taking over control of large chunks of northern Syria as a result of the Syrian revolution. But the new cease-fire process could change this power balance to the advantage of both Turkey and the PKK.

Shamal Bishir, a soft-spoken insurgent and head of foreign relations of the Party of Free Life of Kurdistan (PJAK), spoke to Al-Monitor on the sidelines of the PKK media conference in Kandil. He said that Iran has not yet made any official statements, but the military authorities are not satisfied with this process, and he fears that will lead to more clashes.

“The Iranian government knows that this process in Turkey is based on the situation the Kurds have reached in Syria, and at the same time, this process in Turkey will have an impact on relations between Kurds and Turks in Syria and the future stance of the Kurds in Syria. Iran knows that the stance against the Assad regime will lead to the recognition of the Kurdish question by Syria, and this will open ways to the fall of the Assad regime, the most important ally of the Iranian government in the region.”

According to Bishir, the process will also lead to a legalization of the Kurdish political arm of the PKK, which is blacklisted as a terrorist organization internationally, and that it could lead the PKK and its affiliates to develop relations with the international community.

The Kurdish spokesman thinks the process could also influence relations between the Turkish-speaking minority of Azeris in Iran and the Kurds, saying, “If there is Kurdish and Turkish brotherhood, there could be brotherhood of Azeris and Kurds.”

Each of them had their own governments between 1945 and 1946, until the Iranian government reasserted control over both Azeri and Kurdish areas in Iran.

The Iranian state media has been critical of the process and emphasizes that Kurds do not trust the Turkish government.

The Iranian semi-official Fars News Agency claimed in January that “Turkish Prime Minister Recep Tayyip Erdogan has started implementing a US and Israeli plan to provoke Iran's Kurdish population against the government in Tehran through the Kurdistan Workers' Party.”

The conservative Iranian newspaper Jomhuri-ye Eslami published a piece by Ali Rezakaram on April 28, suggesting that Turkey wants to make the Kurdistan region of Iraq its new ally in the region and “create tension in the Iranian Kurdish regions through the Iraqi Kurdistan” and “align the Syrian Kurds with itself against [Syria's] government.”

Kamil Meresene, PJAK's foreign-relations officer in Sweden, told Al-Monitor that PJAK believes that this process will affect the Kurds in Iran, Syria, Turkey and Iraq.

But despite this, PJAK still offers Iran an olive branch. Meresene said, “We have suggested a peaceful solution and dialogue to Iran. If Iran continues with the current cease-fire, ends the repression of political prisoners and of the people and shows readiness to solve the Kurdish issue and the issues of other peoples in Iran as well as the issue of democracy, then Iran will democratize and take part in a future new Middle East.”

But, Meresene warned, “If Iran continues with its oppressive policies, then Iran will not be able to withstand the democratic struggle of the Kurdish people.”

Wladimir van Wilgenburg is a political analyst based in the Kurdistan region of Iraq specializing in issues surrounding Kurdish politics. He has written extensively for Jamestown Foundation publications and other journals such as the Near East Quarterly and the World Affairs Journal.