Iraq is protesting the relocation of Kurdistan Workers Party (PKK) fighters from Turkey to Iraq. 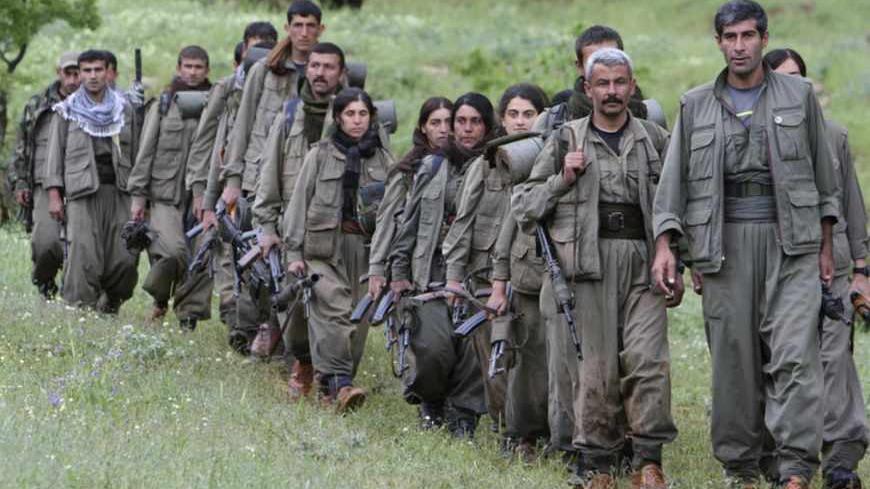 Kurdistan Workers Party (PKK) fighters, withdrawing from Turkey, walk to their new base in northern Iraq, May 14, 2013. - REUTERS/Azad Lashkari

On May 8, the Kurdistan Workers Party (PKK) started its withdrawal from Turkey to the PKK camps based in the mountainous borders areas of the Kurdistan region of Iraq. But although the Iraqi government has limited authority over its border with Turkey, which is controlled by the Kurds, the Iraqi government reacted negatively. This led to speculation that Iran, through Iraq, gave a sign that it is against the process.

The Kurdistan Regional Government (KRG) and the government of Prime Minister Nouri al-Maliki have been at loggerheads over oil deals between Turkey and the KRG. Moreover, Baghdad has accused Turkey of supporting Iraq’s Sunni politicians that oppose Maliki.

On May 9, the Iraqi government expressed its opposition to the withdrawal of PKK fighters into Iraqi territory. Moreover, Iraq suggested it could threaten the stability of neighboring states of Iran and Syria, where the PKK also has affiliates, such as the Party of Free Life of Kurdistan (PJAK) in Iran and the Democratic Union Party (PYD) in Syria.

Reuters reported that Ministry of Foreign Affairs said in a statement on its website that: "The Iraqi government ... does not accept the entry of armed groups into its territory that could be used to impact the security and stability of Iraq or neighboring states."

According to the National Iraq News Agency, the Iraqi Council of Ministers announced that it was submitting a memorandum to the UN Security Council and the Arab League voicing its opposition of the PKK withdrawal.

The PKK reacted by saying they had been based in the area since 1984, and tried to take away fears that the PKK insurgents could threaten neighboring countries of Turkey. PKK spokesperson Ahmed Deniz said, "The peace process is not aimed at anyone and will not proceed at the expense of any other party, so we expect these countries to provide support.”

Earlier, PJAK official Shamal Bishir told Al-Monitor that Iran fears that the peace process could isolate Iran in the future.

Iranian’s government-controlled media have been critical of the PKK peace deal.

Jomhouri-e Eslami newspaper, considered to be close to Iran’s supreme leader Ali Khamenei, published a piece by Ali Rezakam titled “Erdogan and Playing the 'Kurdish Card' Against the Iraqi Government," on April 29.

Rezakam accused the Turkish Prime Minister Erdogan of supporting the creation of an independent Kurdish government in Iraq, trying to benefit from the KRG’s oil and trying the use the PKK card against both Syria and Iran.

According a report the Kurdish newspaper Hawal published on May 11, political observers think that the Iraqi government refusal to shelter the PKK members is due to pressure from Iran.

Iran’s semi-official News Agency Fars reported on May 15 that Iraqi officials call for the expulsion of the group.

Moreover, the same news agency highlighted on May 12 that Baghdad will not allow the PKK to undermine it’s neighbors.

Saeed Jalili, secretary of Iran’s Supreme National Security Council, at a news conference held in Istanbul, said that “we [Iran] support any action that will increase the integrity of Turkey or Iraq.”

But the Turkish media was not convinced.

İbrahim Karagül, a Turkish columnist of the pro-Turkish government newspaper Yeni Safak on May 10, wrote that Maliki fears the PKK and claims that Tehran and Baghdad support Assad

“The separation into hostile camps in Syria emerges in the form of the separation in Iraq as well. The solution process, and Turkey's rapprochement with the Kurds in the general sense, is a serious loss of ground for Iran. Every possible path will be explored in order to thwart this.”

He concluded, “We have seen, via Baghdad, Iran's view of the PKK issue. That is all.”

Shwan Zulal, a Kurdish political analyst base in London told Al-Monitor it could be related.

“The concerns are both related to Iranian concerns and Baghdad and Ankara relationship at the same time is a jibe at the KRG. Baghdad until recently was courting PKK but since the peace process has started, their take on the PKK staying in Qandil has changed.”

Mahmoud Othman, a Kurdish parliamentarian in Iraqi parliament, told Al-Monitor, “There is no doubt that Iran doesn't like that agreement between Ocalan and AKP. This may influence the Iraqi stance.”

Another expert thinks it could be related to Ankara’s relations with Baghdad. “I would say the PKK withdrawal clearly adds to the tense relationship between Baghdad and Erbil, since it comes on top of the KRG energy deals with Turkey,” said Reidar Visser, an expert on Iraq.

“The word 'sovereignty' was prominent in some of the criticism of the PKK settlement in Iraq, and adds to the picture of Turkish-Kurdish challenges to Baghdad's authority, often with considerable implicit support from players in the international community.”

Wladimir van Wilgenburg is a political analyst specializing in issues surrounding on Kurdish politics. He has written extensively for Jamestown Foundation publications and other journals such as the Near East Quarterly and the World Affairs Journal. He writes for the Kurdish newspaper Rudaw. On Twitter @vvanwilgenburg