Iran is not admitting that Islamic Revolutionary Guard Corps units are operating in Syria. 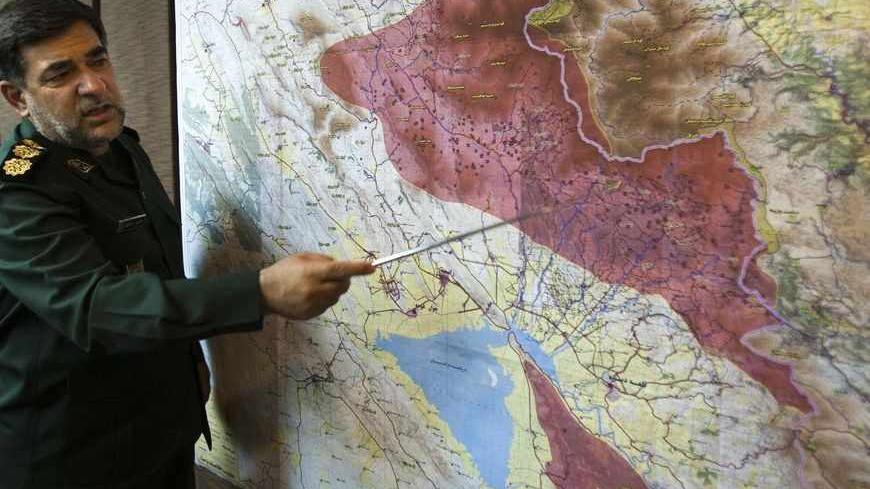 A member of Iran's Revolutionary Guard, Col. Hamid Ahmadi, speaks with journalists about military operations against PJAK (Party for a Free Life in Kurdistan) during a news conference in Tehran, Aug. 17, 2011. - REUTERS/Raheb Homavandi

On June 6, near the northwestern border of Iran, Yusuf Hamzelu, a member of Iran’s Revolutionary Guard Corps (IRGC), was killed by the Kurdistan Workers Party (PKK), Iran’s Mehr News Agency reported. He was buried in Zandan on June 10.

However, the Party for a Free Life in Kurdistan (PJAK), PKK’s Iranian branch, denied the news report in a media release and actually accused Iran of hiding the fact that the Iranian soldier was killed by the Free Syrian Army (FSA) in Syria.

There have been claims before that Iran is actively assisting Syria’s embattled president Bashar al-Assad. The Lebanese Hezbollah, which is backed by Iran, has also been actively supporting Assad’s operations against Syrian rebels, which led to Assad retaking Qusair near the Lebanese border.

PJAK foreign affairs official Shamal Bishir told Al-Monitor that PJAK hasn't fought with the Iranian army since May 19. There were previous clashes in Iran’s Maku and Sardast regions near the border.

On May 19, Revolutionary Guard members Mohammed Shamsi and Kamal Shamsi were killed in a clash with PJAK in the region of Jandaran in Vazineh district in Sardast province.

Moreover, there were two clashes between the PJAK and the IRGC in mid-April near Kurdish-inhabited areas along the border with Turkey.

The Kurdish fighters of PJAK worry that Iran might bury more Revolutionary Guard members killed in Syria but claim they were killed in clashes with the PJAK in Iran.

“We don’t know how many others have been killed and had it said they died in clashes with PJAK. We want the public in Iran to know that there were no clashes between us. The soldier was killed in Syria in clashes with the FSA, not with the PJAK,” Bishir told Al-Monitor.

Iran and Iraq have expressed objections to the withdrawal of PKK insurgents from Turkey to the Kandil Mountains controlled by the PKK in Iraq as a result of a deal between the PKK and the Turkish government and peace negotiations that are still ongoing.

However, despite this deal between the PKK and Turkey, PJAK and the PKK want to uphold the cease-fire the PJAK and Iran reached in September 2011. “It is very important for us to keep the cease-fire between Iran and us, because ending the cease-fire is not in the interest of peace negotiations in Turkey,” Bishir said.

Also, PKK commander Murat Karayilan dismissed these claims in an interview with T24’s Hasan Cemal. “More or less 2,000 guerrillas are being withdrawn. Now, Baghdad says that the PKK will send these forces to Kirkuk. That some of them will be sent to Syria, some to Iran — to join PJAK they say. We certainly do not have any such intentions.”

The peace process between the PKK and Turkey is still fragile as a result of recent demonstrations against the Turkish government that could weaken the government’s resolve to continue the process.

Moreover, many experts are pessimistic about the peace process due to the “incompatibility of PKK demands and what Turkey has to offer,” said Zeynep Kaya, a Ph.D. candidate in international relations at the London School of Economics, during a LSE conference on Turkey’s Kurdish opening.

Iran’s ambassador to Turkey, Ali Riza Bigdeli, told the Turkish paper Milliyet that Iran does not oppose this process. “We believe that every step taken by Turkey to maintain stability is in Iran's best interests as well. We are not going to allow the countries outside this region to abuse this process.”

However, Bishir doesn’t believe these words. “I believe nobody in the world can say they are against the peace process and democracy,” he said. “What is important is what happens in real life, on the ground.”

He concluded, “Iran knows clearly that the process will isolate the government more in the region and they consider the whole peace process as a threat against Iran’s security and Iran’s national interest. They try in different ways to break up the cease-fire agreement.”

According to Bishir, Iran has put more pressure on the Kurdish political parties in Iraqi Kurdistan in relation to Syria and Turkey, and moreover launched a new wave of military operations in the border areas.

“This is something that didn’t exist two, three months ago. The whole Kurdish area close to the border is completely militarized,” he said.

The International Campaign for Human Rights in Iran confirmed Bishir’s claims and in an article said that more IRGC forces have been stationed in the Kurdish border regions of western Iran after the May 19 clashes.

“According to the local source, over the past few weeks, these IRGC forces have been set up in the border areas of Marivan, Hooramanat, Sardasht, Piranshahr and Maku. Along with local IRGC forces, they patrol the mountainous and border areas,” the human rights organization said.

The recent tensions between the PJAK and the Iranian government show that there could be more clashes in the future.

This will also depend on the success of the Turkish government in negotiations with the PKK.

However, the peace process shows that the talks do not just affect Turkey, but rather all its neighbors.

Iranian commentator Siamak Bahrami, writing in E'temad on May 29, said the process can have different results.

"There are many outcomes possible for the future of Kurds; if the crisis of Turkish Kurds is solved within a comprehensive framework, it can become an example for other countries with a Kurdish population,” he wrote.

However, it seems that Iran doesn’t see it as a future model, but rather as a threat to its own security. Despite this, the Iranian ambassador to Ankara told Milliyet that Iran hopes it  can still achieve peace.

“Who says we cannot find common ground in which the various ethnic groups within our lands can all live together in peace? With God's permission, if we all work together, everybody will be able to live in peace within their own borders and within the framework of their own cultural elements,” Bigdeli said.

Wladimir van Wilgenburg is a political analyst specializing in issues related to Kurdish politics. He has written extensively for Jamestown Foundation publications and other journals, such as the Near East Quarterly and the World Affairs Journal. He currently writes for the Kurdish newspaper Rudaw. On Twitter: @vvanwilgenburg