How regional politics is restraining Kurdish militancy in Iran

While some Iranian Kurdish armed opposition groups are intent on raising the heat on Iran amid ongoing US pressure, other groups are careful not to enter a conflict that may spiral out of control. 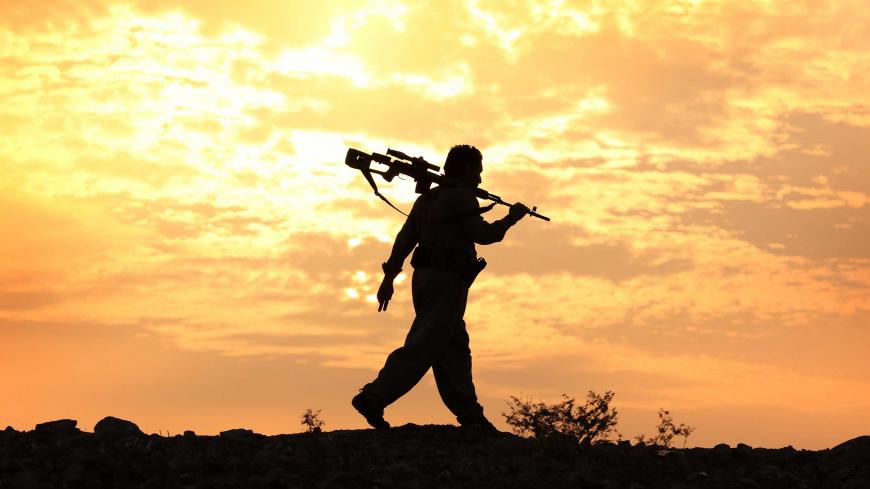 An Iranian Kurdish peshmerga and member of the Kurdistan Democratic Party of Iran takes part in a routine military exercise in Koya, 100 kilometers (62 miles) east of Erbil, the capital of the autonomous Kurdish region of northern Iraq, Oct. 22, 2017. - SAFIN HAMED/AFP/Getty Images

As Qasem Soleimani bashed the United States for its past and present policies toward Iran at a speech in the western Iranian city of Hamadan on July 26, surrounded by posters of commanders who have died under his command, one woman sat quietly, holding in her hands a framed picture of a young man, listening eagerly to the commander of the powerful Quds Force.

“You [the United States] are threatening us? … You are betting on counter-revolutionaries,” Soleimani roared, taking a swipe at Kurdish militants in his 87-minute speech. “You are making a big mistake. … You know our power in asymmetrical warfare.”

The picture in the woman’s hand was of Mohammad Ghafari, a former dentistry student who lost his life in pursuit of Soleimani’s asymmetrical warfare. The fallen soldier was a member of the Saberin, a special forces unit of the Islamic Revolutionary Guard Corps (IRGC) that was created in 2000 specifically to be used in counter-guerrilla warfare.

In their first major battle, the Saberin faced the fighters of the Kurdistan Free Life Party (PJAK), an armed group based in the border area between Iran and Iraq. Baran Beritan, once a management student at Urmia University in northwestern Iran, was a PJAK fighter in the summer of 2011, when the Saberin and other IRGC units attacked the group on the peaks of the Qandil Mountains. Ghafari and his fellow soldiers were easy targets for Beritan and other PJAK fighters, who were both experts in guerrilla warfare and familiar with the terrain. Indeed, many Iranian Kurds had been fighting in the ranks of the Kurdistan Workers Party (PKK) against the Turkish army and its counter-guerrilla force since the late 1990s, before they set up PJAK in 2004, specifically for Iranian Kurdistan, referred to as Rojhelat in Kurdish.

In the early hours of Sept. 4, 2011, Ghafari and a dozen other Iranian soldiers were killed by PJAK fighters in battle. Iran conceded afterward that many IRGC members — including members of the Saberin Unit — were killed in fighting that lasted through the summer, though officials did not specify the exact number. PJAK said it lost 23 fighters and that the Iranian side lost hundreds of troops. The fighting finally came to an end with the efforts of officials from the Patriotic Union of Kurdistan, which got the two parties to declare a cease-fire and refrain from attacking each other, according to Beritan, who offered this account to Al-Monitor without mentioning the Patriotic Union of Kurdistan by name. Iran rebuts claims that it signed a cease-fire with PJAK.

Beritan, 36, is now a member of PJAK’s 12-member Executive Council. His colleagues are facing a tough choice as the United States ratchets up pressure on Iran. Other Kurdish armed opposition parties, including the Kurdistan Democratic Party of Iran, have expressed a readiness to aid the Donald Trump administration in its attempt to confront the Islamic Republic. But representatives from PJAK, which has a formidable guerrilla force, say they are not sure if a military attack on Iran is a good idea. The group is a member of the Kurdistan Communities Union (KCK), an umbrella organization that brings together all parties influenced by jailed PKK leader Abdullah Ocalan’s ideology. The latter includes the Democratic Union Party in Syria and the Freedom Movement (Tevgara Azadi) in Iraq.

“Many say that the Iranian regime should be toppled," Sarhad Varto, KCK spokesman for foreign relations, told Al-Monitor in Sulaimaniyah, where he was attending a conference about the future of Kurds in the Middle East on July 28. "But look at Syria. After seven years of fighting, now all sides are coming round to negotiate with [President Bashar al-Assad].”

He continued, “But Iran can’t continue like this given the societal and external pressures. It needs to democratize, and that is what the Kurds want.” Other Iranian Kurdish armed groups, such as the Kurdistan Democratic Party of Iran, see PJAK as a front for the PKK, but Beritan said his outfit is independent from the PKK, though it sees the latter as a “strategic partner.” In 2009, the US Treasury designated PJAK as a terrorist organization, saying that the move is geared toward “exposing PJAK’s terrorist ties” to the PKK.

The Iranian Kurdish armed groups based in camps in Iraqi Kurdistan have, with a handful of exceptions, avoided major clashes with Iranian security forces since late July 1996, when Iran deployed hundreds of IRGC personnel with heavy guns to attack the bases of the Kurdistan Democratic Party of Iran near Sulaimaniyah. But over the past three years, there have been renewed tensions and confrontations between Iranian Kurdish armed groups and Iranian authorities. In the case of PJAK, things have been particularly complicated. While there have been intermittent clashes between the group and the IRGC since the fierce fighting of the summer of 2011, the parties have until recently avoided serious bloodshed. The uptick in violence in recent weeks appears to have begun after the IRGC on July 11 and 14 ambushed two PJAK units near the Iranian border towns of Marivan and Paveh, leaving four fighters dead.

PJAK quickly accused local Kurdish collaborators of spying on their units on behalf of the IRGC. The day after the second ambush, on July 15, one alleged collaborator was killed by unknown gunmen in his home in a village near Marivan. Iranian media blamed the ambush on PJAK. The group has not claimed responsibility for the killing. Two days later, on July 17, unknown gunmen shot and killed a Kurdish activist close to PJAK in the city of Penjwin in Iraqi Kurdistan, across the border from Marivan. PJAK blamed Iran for the attack, with one of the group’s officials vowing revenge for both the activist and the four fighters killed in preceding days. On July 21, a large PJAK force sneaked up on an IRGC outpost in the mountains near Marivan, killing at least 11 security personnel, wounding eight and blowing up a major arms cache. Some reports on social media claim that all of the Iranian fatalities were Sunni Kurds, in a display of the fraught complexities of the conflict.

The Islamic Republic has promised to retaliate and go after armed groups based in Iraqi Kurdistan. But, despite the saber-rattling, both parties appear to not want to escalate the dispute further. Given that KCK operates in Turkey, Syria, Iraq and Iran, its leaders have to consider the bigger picture when devising policy. KCK members are currently fighting in Turkey, Syria and the mountains of Iraqi Kurdistan — and they cannot afford to open another active front with Iran at a time when the Democratic Union Party is trying to negotiate with the Assad regime, a strong ally of Iran.

There is another dimension to consider: The clashes between PJAK and the IRGC coincided with increasingly tough rhetoric from Washington after the US withdrawal from the nuclear deal. “We have not had any contacts with the Americans,” Beritan told Al-Monitor. “But our diplomatic channels are open. We don’t think a military intervention is the right course of action, but we also realize that unless there is fundamental change in Iran, the problems of the Middle East won’t be solved.”

“We have units inside Iran from [the northwestern town of] Maku to Kermanshah province, but we avoid clashing with the IRGC,” said Beritan, who joined PJAK in 2008, after finishing his university degree. “However, we reserve the right to defend ourselves, meaning that if we come under attack, we will respond.” He believes that Iranian opposition groups have no plans for the day after the toppling of the Islamic Republic and that this is partly why PJAK does not support armed confrontation, as it could unleash ethnic and sectarian tensions like in Iraq and Syria. “Making war is easy but concluding it is difficult,” he said.