Turkey's defense minister hosted his Russian counterpart for a preparatory meeting for next week's summit on Syria in a show of the deepening friendship and security ties between the Black Sea powers. 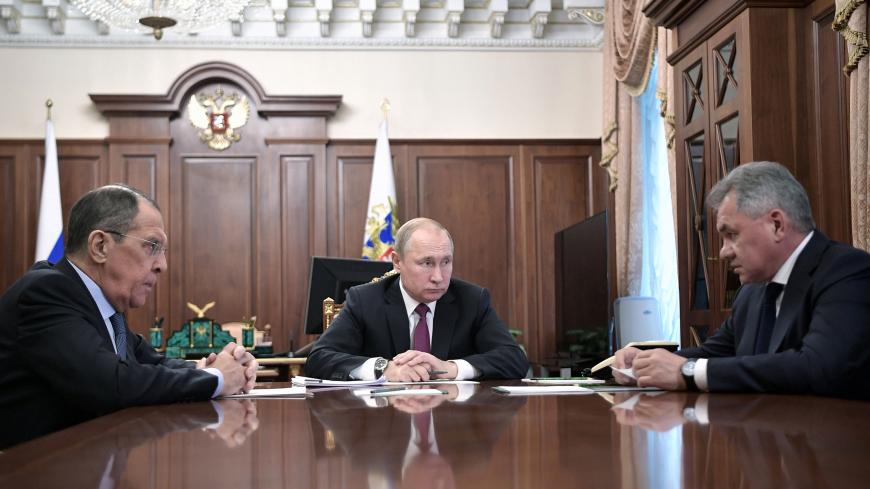 Russia’s Defense Minister Sergei Shoigu met with his Turkish counterpart Hulusi Akar in Ankara today ahead of a trilateral summit on Syria in Russia’s Sochi between the presidents of Turkey, Russia and Iran due to be held Feb. 14.

Akar and Shoigu reportedly discussed the latest developments in Syria, notably in the rebel-held province of Idlib, where al-Qaeda-linked Hayat Tahrir al-Sham (HTS) militants are consolidating their hold after driving out rival Sunni Arab rebel groups, including ones backed by Turkey. Akar initiated the meeting, according to the pro-government Turkish daily Sabah.

In a joint statement put out after their meeting, the ministers said “decisive measures” need to be taken to “stabilize the situation in Idlib province,” and “despite provocations,” to continue “partnerships between our two countries.”

The statement also referred to Turkey's “security concerns” stemming from the Islamic State as well as the Syrian Kurdish People’s Protection Units (YPG) and its political arm the Democratic Union Party (PYD) and the need to address them “within the framework of a common understanding.” Both Kurdish groups are considered terrorist outfits by Ankara though not by Moscow.

In a show of the deepening friendship between the Black Sea powers, the ministers made appropriately positive noises ahead of their powwow. Akar said, “We have various contacts with Russia at all levels to secure the interests and rights of our countries and to assure peace and stability and the cease-fire in the region.” Shoigu said the sides had already agreed on “key issues” including on Idlib and the Kurdish-controlled northeast of Syria that is currently under US protection.

The ministerial assignation follows calls from Moscow for Turkey to carry out its pledges to fulfill the terms of an agreement struck in September whereby the Syrian government forces would refrain from any full-scale operation to retake the province, allowing Turkey time to persuade HTS to cede control without a fight. But Turkey has failed to achieve that goal so far and according to Russian Foreign Minister Sergey Lavrov, “terrorist groups” are operating in about 70% of the demilitarized zone where Turkish military observers stand between the regime and the rebels.

Speaking at a news conference Feb. 7, Russian Foreign Ministry spokesperson Maria Zakharova piled on the pressure, saying, “We expect our Turkish partners to activate their efforts to ultimately turn the tide and to fully carry out the obligations they took upon themselves.”

Despite Russian rhetoric and sporadic shelling and air attacks by Syrian regime forces, analysts air skepticism that any large-scale government offensive on Idlib is imminent.

“We don’t see any massing of government forces of a kind that would suggest a major operation is at hand,” a senior Western official told Al-Monitor on condition of strict anonymity. “One cannot start an offensive without lots of preparation. Idlib is a huge area with more than three million people.”

Although the regime itself is in a hurry to regain control over the province, which remains one of the biggest thorns in its side, Haid Haid, a research fellow at the London-based think tank Chatham House, told Al-Monitor, “There is no green light for this from Russia and without it there cannot be an offensive.” The lack of Russian approval is principally because Moscow does not want to upset relations with Turkey on a number of counts. Haid observed, “When it comes to Syria, Russia does not need Turkey for what it is seeking to achieve specifically, which is to help the regime reassert full control.” But its courtship with Turkey “allows Russia to pull Ankara further away from the United States and NATO while building a coalition in the region with other regional actors.”

Haid reckons that the other reason Moscow is willing to hold back is that it's waiting to see what the United States will do in northeastern Syria. Pressure from the European Union, which is terrified at the prospect of a fresh flood of Syrian refugees potentially pressing against its borders from Turkey, is another, if lesser factor, Haid said.

President Donald Trump said he would withdraw US troops from the Kurdish-controlled zone in January and they are expected to be out by early May. Staving off a regime offensive on Idlib might be leveraged to encourage Turkey to favor a gradual return of regime forces to the northeast in lieu of other proposals being floated by Trump’s Syria team. In January, Russian President Vladimir Putin evoked the 1998 Adana accord between Turkey and Syria that committed Damascus to insulate Turkey from any attacks from Kurdish militants operating on its side of the border after his meeting with Turkey’s President Recep Tayyip Erdogan. The message was that Turkey could rely on Damascus to rein in its Kurdish foes.

But who will rein in HTS? The senior Western official said, “I think HTS is now out of the control of even Ankara,” hence Turkey will not mind if the regime and the Russians eventually mount an attack. And according to Haid, Turkey lacks the means to halt one anyway, and at most can buy time by backing rival militants against HTS, a strategy that’s borne little fruit thus far. In the meantime, Haid said, HTS is seeking to win hearts and minds in Idlib through a series of confidence-building measures described in detail in a recent essay he penned for Chatham House.

These measures include imaginative deals to protect rival militants and their civilian supporters in recently captured territory. The group’s coffers seem to be comfortably full thanks to business conducted through front operations such as the energy company Watad, which imports oil from Turkey via the Bab al-Hawa border crossing.

Ultimately, however, with nobody prepared to engage with HTS as the non-state political actor it aspires to become, its future options remain limited. “There is no way out of their troubles,” Haid said. The ministers' statement gave no further details.