The presidents of Turkey, Iran and Russia held a virtual summit to discuss the latest developments in Syria today. 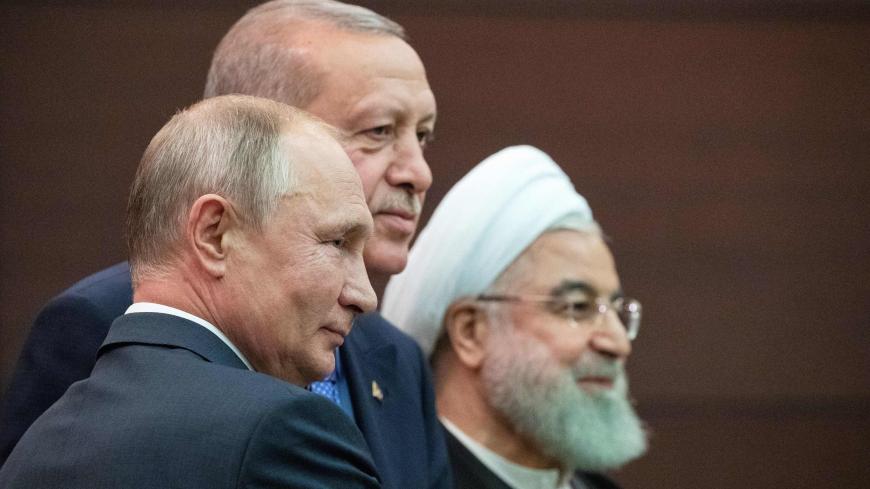 The presidents of Turkey, Iran and Russia held a virtual summit to discuss the latest developments in Syria today.

Why it matters:  It was the three leaders' first such meeting since Turkey butted heads with Russia and Iran in the rebel held-province of Idlib in March. At least 33 Turkish soldiers perished in a February airstrike thought to be carried out by Russian air force jets. Turkey retaliated against Syrian regime forces and Iran-backed Shiite militias, earning plaudits from the United States. But a cease-fire for Idlib struck in Moscow in March between Erdogan and Putin was largely on the latter’s terms.

US President Donald Trump’s envoy for Syria engagement, Ambassador Jim Jeffrey, who cheered Turkey on against the Russians in Idlib, will have been miffed by the joint statement put out by the trio that laid rest to speculation that the Astana process was dead. It contained thinly veiled pot shots at the United States with its reference to the “illegal seizure and transfer of oil revenues that should belong to the Syrian Arab Republic.” Trump said that US forces are staying on in the Kurdish-run northeast to “secure” two major oilfields there that contain most of the country’s oil. In a swipe at the Syrian Kurds, the statement said the leaders “rejected illegal self-rule initiatives.”

The presidents also took aim at US sanctions against Syria, saying they were in “contravention of international law, international humanitarian law and the UN Charter, particularly in the face of the COVID-19 pandemic.” Additionally and most probably to appease Rouhani, reckons Kerim Has, an analyst of Turkish Russian affairs, the statement blasted Israel for its continued airstrikes against Iranian targets in Syria. "I don't believe Russia will prevent Israel's airstrikes," Has told Al-Monitor.

What’s next:  The wording of the statement suggests that Russia is willing to grant Turkey more time to fulfill its Astana mandate, that is to defang jihadi rebels in Idlib and prevent them from attacking Russian military assets.

Ankara appears to have won the support of the most powerful Sunni rebel group on the ground, Hayat Tahrir Sham (HTS), in helping tame more radical factions. But Russia’s ultimate aim is to help the regime win back full control of the province and to drive the United States out of Syria. Allowing Turkey to grab more land in the Kurdish-controlled northeast, notably the mainly Arab town of Qahtaniyah, could be a quid pro quo for letting government forces advance further and win full control of the M4 and M5 highways.

But Ankara is unlikely to agree to the kind of regime offensive that would send millions more Syrian refugees to seek shelter in Turkey. Much horse-trading lies ahead before the next Astana summit, which is meant to take place in Iran though no date has been set.

Know more:  For more on Turkey’s maneuvers in Idlib read Fehim Tastekin’s pieces about how HTS “is doing Turkey’s job” in Idlib and how the Turkish lira is now the main currency in the province.