Erdogan: Turkey on path to ‘unstoppable power’ in region

Turkish president throws his lot in again with Russia and Iran in Syria, expands plans for influence in North Africa and moves to convert the Hagia Sophia back into a mosque. 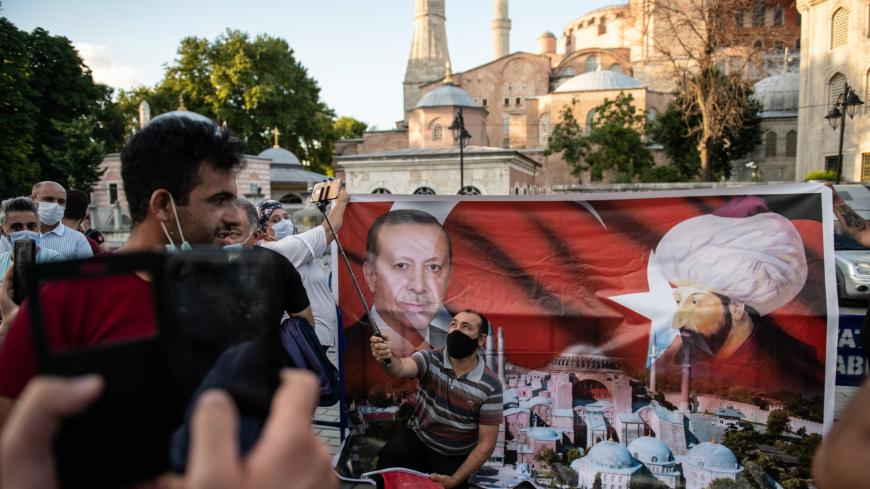 People pose in front of a placard depicting Turkish President Recep Tayyip Erdogan and Ottoman Sultan Mehmet II, also known as Mehmet the Conqueror, outside Istanbul's famous Hagia Sophia on July 10, 2020, in Istanbul. Turkey's top administrative court has annulled a 1934 decree that turned the historic Hagia Sophia into a museum, opening the way for the structure to be converted back into a mosque. - Photo by Burak Kara/Getty Images

Turkish President Recep Tayyip Erdogan has never been one for introspection or restraint in his declarations, but his recent statements display an outsized confidence, even by his standards.

In the next three years, Erdogan said, Turkey will be an unstoppable power in the region. Despite an exodus of foreign investment, as Mustafa Sonmez reports, the Turkish president sees opportunity in crisis: in COVID-19, Syria, Iraq and even in Libya and North Africa, where so far he seems to have gained an edge, for now, on rivals such as France, Egypt and the UAE.

For Erdogan, Turkey will not be set back by COVID-19, but will instead “be one of the outstanding countries in the world that will be reshaped after the pandemic.”

Turkey, like the UAE and Qatar, has its own COVID-19 foreign aid program, sending medical supplies and assistance to Iraq and sub-Saharan African countries, as we reported here.

Last week the so-called "Astana Trio" — the presidents of Turkey, Russia, and Iran — met again to discuss the future of Syria.

Erdogan said the grouping “will be decisive for Syria’s future.” No matter that the three differ on the fate of Syrian President Bashar al-Assad — Russia and Iran back him, while Erdogan has in the past call for Assad’s ouster — and that Turkish and Syrian forces exchanged fire and casualties in Idlib in February.

But Turkey may be inching toward, or at least entertaining, for now, a live and let live approach with the Syrian government, at least to give Russian President Vladimir Putin’s diplomacy a chance.

The final Astana communique was a restatement of the group’s commitment to eliminating terrorists (which Turkey takes to mean armed Kurdish groups as well as the Islamic State and al-Qaeda linked forces), and jabs at US policies of violating Syrian "sovereignty" by backing "separatist agendas" and the "illegal seizure and transfer of oil revenues.”

This was a disappointment to those in the Trump administration who in May had spoken hopefully that Turkey could be a "counterweight" to Russia and Iran in Syria. That perspective was based on the false hope that Erdogan was willing to chuck his Russian and Iranian partners because of the Russian-backed Syrian assault on Turkish outposts in Idlib in February, which killed 33 Turkish soldiers. Turkey retaliated with fury, taking out many more Syrian and Iranian-backed forces, before Erdogan and Putin ironed out a new cease-fire in March, which has mostly held.

The bottom line for Erdogan in Syria is twofold, as he deals with a two-front campaign in Idlib, in the northwest, and in combating US-backed Kurdish groups in the areas it occupies in the northeast.

Idlib is not the hill Erdogan wants Turkey to die on. To the contrary, he wants out, a face-saving exit. It is a mess and a quagmire, as the al-Qaeda-linked Hayat Tahrir al-Sham group faces its Alamo there. As part of its agreements with Russia, Turkey has been trying, for several years, to enlist moderate Hayat Tahrir al-Sham members to join other opposition groups in order to stave or hold off a final Syrian assault. This has been a miserable and thankless task, but it may be making progress, as Fehim Tastekin explains. Putin may be content, for now, that the Russian-backed Syrian offensive has secured the vital M4 highway linking the country's east and west, allowing a pause to give Turkey more time to engage Hayat Tahrir al-Sham.

With regard to Turkey’s "security corridor" in northeast Syria, to mitigate what Erdogan describes as the terrorist threat from the Kurdish People’s Protection Units — which make up the core of the US-backed Syrian Democratic Forces (SDF) and which he links to the Kurdistan Workers Party (PKK) — Erdogan perceives he has gotten what he needs, if not all he wants. The armed Kurdish groups are on defense following the Turkish invasion and occupation in October 2019. The Turkish occupation is costly and perhaps not sustainable in the long run, as are the 3.6 million refugees presently in Turkey, but it gives him leverage. The United States is also trying to broker Kurdish unity talks between rival Syrian Kurdish groups, with the help of the Iraqi Kurdistan Regional Government, as Amberin Zaman explains. Gen. Frank McKenzie, the head of US Central Command, met with SDF Commander Mazlum Kobane in northeast Syria, Jared Szuba reports.

Erdogan seems to have found his footing, for now, in Syria, but it’s a minefield. He seems more confident in his ability to play his strong personal ties with both Putin and US President Donald Trump to Turkey’s advantage. But the status quo is mostly an illusion in this region. Zaman foresees much horse trading ahead. “Allowing Turkey to grab more land in the Kurdish-controlled northeast, notably the mainly Arab town of Qahtaniyah, could be a quid pro quo for letting government forces advance further and win full control of the M4 and M5 highways,” she writes. “But Ankara is unlikely to agree to the kind of regime offensive that would send millions more Syrian refugees to seek shelter in Turkey.”

Increased assault on the PKK in Iraq

Another sign of Erdogan’s confidence and ambition is his renewed assault on PKK bases in Iraqi Kurdistan over the past four weeks. This is in one sense nothing new; such attacks have occurred episodically for more than three decades. The Iraqi and Kurdistan Regional governments have of course protested the Turkish attacks. The remoteness of the PKK bases in the Qandil mountains in Iraqi Kurdistan tends to mitigate the political fallout of the attacks among Iraqis, although the PKK has a following among Kurds, and this puts the KRG leadership in a bind.

What may be different this time, as Fehim Tastekin points out, is that the Turkish operations include attacks “not only the areas of Qandil, Zap, Avasin-Basyan, Gara and Hakurk, where PKK camps are located, but also the Yazidi-populated Sinjar and the Makhmour camp near Kirkuk, which is home to Kurdish refugees from Turkey.” Tastekin writes that up to 100 villages have been evacuated.

Iraq, of course, is dealing with more pressing domestic and national security matters these days such as COVID-19, the role of Iran-backed militias, an economic crisis, and political protests. But Baghdad has staked a claim on Iraqi sovereignty, so its protests to Turkey have been tougher than in the past, and backed more forcefully by the Arab League. Egypt and the United Arab Emirates, in particular, are seeking to thwart Turkish regional ambitions (more on that below). Turkey has made clear it is not looking for a fight with Iraq, only with the PKK, and is providing Iraq with COVID-19 assistance.

Erdogan also has a spring in his step over his so far successful intervention in Libya, which changed the course of the war to the advantage of the Libyan Government of National Accord and more broadly in North Africa, as Metin Gurcan explains.

Let’s start with Libya. Turkey’s military intervention, including sending jihadi types from Syria to back the Government of National Accord, swayed the civil war in favor of the government and against the armed insurgency by Gen. Khalifa Hifter. Erdogan has the UN on his side in backing the government, which has an Islamist bent. Hifter has the support of France, Egypt, the UAE and Russia, although Erdogan and Putin have seemed to work out their differences, as Kirill Semenov wrote last month.

In the meantime, Erdogan has tweaked French President Emmanuel Macron in Libya and North Africa over France’s colonial past, as Tastekin reports here, while putting down a marker that it will challenge Egypt and UAE influence in the Maghreb, including Tunisia, as Mohamed Ali Ltifi reports.

A way forward for US-Turkey ties?

Erdogan’s confidence and ambition are tough to shake, but Turkey still has no easy out in Syria, an uncertain front and future in Libya and North Africa and a brittle relationship with Washington that rests mostly on the chemistry between Trump and Erdogan. Erdogan’s decision today to move ahead with the re-conversion of the Hagia Sophia back into a mosque will be another irritant in US-Turkey relations, as Amberin Zaman reports. US Secretary of State Mike Pompeo last week urged Turkey not to do so, saying such a move would diminish the legacy of the building. In the midst of the seemingly irresolvable tensions in US-Turkey ties, Dalia Dassa Kaye and Nilsu Goren suggest the US draw Turkey into a regional security dialogue focused on preventing the proliferation and use of weapons of mass destruction in the region.