The Takeaway: Is Erdogan’s threat to Syrian Kurds linked to US election?

Turkish president also calculates risk of escalation in Idlib; a primer on the Idlib ceasefires; plus: four more quick takes on Syria and Iraq. 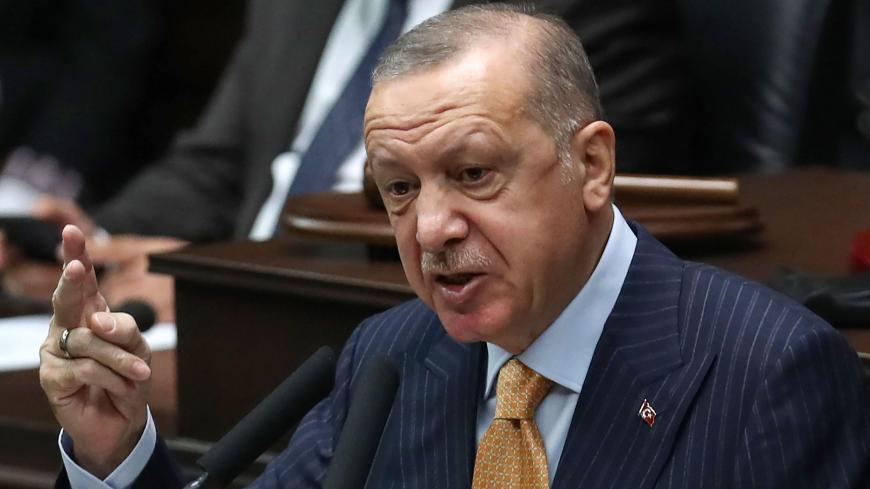 Gloves off? Turkish President Recep Tayyip Erdogan warned that he may be ready to send troops into northeastern Syria again against Kurdish groups that he considers linked to the Kurdistan Workers Party (PKK), which Turkey has designated as a terrorist group.

“If the terrorists here are not cleared as we were promised, we have the legitimate right to mobilize once again," he said today, referring to the Turkish invasion and subsequent occupation of parts of northeast Syria in October 2018.

Erdogan said on Oct. 24, “A new terrorist formation near the Iraqi border in Syria have been accelerated … I would like to say this without beating around the bush: Turkey will never allow the establishment of a terror state right beside its borders.” (More on the Iraq angle below.)

Coincides with US vote. A remobilization into Syria may be calculated with an eye on the US presidential election. US President Donald Trump greenlit the previous Turkish assault on Syria after speaking with Erdogan; their relationship is direct and friendly. Former US Vice President Joe Biden might adopt a frostier posture if he wins the election on Nov. 3, as we reported last week.

A two-front war? A new attack on the northeast could expose Turkey to a two-front war. Turkish forces are also positioned in and around Idlib province in the northwest, following a series of agreements among Russia, Iran and Turkey going back to 2017 (see below). Those arrangements may be in their final days. Earlier this month, Turkey abandoned a series of outposts in Idlib in a move the Russian Foreign Ministry spokesperson described as in accordance with “the existing agreements.” Erdogan described Russia’s airstrike on Turkish-backed Syrian National Army forces on Oct. 26 as a sign that “a lasting peace and calm in the region is unwanted,” but Erdogan may be unwilling to risk escalation with the United States in the northeast and Russian President Vladimir Putin over Idlib.

Partners, not allies. The Russia-Turkey relationship may be showing cracks, Semih Idiz writes, over differences in Syria, Libya and Nagorno-Karabakh. Russian Foreign Minister Sergey Lavrov said, “We have never qualified Turkey as our strategic ally,” during a radio interview, adding, “Turkey is a very close partner; in many areas this partnership is strategic.” Putin told the annual Valdai Club last week that “our cooperation with Turkey is expanding. … No matter how tough President Erdogan’s stance may look, I know that he is a flexible person, and finding a common language with him is possible.”

Idlib: the Syrian Alamo. Idlib in northwest Syria has emerged as the last refuge and stand for a hodgepodge of Syrian armed opposition, Islamist and jihadist forces, many backed by Turkey. Hayat Tahrir Al-Sham (HTS), the main power in the province, has been designated by the United States as a terrorist organization and by the UN Security Council as a sanctioned entity linked to al‑Qaeda. Turkey’s three-year mission has been to co-opt more moderate elements in HTS. This may have been mission impossible from the start, but give Turkey its due. Ankara did get HTS’ core to distance itself from some of the most reprehensible characters and begin to coordinate its actions and move closer to Turkey’s orbit. Breakaway radical elements, like Huras al-Din (“Guardians of Religion”), the target of a recent US drone strike, wanted no part of an HTS makeover that involved accommodation with Turkey.

Fehim Tastekin sums up the situation in Idlib. “The groups loyal to Turkey have often acted as criminals. Islamist groups willing to get along with Turkey are plagued by infighting. And those designated as terrorists yet treated as ‘acceptable’ groups have shown a pragmatic, collaborative face but are no different from al-Qaeda at the end of the day. When it comes to outright al-Qaeda affiliates, Turkey has yet to take them on, having left the job to the United States and HTS for now.”

Our take: The Russian airstrikes may signal a coming final assault on Idlib province by the Syrian military as Erdogan weighs another move against Kurdish forces in northeast Syria. Part of the calculation, by both Putin and Erdogan, is the US election. While it’s risky even with Trump, Biden’s reaction is a greater unknown, and he has promised to be tougher on Putin and Erdogan. Erdogan, Trump and Putin all operate transactionally and have managed to keep their differences from escalating to crises, despite many differences.

To understand the flow of events in Idlib since 2017, it’s worth reviewing three key agreements among Russia, Turkey and Iran to impose and enforce a cease-fire in the province and remove radical and terrorists groups.

Astana (May 2017): Russia, Turkey and Iran agree to de-escalation zones in Syria “as a temporary measure,” the establishment of Turkish outposts and checkpoints and for all parties to take “all necessary measures to continue the fight” against the Islamic State, al-Qaeda and affiliated groups.

Sochi (May 2018): The Sochi agreement committed Russia and Turkey to a “demilitarized zone” in the Idlib de-escalation zone (DMZ), for Russia to use “all necessary measures” to hold off attacks on Idlib, for “all radical terrorist groups to be removed” from said DMZ by October 2018 and for joint Russian-Turkish patrols in the DMZ.

Additional Protocol (March 2020): Following a Russian-backed Syrian offensive against Idlib province that began in December 2019 and included Syrian attacks on Turkish outposts resulting in clashes and casualties on both sides, Russia and Turkey agreed to a cease-fire and joint patrols along the strategic M4 highway, which came under Syrian control as a result of the fighting.

Syrian opposition awaits US election outcome. Syrian opposition fighters are anxious over the US presidential elections, with mixed views of both candidates. US President Donald Trump has not been an advocate of the opposition, but has twice used force in response to Syrian chemical weapons and has kept up the pressure on Syrian President Bashar al-Assad via sanctions. Some worry that Biden will return to the policies of former President Barack Obama that they consider too passive with regard to the opposition and too hesitant to use force. Read the report here by Sultan al-Kanj in Syria.

HTS crackdown on journalists in Idlib. Activists and journalists working in and around Idlib province face restrictions, harassment and threats from the HTS-led government, we report here.

PKK adds to volatility in Iraqi Kurdistan Region. Shelly Kittleson has the report here on how the PKK has escalated tensions inside Iraq among Kurds, Yazidis and the central government.