US may try to raise the stakes for Russia in Syria 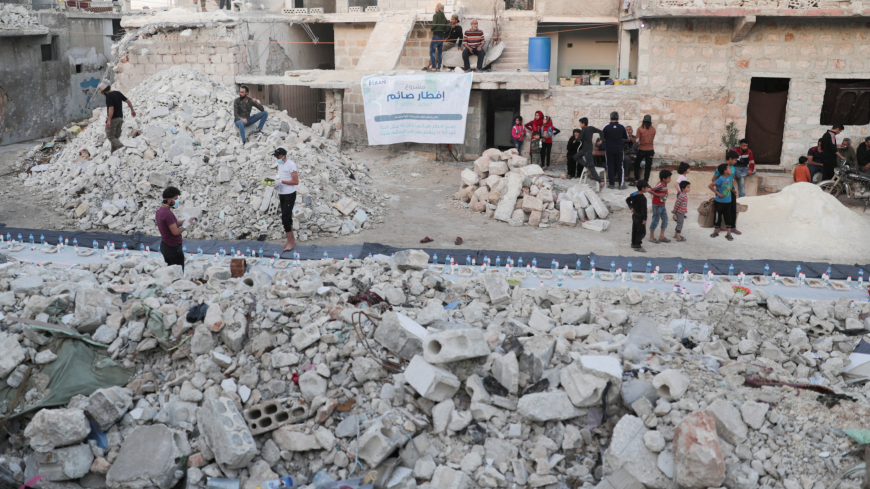 Volunteers prepare iftar meals in a damaged neighborhood amid fear of the coronavirus in Atarib, Aleppo countryside, Syria, May 7, 2020. - REUTERS/Khalil Ashawi

A way forward at the UN for Syria

There is a Security Council vote in July to reauthorize the two remaining assistance corridors from Turkey into Syria. The United States is also seeking to reopen a crossing from Iraq that had been closed in January as a result of Russian and Chinese pressure (more below).

The situation in Syria is dire. There are already 5 million refugees and 6.2 million internally displaced Syrians; combined, that’s about half of a prewar population of 22 million. The economy, because of war, corruption and sanctions, barely exists. And Syria, like the rest of the world, is dealing with COVID-19.

The resumption of fighting in Idlib, where there is presently a pause in the Russian-backed Syrian offensive, could produce an additional tens of thousands or even hundreds of thousands of displaced people.

Russian President Vladimir Putin is unlikely to buckle to US criticism on humanitarian grounds; he never does. And while Putin considers Syria a success, he may, as Colin Clarke and William Courtney write in Newsweek, be growing weary of the enterprise.

There is no foreseeable dividend for Russia in Syria. It is instead a financial drain, a sinkhole, at a time when falling oil prices and COVID-19 have set back the Russian economy.

Putin may therefore be looking to cut costs and share the burden.

US envoy for Syria James Jeffrey said last week that the United States is seeking to present Russia a "way forward" in Syria through the UN, "but that requires them distancing themselves to some degree from Assad and from the Iranians."

The United States can raise the stakes with Russia by putting Assad and Iran at the top of an already daunting agenda that includes humanitarian assistance; support for the UN cease-fire initiative and political transition talks; post-conflict reconstruction and the refugee crisis; and counterterrorism cooperation, etc.

The humanitarian corridors, priorities for the United States, help at the margins. There is no need here to recount the scale of the tragedy, which will greatly increase if fighting breaks out again in Idlib.

Things only begin to get meaningfully better when the war stops. And for that to happen, the United States and Russia need to find common ground at the Security Council. Otherwise, forget it.

Absent a breakthrough in US-Russian coordination, it’s hard to imagine Syria getting any better, especially for the Syrians. We are in the ninth year of the war. Turkey is also facing a quagmire in Syria: It is a costly and seemingly endless occupation, with a two-front conflict against Syrian forces in Idlib and the Kurds in the northeast. This in addition to Turkey's hosting 3.6 million Syrian refugees.

That’s why we wrote back in February about the need for an urgent conversation between US President Donald Trump and Putin about Syria. That time finally may be close. Their personal connection matters. The Syrian crisis urgently requires collective action to have the slightest chance of being resolved. “US leverage at the UN is unmatched,” we wrote. “Putin, for all his bravado, neither wants nor needs more trouble with the United States. He wants to be the broker of an endgame in Syria, and knows that eventually he has to deal with Trump.’

The politics of assistance corridors

The Yaroubiyah crossing (from Iraq), one of the transit points closed in January, was a vital pathway for assistance to the Kurdish autonomous region.

With the onset of the COVID-19 pandemic, the region is now suffering without medical supplies from the World Health Organization.

Russia is unlikely to give in on Yaroubiyah, but may allow for reauthorization of the other two corridors in order to keep the peace with Turkey, so aid can reach areas under Ankara’s control, as Amberin Zaman explains.

Turkey does not allow aid to flow from areas under its control to those under Kurdish administration.

Russia’s calculation on these humanitarian corridors, in other words, has little to do with humanitarian assistance, and more to do with its leverage and pressure on Turkey — which the United States is trying to undermine — and advancing the cause of Syrian sovereignty over all of Syria.

Fehim Tastekin this week has the scoop on the money train for the terrorist group Hayat Tahrir al-Sham (Liberation of the Levant) via customs fees at border crossings, in addition to the shakedowns of shopkeepers and control of services and utilities, including trade with the Syrian government.

Jeffrey said in February there are at least 7,000-10,000 Jabhat al-Nusra-linked members in Idlib, although they are presently not engaged in transnational terrorism.

Turkey has been trying and failing for three years to break off the moderates from the jihadi core of Hayat Tahrir al-Sham to prevent a final Russian-backed Syrian offensive to retake Idlib, which would compound the humanitarian crisis.

Hayat Tahrir al-Sham faces its Alamo in Syria, with nowhere for it to go. Hayat Tahrir al-Sham leader Abu Muhammad al-Jolani is therefore attempting a makeover, that he is really just an anti-Assad rebel, part of the nationalist Syrian opposition fabric, forget about all that jihadi stuff, he’s put it behind him.

Former Israeli prime minister to be interviewed on Al-Monitor podcast

The first, "On the Middle East," included an interview with Al-Monitor correspondent Ben Caspit on “What will be Netanyahu’s Legacy?” The link is here.

The second, "On Israel," hosted by Caspit, airs Monday. Caspit's guest will be former Israeli Prime Minister Ehud Olmert. The link is here.