Turkey in uproar over McGurk

The Turkish media's outlandish attacks on US envoy Brett McGurk hint at the anxiety in Ankara over US relations with Syrian Kurds. 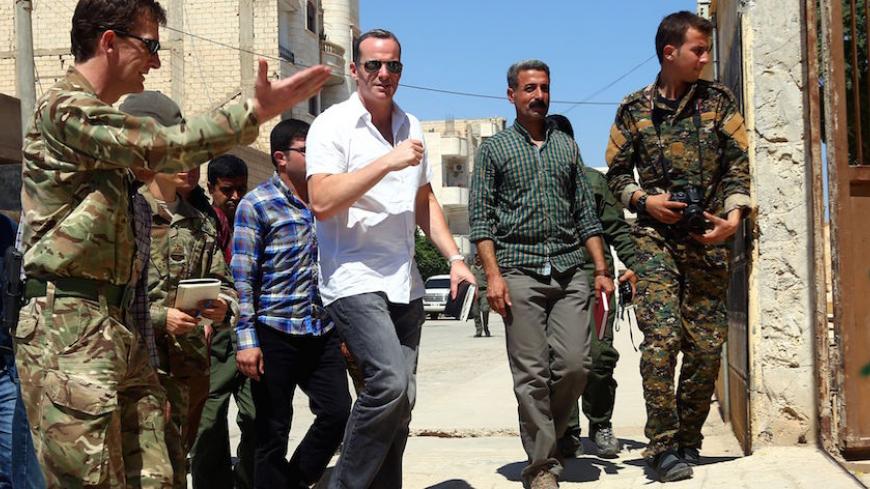 Brett McGurk (C), the US special envoy for the global coalition to defeat the Islamic State, and Rupert Jones (L), the deputy commander of Combined Joint Task Force Operation Inherent Resolve, arrive for a meeting with the Tabqa Civil Council in Tabqa, west of Raqqa, Syria, June 29, 2017. - GETTY/Delil Souleiman

Turkey’s scapegoating of US special envoy Brett McGurk over the military partnership between the United States and the Syrian Kurds grew crazier today, with one pro-government newspaper labeling him a murderer.

“US envoy murders 46,000 civilians in Iraq, Syria,” blared the front page of the conservative Yeni Safak. “The coalition forces, led by … McGurk … who has recently come to light with his anti-Turkish statements, slaughtered 46,000 civilians in operations in Iraq’s Homs and Syria’s Raqqa provinces.” The destruction of Mosul, the flattening of Raqqa, famine, lack of medicine … These and other calamities befalling Syria and Iraq are all apparently the doings of McGurk, the US envoy for the global coalition against the Islamic State (IS).

Another pro-government mouthpiece, the Star, unveiled the sinister US plan to establish a Kurdish state in northern Syria, replete with detailed maps. This would involve dispatching with Turkish-led Operation Euphrates Shield forces wedged between the Syrian Kurdish enclave of Afrin and the Kurdish-controlled chunk of territory running from the town of Manbij to the Iraqi Kurdistan border.

Other papers carried images of US military equipment being delivered to the Syrian Kurdish People’s Protection Units (YPG), ostensibly to be used for the ongoing campaign to liberate Raqqa. “Its raining Kalashnikovs,” read the front-page headline of the mass circulation daily Hurriyet. Turkiye reported on an eight-member team of “special US advisers” to be deployed across the Kurdish-controlled region to work on “public order” and public administration,” all allegedly part of the effort to create a new Kurdish state.

It is no secret that Turkey is enraged by the alliance between the United States and the YPG and fumes about McGurk’s publicized visits to the Syrian Kurdish zone, where he hobnobs with militia commanders, some of whom are thought to have begun their careers fighting Turkey as part of the Kurdistan Workers Party (PKK). Despite this, why the new bout of hysteria?

On the surface, some comments made by McGurk appear to have triggered it. In a July 27 panel discussion at the Middle East Institute in Washington, McGurk alluded to Turkey’s role in clearing the path for al-Qaeda-linked Hayat Tahrir al-Sham (HTS) to tighten its grip on Syria’s Idlib province, on the Syrian border, by “looking the other way” as “thousands of tons of weapons” and foreign fighters entered Syria.

McGurk said Idlib had become an al-Qaeda safe haven. In a July 27 interview, he told the New Yorker, “We are going to have to work with the Turks and others to degrade this presence.” Turkish officials believe that by “others,” McGurk means the YPG.

This in turn, they believe, ties in with the United States’ “secret” plan to deploy Special Operation Forces to Afrin, from which they would launch an operation with the YPG to clear Idlib of HTS and in the process fulfill the Syrian Kurds’ long-held dream of reaching the Mediterranean Sea. The other big bonus would be that the Kurds would be able to link their cantons, thus establishing a PKK-led state running the length of the Turkish border. So, anyway, goes Ankara’s reasoning.

In the Turkish imagination, proof of US intentions is the establishment of Forward Start, a tiny team of US State Department and US Agency for International Development employees to help coordinate stabilization efforts in Raqqa and its environs. McGurk’s role is to lay the groundwork for an independent Kurdish state.

The truth is that US policy remains to degrade and destroy IS, and the YPG-led Syrian Democratic Forces remains its best partner for the job. Coalition officials speaking on condition of anonymity said the United States has no intention of getting mired in Afrin, not least because of Turkish sensibilities and also because Afrin and the skies above it are dominated by Russia. The al-Qaeda threat in Idlib is of deep concern, but not one that can be directly addressed by the coalition in the near future. Short of a radical change in US policy, anything that follows the defeat of IS will not be aimed at governance and state building, but stabilization, to ensure that IS cannot return.

Turkey largely has itself to blame for much of the current situation, not McGurk. The PKK is a result, not the cause, of Turkey’s failure to address the grievances of its 14 million-plus Kurds. Had Turkey continued to pursue peace talks with imprisoned PKK leader Abdullah Ocalan, not locked up the country's moderate Kurdish leaders and opened a dialogue with the YPG, they might have even joined forces against IS, and relations with the United States would not have been so badly frayed. In short, Turkey would have been far happier and in a more stable place.

As things stand, however, Turkish leaders are understandably jittery about the PKK acquiring new arms and training via the YPG. That it would come from the United States, a NATO ally, makes everything harder to digest. Honesty and transparency are in urgent order on both sides.

Yet, attacking McGurk and leaking the location of US Special Operations Forces in northern Syria is hardly the best formula for finding a sympathetic ear in Washington. To the contrary, it only sharpens anti-Turkish sentiment among those briefing Secretary of Defense Jim Mattis for his upcoming trip to Turkey.