Turkish President Recep Tayyip Erdogan raises the stakes in Syria by hinting that Ankara will launch a new incursion to build on its previous one. 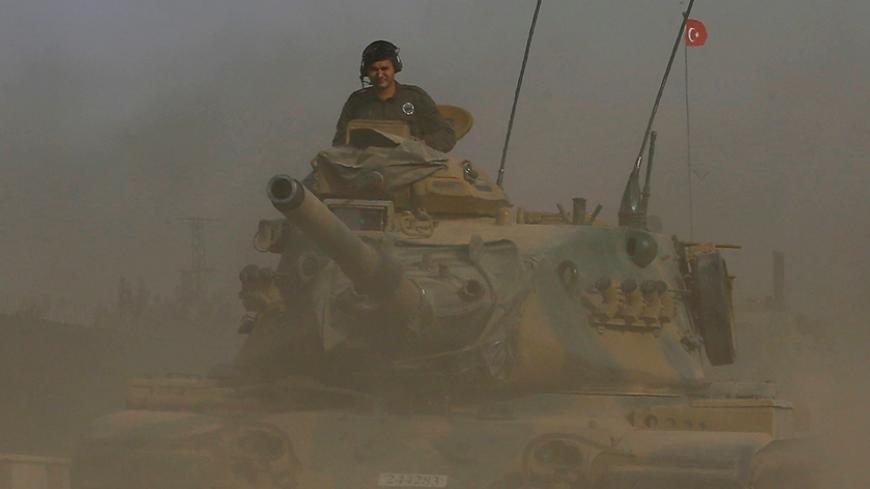 A Turkish army tank drives toward Karkamis on the Turkish-Syrian border in the southeastern Gaziantep province, Turkey, Aug. 25, 2016. - REUTERS/Umit Bektas

Turkish President Recep Tayyip Erdogan’s latest public statements indicate that an operation by Turkey may be imminent against Kurds in northern Syria, who operate under the banner of the People's Protection Units (YPG). At least this is the widespread impression he is giving.

The reinforcement of Turkish forces along the Syrian border appears to confirm this as well. It seems more of a question of when, not if, this operation, which press reports say will be codenamed “Euphrates Sword,” will begin.

“We are determined to push deeper the dagger we drove into the heart of the terrorist formation’s project in Syria with new advances,” Erdogan said in an address to a large crowd of supporters in the eastern Turkish city of Malatya on Aug. 5.

The dagger he referred to is Operation Euphrates Shield, which Turkey mounted in August 2016 and ended in March this year.

Indicating that Ankara would take “important steps” very soon, Erdogan said, “It is patently clear that the issue in Syria has long surpassed the limits of combating a terrorist organization.”

“When the president says that the issue in Syria has long surpassed the limits of combating a terrorist organization, he is referring to Russian and US plans for the future of Syria,” Zeyrek wrote in his column in the daily Hurriyet.

“These two countries open a new base in Syria every day. They foresee autonomous regions for Kurds in their draft constitutions for Syria,” Zeyrek added, also pointing to the YPG’s efforts to alter the demography of the territories it has captured.

These are red lines for Ankara, which has watched angrily as the United States provides provisions to the YPG. Like Moscow, Washington refuses to list the YPG as a terrorist organization.

A recent Turkish news report, based on a leak by government sources, even claimed that Washington had provided the group with tanks. The US Embassy in Ankara later denied this claim.

The only thing that appears to be staying Ankara’s hand presently, although this is not expected to last long, is its awareness that a new incursion into Syria that targets the YPG is likely to be frowned upon by the United States and Russia.

Washington and Moscow have officially expressed their displeasure in the past when the Turkish military mounted strikes against the YPG. Turkish shelling of YPG targets in April, for instance, elicited reprimands from both superpowers.

Russia also rushed to protect the YPG earlier this year in the Kurdish-held city of Afrin, near the Turkish border, when Ankara signaled that it was preparing to move on that city. Washington also opposed such a move by Turkey on the grounds that it would undermine the planned onslaught against the Islamic State (IS) stronghold of Raqqa — an effort that was to be spearheaded by YPG fighters on the ground.

Regardless of tensions with Washington and Moscow over the YPG, Turkey remains part of the US-led coalition against IS and is also cooperating with Russia and Iran in the "Astana process," which aims to alleviate the Syrian crisis.

There are also reports of a possible trade-off between Ankara and Moscow regarding Kurdish-held Afrin and the city of Idlib, where radical Islamist groups that have Turkish backing are poised against each other.

Turkish, Russian and Iranian officials are meeting in Tehran this week to discuss de-escalation zones in Syria. They are also expected to discuss the situation in Afrin and Idlib. If successful, this could ease tensions in northern Syria and delay a Turkish incursion.

The risk for Ankara is that a Turkish operation that does not have US and Russian blessings could further weaken its hand in the Syrian talks. Erdogan nevertheless appears keen on this operation.

A source close to the Turkish Foreign Ministry, who spoke to Al-Monitor on condition of anonymity, said, “Turkey’s moves in Syria will be based on its threat perceptions, not on what others say.”

News reports that Euphrates Sword was in the making first broke in June, showing that this operation has been in the works for months.

Turkey is concerned that Washington and Moscow are preparing the groundwork for an autonomous and contiguous Kurdish region in Syria along Turkey’s border. Erdogan says Ankara is determined to prevent this.

Ankara is also vilifying Brett McGurk, Washington’s envoy overseeing the fight against IS. To Ankara, McGurk is a latter-day Lawrence of Arabia. Pro-government media outlets in Turkey are rife with articles accusing McGurk of trying to carve out a Kurdish entity in Syria at Turkey’s expense.

Erdogan says the new operation in Syria will build on Operation Euphrates Shield, which was ostensibly against IS. Ankara, however, made it clear that “all terrorist organizations” would be targeted, which for Turkey includes the YPG.

Achieving the aims of Operation Euphrates Shield proved to be more complicated than expected and took longer to complete than planned. The Turkish military and the Free Syrian Army finally managed to capture 2,000 square kilometers (770 square miles) from IS.

As far as Ankara is concerned, Operation Euphrates Shield also put a halt to Kurdish plans to capture a large swath of territory between the cities of Kobani in the east and Afrin in the west. Both cities are held by the YPG. The territory in between them, stretching from the Turkish border in the north to al-Bab in the south, is controlled by Turkey and the Free Syrian Army.

Erdogan’s Malatya speech came immediately after a major reshuffle in the Turkish Armed Forces. Zeyrek said the first task of the new land, air and navy commanders will be the Syrian operation.

Retired Brig. Gen. Naim Baburoglu believes the aim of Turkey’s next operation will be limited to establishing a security zone along Turkey’s border and not have bigger aims such as capturing Afrin from the YPG.

“Turkey will still have to fight the YPG as it tries to establish this zone, which will include the city of Tel Rifaat, as well as the region between Afrin and Idlib,” Baburoglu told Al-Monitor. “As long as Turkey stays away from Afrin itself, Russia and the US will accept Turkey’s new operation.”

As for Erdogan’s Malatya speech, Baburoglu believes that was intended to please a domestic audience rather than provide a signal that a major Turkish incursion into Syria is about to be unleashed. Baburoglu said a major incursion could leave Turkey embroiled with very high casualties in places like Afrin and Idlib, and was therefore unlikely to happen.

Officials in Ankara are more than aware that executing Operation Euphrates Shield proved to be much more difficult than expected. It was successful in the end because Turkey was fighting IS and enjoyed support from Washington and Moscow. That support evaporated as soon as Turkey turned on the YPG.

Euphrates Sword could prove to be equally if not more difficult as long as the YPG continues to enjoy support from the United States and Russia.