The next battle in Syria

With the war on the Islamic State winding down, other tensions in Syria are dialing up as Israel and Turkey worry over forces amassing on their borders. 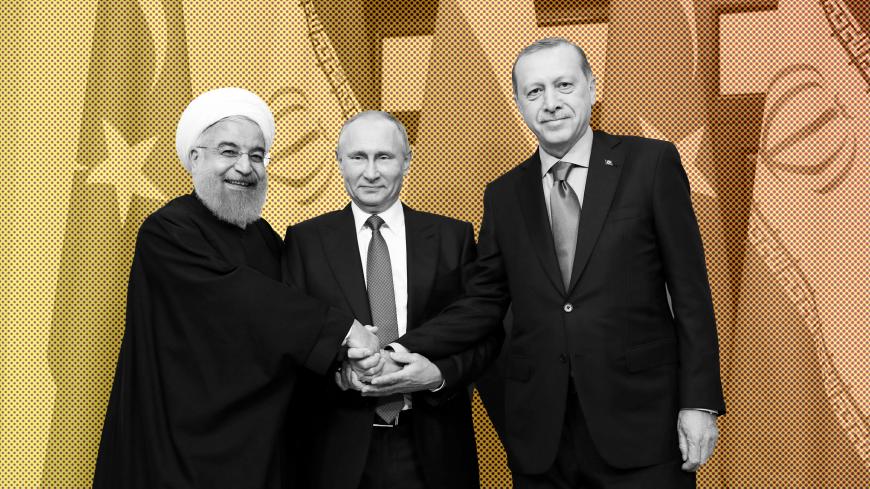 Turkey, Russia and Iran agreed Nov. 22 on fighting terrorist groups in Syria at a tripartite presidential meeting in the Russian Black Sea resort of Sochi. Nearly concomitantly, Israeli Prime Minister Benjamin Netanyahu alluded to a possible action in Syria against Iran and its proxies, against the backdrop of a US escalation on Iran. As the war on the Islamic State (IS) in Syria winds down, will the next regional “terror” focus be on Kurdish and Shiite militias?

The fall of much of IS territory in November to the Syrian Democratic Forces (SDF) or to forces aligned with the regime of Syrian President Bashar al-Assad heralds a new tug of war between international and regional powers in Syria.

At the meeting in Sochi, Turkish President Recep Tayyip Erdogan declared that Turkey would not accept the existence of “terrorist groups in Syria,” referring to the Syrian Kurdish People’s Protection Units (YPG). Around the same date, Israeli media reported increasing threats voiced by Israeli security figures of a possible major strike on Iranian presence in southern Syria, while the United States has been much more vocal about rolling back Iran.

On Nov. 26, the Times of Israel reported that Netanyahu warned Assad that Israel will intervene militarily in the Syrian civil war if the Syrian president gives formal permission to Iran to establish a military presence in Syria.

For Turkey and Israel, the war on terror has not ended with the war on IS, which they view as a secondary danger to their national security.

Turkey considers the YPG and its political wing, the Democratic Union Party (PYD), as directly affiliated with the Kurdistan Workers Party, which is fighting against the Turkish state and which the United States has designated a terrorist group. The YPG is a main faction in the SDF, an alliance comprised of Kurdish and Arab militias, which led the ground campaign against IS in northern Syria and was directly supported by the US-led coalition. Turkey sees the expansion of Kurdish control over the area running along its border with Syria as a direct threat to its national security. According to a recent article by Al-Monitor columnist Amberin Zaman, the YPG controls nearly one-fifth of Syria and more than half of Turkey’s 800-kilometer (497-mile) border with Syria.

On Dec. 3, the Military Times reported that the US military appears to be shifting its stance in Syria, with the program to arm the Kurdish opposition coming to a close and being replaced by support to local police and security forces. These reports follow White House Press Secretary Sarah Huckabee Sanders’ announcement Nov. 28 that the United States would stop actively providing arms to Syrian Kurds, as well as a statement by Turkey's Foreign Minister Mevlut Cavusoglu who said the United States would stop providing weapons to the YPG.

Wladimir van Wilgenburg, a journalist focusing on Kurdish issues who covered the Raqqa battle from Syria, told Al-Monitor he believes that the shift in support to the Kurds is normal and driven by military operation needs. “I do not believe that support to the Kurds will change. However, it is true that there is no clear and coherent US policy on Syria. When it comes to the tripartite [Russian, Turkish and Iranian] vow to fight terror, it mostly aims at the [Hayat Tahrir al-Sham] Idlib and [Kurdish] Afrin area. It would be difficult for Turkey to attack Afrin since the Kurds are very well dug in there and will fight back. It is a complicated situation and I doubt Russia will allow Turkey to attack the Kurds, despite the improving relations between Turkey and Russia since 2016,” van Wilgenburg told Al-Monitor.

This is an opinion also shared by SDF spokesman Mostafa Bali, who told Al-Monitor that it was mostly the Turks who had circulated the rumor that the United States would stop providing Kurdish forces with weapons. “It is true — in the absence of ongoing battles such as the Raqqa offensive, Kurdish forces are currently not in need of sophisticated weapons. The Pentagon has declared it will continue to support us and we know that Washington considers us as true partners in the anti-terror coalition,” he said.

The Kurdish position in Syria would nonetheless be weakened by a possible US withdrawal from Syria, according to Zaman, who was told this could happen before the end of 2019, although confusion surrounds the issue with the Pentagon declaring Dec. 5 that the United States would remain in Syria as long as needed.

In such a context, Turkey and the Assad regime would likely join forces against the Kurds. But the regime has implied it could be open to Kurdish autonomy, with experts telling Al-Monitor such a deal would be against a YPG withdrawal from majority Arab areas. Yet the regime is known for going back on its word, and an autonomous federal area in northern Syria would likely threaten Assad’s hold on the country.

While Syria and Turkey could unite to counter the Kurds, the regime appears to be in a tricky position on its southern front with Israel and the United States over Iranian presence there. Besides its massive deployment in Syria, alongside those of its proxies such as Hezbollah and Iraqi militias, Iran has provided financial and logistical support and training to the Assad regime. In October, US Secretary of State Rex Tillerson told Iraqi militias to “go home.”

“The pushback on Iran is clearly on the US agenda, but it remains a mystery how they are going to go about it. President Donald Trump also supports any Russian initiative on Syria, but we need to see what the Russians will come up with,” Middle East Institute Iran expert Alex Vatanka told Al-Monitor.

Israel is increasingly wary of Iranian expansion in Syria, despite a Nov. 12 cease-fire deal that would include the expulsion of Iranian-backed militias from the border with Israel in the Golan Heights. Avi Melamed, fellow at the Eisenhower Institute, told Al-Monitor that Netanyahu’s threats are very serious and should not be taken lightly. Israel has been upping the ante in south Syria with two strikes targeting Syria on Dec. 2 and Dec. 4.

“Clearly, Iran and Russia are not on the same page over south Syria, yet the US is not doing much in the absence of clear thinking over the Syrian dossier. Another question is if Assad is powerful enough to stop Iran from meddling on its southern border,” Vatanka said.