Pro-government analysts say Iran is trying to prevent Turkish influence in Iraq, and they accuse Tehran of “strategic shallowness,” which they say it will come to regret. 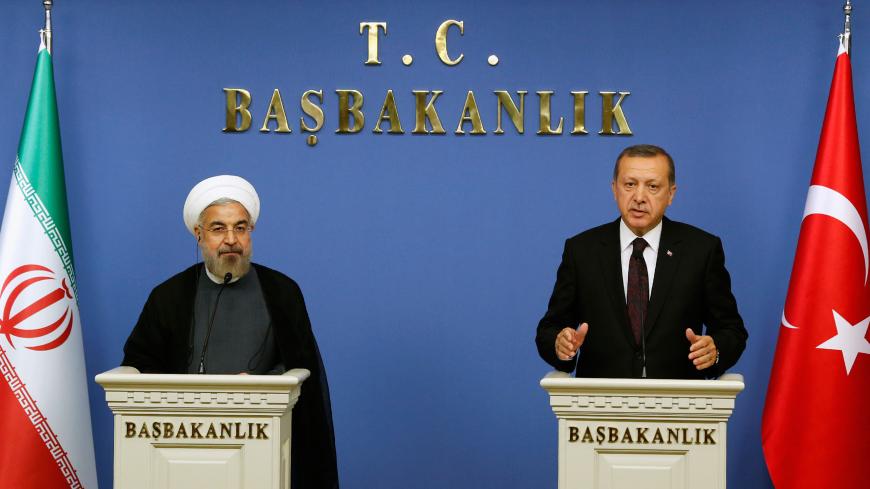 Iran’s refutation of official Turkish claims that it supports the military operation launched by Turkey against the outlawed Kurdistan Workers Party (PKK) in Iraq’s Qandil region has stoked more resentment for Tehran in Ankara.

President Recep Tayyip Erdogan told a crowd of supporters during an election rally in the central Anatolian city of Nigde on June 11 that Turkish forces had started an operation the previous day against PKK camps in the Qandil region. This was followed by remarks from Foreign Minister Mevlut Cavusoglu during a television interview in which he indicated that Ankara was in contact with Tehran about conducting joint military operations in the region; the Qandil Mountains extend into Iran.

“Our offer to Iran was to carry out the operation together. Iran, in its remarks at least, has voiced very important support,” Canikli said in an interview with the government-controlled Anadolu Agency.

Shekarchi, however, put a damper on Ankara’s optimistic expectations. “The Islamic Republic of Iran thinks military action against the territory of another country without permission from its legitimate government, with the excuse of combating terrorism, is illegal,” he said in his rebuttal of the Turkish ministers. “Iran will never support initiatives that will damage the sovereignty of neighboring countries,” he added.

These words represented a serious embarrassment for Ankara in the light of Cavusoglu's and Canikli’s remarks. This was not the first time Iran has angered Ankara over Turkish military operations against the PKK in Iraq and the Kurdish People's Protection Units (YPG) group in Syria.

Iranian President Hassan Rouhani enraged officials in Ankara in April after he indicated that the Turkish military presence in Syria was a violation of that country’s territorial integrity and called on Turkish forces in the northern Syrian city of Afrin to be pulled back and for the city to be turned over to the Syrian regime.

Afrin was captured from the YPG by the Turkish military in March under Operation Olive Branch, which Turkey launched in January. Turkey says the YPG is linked to the PKK and has declared war on the group in Syria.

Like Russia — Turkey’s other “partner” in Syria under the Astana process — Iran also maintains that only foreign troops invited by the Syrian and Iraqi governments are legally present in those countries. Ankara counters by arguing that Baghdad and Damascus have lost control over parts of Iraq and Syria used by the PKK and the YPG, and says this has left Turkey with no choice but to act unilaterally in order to ward off the existential threat to the country’s security from these groups.

During his interview with Anadolu Agency, Canikli also suggested that Baghdad was in full agreement with Ankara regarding an operation in Qandil. Iraqi Prime Minister Haider al-Abadi, however, denied this. Responding to remarks from Turkish government officials showing that such an operation was imminent, Abadi had called on Ankara to respect his country’s sovereignty.

Abadi added that there would be no military coordination with Turkey during such an operation. He went on to claim that the talk about an operation in Qandil out of Ankara was designed to shore up the support base for Erdogan and his Justice and Development Party prior to Turkey’s presidential and parliamentary elections June 24.

Erdogan and the AKP have strongly rejected claims — which have also been voiced by the Turkish opposition — of a link between the timing of the Qandil operation and the elections. He has not held back, though, from using this operation and the capture of Afrin in March to hit at his political rivals during his election campaign. Erdogan’s remarks during his Nigde rally are a case in point.

Ankara and Baghdad also remain at odds over the presence of the Turkish military in Bashiqa near Mosul. Iraq has repeatedly called on Turkey to pull back its forces there, a demand Ankara has refused to meet so far, citing the threat from the PKK.

Hopes were raised in Ankara that cooperation between Turkey and Iran over the Kurdish issue would increase after both countries rejected the results of the independence referendum held by the Kurdistan Regional Government in northern Iraq in September 2017.

Such remarks — which clearly indicate that the Qandil operation is designed to give Turkey a military foothold in the region and that Turkish forces would remain there for the long haul — have clearly been met with dissatisfaction in Tehran. Ankara, eyeing its relations with Iran for a host of economic and political reasons — including its ongoing cooperation with Tehran and Moscow for a settlement to the Syrian crisis — has largely held back from officially hitting back at Iranian criticism of its operations in Iraq and Syria.

The job of lashing out at Iran has, however, been taken over by columnists and analysts from government-friendly media and think tanks. Responding to Shekarchi, Burhanettin Duran — the general coordinator of the government-funded Political, Economic and Social Research Foundation (SETAV) — wrote that Iranian officials are fueling hostility toward Turkey in Baghdad.

“They are concerned that the Turkish presence in the Qandil Mountains and, more broadly, northern Iraq will have long-term consequences,” Duran wrote in his column for the pro-government Daily Sabah. “Needless to say, that kind of presence would make Turkey a much more prominent player in Iraq,” he added.

“For the Iranians, Turkey's greater involvement in Iraq would represent a weakening of the line of resistance, which was formed in the Middle East after the 1979 revolution and, more specifically, in the wake of the Arab revolts,” he argued.

Duran went on to refer to Turkey’s current negotiations with the United States over the northern Syrian city of Manbij, which he said could lead to Ankara and Washington working together in Syria.

“When the Americans knock on Ankara's door to develop a comprehensive Iran strategy, it will be too late for Tehran. One cannot help but wonder if they will regret their greed then,” Duran wrote.

Ufuk Ulutas, the director for foreign policy at SETAV and a columnist for the pro-government daily Aksam, also pointed to increasing international pressures on Iran.

“Iran’s failure to respond positively to Turkey’s call for cooperation against the PKK points to strategic shallowness on the part of Tehran, to put it mildly, at a time when friendship toward Iran is becoming vague — while deepening enmity toward it is becoming operational,” Ulutas wrote in his column for Aksam.

Such a view clearly reflects the rancor felt toward Iran in Ankara, even if government officials refuse to reflect this openly for a number of reasons.

Pragmatism and a shared dislike of the West may impel Ankara and Tehran to maintain the appearance of good ties presently. Many expect, however, differences over Syria and Iraq to increase in time, because Turkey and Iran are ultimately on different sides of the Middle East’s active and growing sectarian fault line.

Iran’s discordant position on Turkey’s Afrin and Qandil operations also points to this.