Ankara claims it has Iran's support for the operation rolling out against the Kurdistan Workers Party in northern Iraq, but Tehran has yet to respond officially. 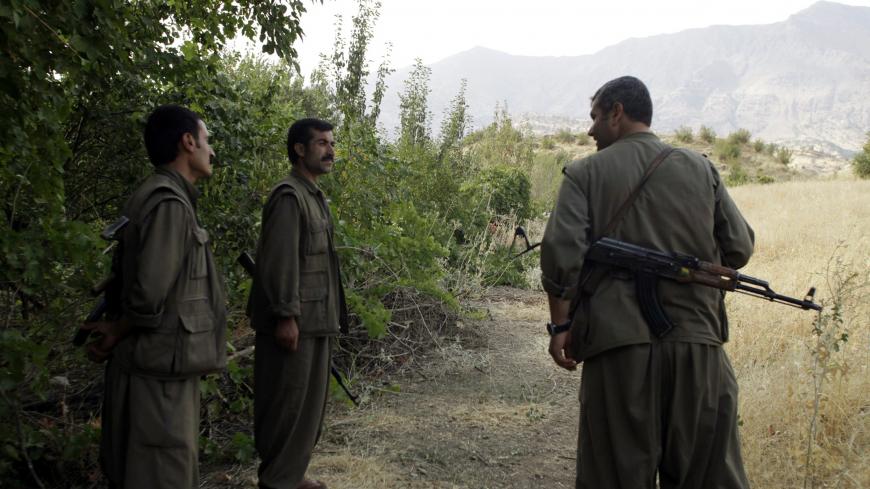 Turkey says Iran has offered verbal support for its latest offensive against Kurdistan Workers Party (PKK) rebels scattered across the forbidding Qandil Mountain range separating Iran from Iraq. Defense Minister Nurettin Canikli told the state-run Anadolu news agency in a wide-ranging interview today, “Our offer to Iran was to carry out the operation together. Iran, in its remarks at least, has voiced very important support.”

His comments came a day after Turkey’s President Recep Tayyip Erdogan declared that the operation against Qandil had started with 20 Turkish fighter jets destroying 14 PKK targets in the region.

In fact, a Turkish military operation against the PKK in Iraqi Kurdistan was already underway with Turkish troops deployed roughly 30 kilometers (nearly 20 miles) in the Harkurk region that falls northeast of Qandil. But “the big one” — a full-scale assault presumably involving ground forces taking on the mountain bases proper — has yet to begin. There is widespread skepticism that conventional methods could work against the guerrillas, who have a wide network of hideouts buried in the bowels of the craggy mountain chain, prompting speculation that Turkey's bellicosity is more about vote-grabbing in the run-up to the June 24 polls. Many of their camps are mobile. And Qandil town, which is de facto administered by the PKK — a giant portrait of the imprisoned PKK leader Abdullah Ocalan stares from a mountain face at its entrance — is populated with hundreds of civilians.

Canikli told Anadolu that the PKK was using these civilians as human shields. “Qandil and the entire region will be expunged of terror … including villages because the terrorists live together with the villagers; this is their strategy. … Naturally we will carry out our operations without harming the civilian population. We are very experienced in this matter.” Turkish airstrikes have in fact caused civilian deaths over the years, provoking a local backlash. But the Iraqi Kurdish government, which relies heavily on Turkey to sell its oil, has for the most part held its tongue.

Canikli said the Iraqi government was in full agreement with Turkey on an operation against Qandil. But a spokesman for Iraqi Prime Minister Haider al-Abadi disputed this claim, telling the Iraqi News Agency, “The Iraqi government will not accept any advance on its land by Turkish forces in pursuit of the PKK elements currently present in … Sinjar, Makhmour and the Qandil Mountains.”

Turkey has over 2,000 troops deployed in Kurdish-controlled northern Iraq, notionally to contain the PKK. But when it sent several hundred special forces to Bashiqa, near Mosul, in late 2015 to train Sunni fighters for the fight against the Islamic State (IS), Baghdad flipped. Talks to secure a Turkish withdrawal have come to naught.

Iran has yet to respond to Turkey’s assertions that it is on board. The country has a large and restive Kurdish population of its own and the PKK’s Iranian franchise, PJAK, has been growing in popularity, particularly among Shiite Kurds. Much like Ankara, Tehran is spooked by the United States’ support for the PKK-friendly Syrian Kurdish People’s Protections Units (YPG), which has drawn Iranian Kurds to its ranks.

Ceng Sagnic, who coordinates the Kurdish Studies program at Tel Aviv University’s Moshe Dayan Center, observed that Iran’s position has always remained ambiguous — tactically allying itself with the PKK to curb Turkish influence, but cooperating with Turkey against the rebels when it feels threatened by them itself. “Iranian neutrality, however, can be counted [as] support for Turkey in this instance, given that escape routes from Qandil to Iran require Iranian cooperation,” Sagnic told Al-Monitor.

Canikli suggested, however, that Turkey was looking for help against the PKK from different quarters. He said Ankara was in talks with all relevant countries regarding its plans and would remain in northern Iraq until “we wipe out the terror completely.”

One of those countries is the United States. The Pentagon has reportedly upped intelligence sharing on PKK targets in recent months, partly to offset Turkey’s fury over the US-led coalition’s arming and training of YPG forces in the battle against IS.

Bowing to Turkish demands, Washington also agreed to oversee the YPG’s withdrawal from the mainly Arab town of Manbij. A road map laying out a phased implementation of the plan was announced last week by Turkish Foreign Minister Mevlut Cavusoglu and US Secretary of State Mike Pompeo. Military officials from both sides are holding talks in Stuttgart, Germany, to hammer out details. Canikli maintained that US and Turkish forces would jointly oversee the YPG’s departure.

“There won’t be any ‘Look, we removed the YPG.’ Everything will be done together,” he said.