Although Turkey's military excursion into northern Iraq could be an electoral stunt by Turkish President Recep Tayyip Erdogan, an expanded operation into Qandil Mountains could become a quagmire for Erdogan and pose great risks for regional stability. 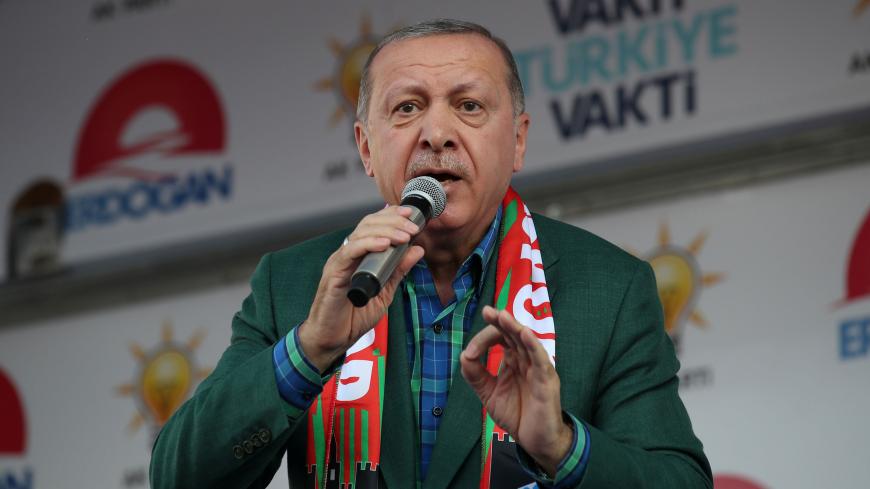 "If the occupying enemy sleeps even one night comfortably … we won’t accept that," Adasa Janwelat, a young female sniper from Afrin said May 20 as she prepared to go into battle alongside other fighters of the Kurdistan Workers Party (PKK) against units of the Turkish army, which has occupied a large swath of territory in the Sidakan area in northern Iraq.

"After kicking out the Turkish army from south Kurdistan [Iraq], I will go to Afrin and fight against the occupying forces there." Two weeks later, on June 3, a website close to the PKK released a video, which showed the group's snipers observing Turkish soldiers on peaks in the Sidakan area through their binoculars and shooting five of them dead.

The Sidakan area is an inaccessible triangle with spectacular high peaks, rocky and precipitous gorges and rivers flowing between Iraq, Iran and Turkey. It has served as the perfect corridor for PKK fighters to cross into Turkey and attack the security forces. Since July 2015, when a 2½-year cease-fire collapsed between the government and the PKK, President Recep Tayyip Erdogan has undertaken a crusade against the group in Iraq and Turkey and its affiliated groups in Syria.

Erdogan feels emboldened — especially after wresting control of Afrin from the US-backed People's Protection Units (YPG) in March, which was followed by PKK fighters' withdrawal from Sinjar and more recently the YPG's withdrawal from Manbij. But the tenacity of the PKK and its ferocity in fighting its enemies — be they the Turkish army or other Kurdish groups — show that if Erdogan indeed attacks Qandil, which is very unlikely, he should expect a bloody and long war with serious consequences for the stability of the region and Iraqi Kurdistan. While Turkish firepower appears to have been fairly effective in the flatlands and hills of northern Syria, the highlands of northern Iraq are a different story and could become a death trap for any ground invasion by the Turkish army.

In fact, PKK leader Abdullah Ocalan chose the Sidakan mountain range in northern Iraq in 1982-83 because the vast rugged region was a perfect training ground, a hiding place for a guerrilla force and an easy-to-defend location. The PKK was based in Syria and the Bekaa Valley in Lebanon in the early 1980s. But the regional conflict between Palestinian groups backed by Syria and Iran against Israel complicated the picture, so the PKK leadership looked for an alternative location.

After successful negotiations with Massoud Barzani, the head of the Kurdistan Democratic Party (KDP), whose peshmerga fighters were roaming around Sidakan fighting the Iraqi army, Ocalan was given permission to relocate his fighters to the area. Some flew to Tehran and crossed the border into Sidakan, others trekked across the mountains from Syria to reach the safety of their new base in freezing temperatures. The KDP was in alliance with Tehran at the time and the ayatollahs saw no issue in allowing yet another insurgent group to be located near their borders so long as the barrels of their guns were not directed at Tehran.

Two years later, the PKK staged its first attack inside Turkey and since then it has been the main thorn in the side of the Turkish state. The PKK appealed to the lower classes of the Kurdish society in southeast Turkey and the state played right into the PKK's hands by intensifying the collective persecution of the Kurdish community through imposing emergency rule and placing arbitrary bans on Kurdish culture (especially the Kurdish language) because they "undermined the national culture."

Turkey has even launched several cross-border operations against the PKK in northern Iran and backed the Patriotic Union of Kurdistan (PUK) and the KDP to fight the group in the 1990s. Now, 36 years after the first of PKK militants arrived in the Lolan Camp in Sidakan, hundreds of Turkish commandos and soldiers have entered the region in their shiny armored vehicles aiming to deny the guerrillas access to Turkey by building permanent outposts and finally rooting out the group from Qandil in a final push. A bloody war is already underway.

But on top of the harsh terrain, there are other challenges ahead for Erdogan and his army. While the US government supports Ankara against the PKK by providing intelligence, it is not clear if Washington is prepared to accept the possibility of large-scale instability in northern Iraq as a result of the all-out attack on Qandil.

Iran, too, has a dubious position on the PKK in northern Iraq. Until early 1996, Qandil was the main base of an Iranian opposition group, the Kurdistan Democratic Party of Iran (KDPI). However, the Islamic Revolutionary Guard Corps (IRGC) shelled the area nonstop and because KDPI fighters had families and children, they were forced out of Qandil into Sulaimaniyah province. Then, groups of PKK guerrillas arrived in Qandil and turned it into their mountain hideout.

The dynamics of power have changed in the Kurdistan region as well. The Kurdistan Regional Government (KRG) officially is in charge of the north of Iraq, but in reality the two ruling parties — the PUK and the KDP — have their own separate security policies. The Sidakan area is under the control of the KDP, which has cordial relations with Ankara and tense relations with the PKK. However, the Qandil Mountains are in Sulaimaniyah province, where the PKK's influence has increased considerably in recent years due to the PKK's defense of Kirkuk alongside peshmerga forces when the Islamic State (IS) attacked in the summer of 2014 as well as its battle against IS in Sinjar in support of the Yazidi community. Relations between the Sulaimaniyah administration of the PUK and Ankara have deteriorated since August, when the PKK seized two senior Turkish intelligence officials in the province. Recently the Turkish foreign minister went as far as accusing a group within the PUK of assisting the PKK.

The Turkish presence in Sidakan does not seem to have stopped PKK attacks inside the country and has led to several protests across Iraqi Kurdistan. Farmers in the Sidakan area are also complaining about not being allowed to cultivate their land or look after their orchards. Several locals have been killed in Turkish drone strikes in recent months, causing outrage and creating resentment toward Ankara. The central government in Baghdad says it is opposed to the Turkish incursion into Iraqi territory while emphasizing that Iraqi territory should not be used as a staging ground for attacks on Iraq's neighbors.

While Turkey maintains that Iran has given the green light for the attack on the PKK, a spokesperson for the Iranian armed forces, Gen. Abolfazl Shekarchi, said June 14 that this was inaccurate: "While Iran supports any counterterrorism measures, deploying forces into the territory of a third country on the pretext of fighting terrorism, without permission from the existing legal government of that country, is considered illegal."