Turkey insists on exclusion of Kurdish forces from Raqqa battle

Washington prefers to work with the Kurds to oust the Islamic State from Raqqa, but it still wants to keep Turkey involved. 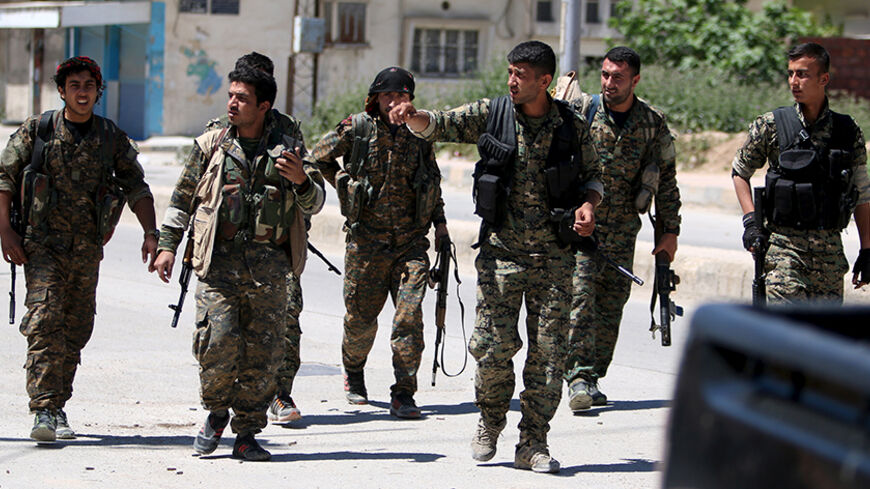 Kurdish fighters from the People's Protection Units walk along a street in the southeast of Qamishli, Syria, April 22, 2016. - REUTERS/Rodi Said

A short time ago, Prime Minister Binali Yildirim clearly declared Turkey’s condition to join the Raqqa operation in Syria: “If the YPG [People's Protection Units] will be there, we won’t be.”

When the Kurds under the umbrella of the Syrian Democratic Forces (SDF) assumed de facto leadership of Operation Euphrates Wrath, Turkey was once again sidelined. But the United States wants Turkey to remain engaged with the Raqqa operation, and assigned Ankara the role of finding the power that will govern Raqqa after its liberation.

Last summer, Turkey had proposed a joint operation with the United States that excluded the SDF led by the YPG, and it has now set its red lines for Operation Euphrates Wrath, which is the same as it was with Manbij: “The YPG will not enter Raqqa.”

Despite Turkey’s strong rhetoric, the YPG continues to be an integral part, actually the backbone, of the international coalition. However, according to YPG Commander Sipan Hemo, the option of the Kurds controlling Raqqa was never on the table in discussions with the YPG.

In the first phase of the offensive, the SDF will surround Raqqa from three directions. A new plan will be made when it is time to enter the city in the second phase. The Raqqa Military Council is made up of the city’s inhabitants; the Kurds have no intention of staying in Raqqa. In a meeting in Ankara with Gen. Hulusi Akar, US Gen. Joe Dunford acknowledged that a new force will be prepared for the second phase.

The right force for that operation means an army made up of Arabs along the lines of the train-and-equip program the United States wanted to implement against the Syrian regime.

The Turkish government is insisting that the Kurds are determined to hold on to Raqqa. But from the outset, the Kurds have been saying that even if the Islamic State (IS) is defeated in Raqqa, it would be too risky for the YPG to remain in the town. The Kurds are acutely aware that an Arab-Kurdish war could ignite if they stay on in the Arab-dominated town. You don’t have to be an expert to know that the people of Raqqa will not accept a “Kurdish ruler” running their lives.

Dunford tried to reassure Turkey by saying, “We always knew that the SDF wasn’t the solution for holding and governing Raqqa. What we are working on right now is finding the right mix of forces for the operation.”

He wasn’t completely dismissing a Kurdish perspective for Raqqa — the United States knows the participation of local elements, mostly tribes, is essential, because the SDF can’t handle it alone.

The basic problem now is that, although the SDF has emerged as an organized and mobile force thanks to the YPG contributions, the Arab elements of the force have not reached the competence levels desired by the United States, and Raqqa needs a larger Arab force.

The United States tried to see if the experience gained in Iraq when organizing tribes against al-Qaeda would also work in Syria. So far nothing positive has come from its probes.

There are some organizations that could be recruited to expand the Arab force, but they come with different sets of problems. Because of their target choices and their own agendas and reservations, they cannot be included in the SDF mix. These organizations with Islamic doctrines may be the enemies of IS, but they demand that if they are going to join the US-led force, the United States must first declare the Syrian regime as the priority target. Also these groups are either in touch with al-Qaeda or are in its periphery. These groups categorically reject partnership with the YPG, as they see it as a Marxist outfit.

The US administration will either have to make do with a few more groups joining the SDF that will be led by the YPG or revert to the unsuccessful train-and-equip project with Turkey.

If the Americans really promised Ankara that the YPG would not enter Raqqa, it will do well to remember the tactics at Manbij. Since October 2014, several formulas have been devised to soothe Turkey over Manbij, and they appear to have worked.

Turkey’s warning about not giving weapons to the YPG was bypassed by the United States saying those guns were for the SDF. When Turkey warned that the YPG could not cross to the west of the Euphrates, the United States overcame it by having the YPG cross the river from the south in SDF uniforms and saying that the YPG would liberate Manbij, but would not enter the town.

It will take a miracle for the United States to put together a credible Arab army to liberate Raqqa. This simply means that the Manbij rules of engagement will also apply to Raqqa.

This was thus another crossing of Turkey’s red lines. Turkey had some expectations while trying to keep the SDF out of the Raqqa operation. Ankara was hoping to send in Turkey-supported Syrian opposition groups to al-Bab after Jarablus and al-Rai and put an end to aspirations for a Kurdish corridor from Kobani to Afrin. Meanwhile, Russia turned on the red light to Turkey’s entry to al-Bab. An American official told news agencies that Russia had warned Turkey to not move farther than 25 kilometers (15.5 miles) in Syria. This is why the Turkey-supported groups that had gone in 30 kilometers (18.6 miles) had to halt.

Turkey couldn’t play its cards at Mosul. Instead, it massed its troops in Silopi at the border. At least in the first phase of the Raqqa operation, Turkey was left on the outside. Ankara is aware that the United States has several objectives in the Raqqa operation: not to upset Turkey, to prevent Ankara from becoming a game spoiler in Syria and, of course, to keep the Incirlik Air Base open to coalition air forces.

Turkey already had embarrassing disappointments in achieving its demands at Manbij, and it will be much more difficult for Turkey to achieve its goals in Raqqa.