A look at battle for Raqqa from a Kurdish perspective

A YPG commander told Al-Monitor in an interview that Kurdish militias will help the Syrian Democratic Forces liberate Raqqa but won’t remain in the city after the Islamic State is expelled. 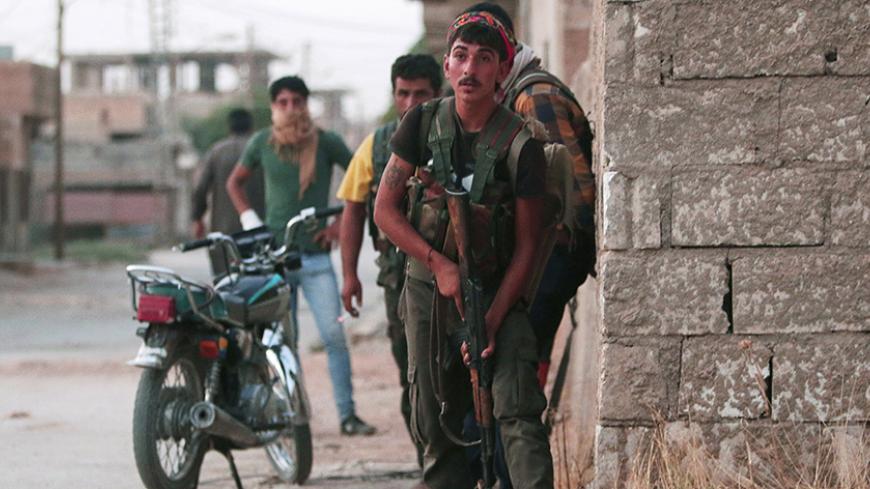 Kurdish fighters from the People's Protection Units (YPG) carry their weapons as they take position in the northeastern city of Hasakah, Syria, Aug. 20, 2016. - REUTERS/Rodi Said

Following the operation launched to liberate Mosul from the Islamic State for Iraq and Syria, an expedited operation code-named Wrath of the Euphrates was initiated to liberate the IS stronghold of Raqqa in Syria. Ankara has been perceptibly upset since it became known that the Raqqa operation was initiated by the Kurdish-led Syrian Democratic Forces despite earlier optimistic predictions that Ankara, which was sidelined from the Mosul operation, would be in partnership with the United States at Raqqa.

Turkey's only condition was that the Kurdish People's Protection Units (YPG) be excluded from the SDF. But the United States, which could not implement its plans to form an Arab-dominated army made up of tribes and so-called moderate opposition forces, had no choice but to rely heavily on the Kurds. What are the conditions for the Kurds to participate in the Raqqa operation? What kind of an operation is planned? Who will govern Raqqa once the dust settles?

Al-Monitor asked these fundamental questions to the YPG General Commander Sipan Hemo. According to Hemo, Kurds are cooperating with the coalition in the Raqqa operation. He said, “Preparations have been going on for two months. All units under the SDF are participating. In addition to the YPG/YPJ [the women's contingent], there are Liwa Suqour al-Sunna in Raqq, Liwa al-Tahrir, Liwa Shoheda al-Raqqa, Hammam al-Turkman Martyrs Brigade, Liwa Ahrar al-Raqqa, Liwa Thuwar Tell Abyad and the Syriac Military Council taking part. In the first phase, Raqqa will be encircled from the north, east and west. This operation should not take long. Once we reach the Euphrates River in the first phase, then a second phase will be planned against the town center. From the experience gained at Manbij, where the operation lasted 73 days, we know the liberation of Raqqa's center will take time.”

Hemo added, “The plan for the liberation and then administration of Raqqa will not be different from Manbij. Actually, the role of local forces will be more pronounced at Raqqa. The policy of assisting in the liberation of Arab-dominated areas and then handing over control to a local assembly won’t change. The Raqqa Military Council is made up of exclusively of people from Raqqa. The Kurds have no goal of remaining in Raqqa. The Kurds will not come from Qamishli, Kobani and Hasakah to run Raqqa. There is no intention of having Raqqa join the Rojava Northern Syria Democratic Federation. The people of Raqqa will decide their future themselves.”

Of course, the next question had to be on the Russian and Syrian positions. Has there been any reaction from them, or is there a possible coordination in the offing? Hemo was clear in denying any linkage or coordination with Russia and the Syrian regime. He said, “They are not in a position to react while the war in Aleppo rages. They may see the SDF’s entry to Raqqa with the international coalition support as an inevitable opportunistic move.”

With Turkey's Operation Euphrates Shield came Ankara’s stern warnings for the SDF to leave Manbij while putting military pressure on Kurdish-controlled Afrin and Tell Abyad. There are some among the Kurds who feel that transfer of Kurdish forces from Rojava toward Raqqa may leave Kurdish areas vulnerable.

When asked if they expect an offensive move from Turkey and what the Kurdish reaction would be if this happened, Hemo said: “We don’t want to be seen provoking Turkey. We are at war against [IS] in our own country. This is not an anti-Turkey operation. It doesn’t threaten Turkey. We were expecting understanding from Ankara. Instead we got hostility. We will continue with our operation. I want to underline that we have never been a threat to Turkey. This policy will not change. We see its intervention in Syria as an occupation move. Not only the Kurds but all the parties in Syria consider Turkey’s military presence in Syria an occupation. Our position on this clear. We see it as a hostile move. What we are doing now is about Syria, not Turkey. We have enough forces for the Raqqa operation and to defend Rojava at the same time. There is no question of vulnerability.”

Of course, one wonders if the United States had reassured the Kurds that Turkey will not move against Rojava. Hemo emphatically denied any US guarantee, adding, “But from the outset in all operations at Kobani, Shadi, Tell Abyad and Manbij we worked with the coalition and liberated those places with the support of the coalition. Naturally that means the coalition has a responsibility to defend these locations against other forces.”

The United States seems to have given some guarantees to Turkey. According to reports about the recent Ankara meeting of US Chairman of Joint Chiefs of Staff Gen. Joe Dunford and his Turkish counterpart Gen. Hulusi Akar, the United States promised to work with Turkey. After their meeting, Dunford said, “The coalition and Turkey will work together on the long-term plan for seizing, holding and governing Raqqa.”

Dunford believes the siege of Raqqa may take months. As the operation continues, the United States will continue contacts with Turkey and other partners to determine who will govern Raqqa after its liberation.

A Pentagon transcript shows Dunford touching on the US-backed SDF operation “Wrath of the Euphrates” and saying, “We always knew that the SDF wasn’t the solution for holding and governing Raqqa. What we are working on right now is finding the right mix of forces for the operation.”

According to Turkish sources, Dunford said during the meeting that the Raqqa operation needs the Free Syrian Army, which Turkey backs. He said it needs “a predominantly Arab and Sunni Arab force," also saying, "There is the moderate Syrian opposition, the vetted Syrian forces and the FSA forces, and there is some initial outreach to forces in Raqqa proper.”

Meanwhile, Turkey’s Foreign Minister Mevlut Cavusoglu said Washington has told Ankara that the YPG would only take part in the battle for Raqqa and not enter the city. He added that weeks remain until the Raqqa offensive is kicked off. “We hope [the Americans] will keep their promise,” he said, adding that Turkey is nevertheless “taking measures” after its partners did not keep promises regarding the Syrian city of Manbij, from which Ankara has repeatedly demanded the YPG withdraw.

In a nutshell, Ankara has been promised that its proposals will be taken into account while determining the new forces to participate in the second phase of the Raqqa operation. But is it an effort to appease an ally or an open-ended proposal for partnership?