The Obama administration’s no-boots-on-the-ground policy in Iraq and Syria has forced it to employ creative solutions to manage the complex battlefield. But for how long? 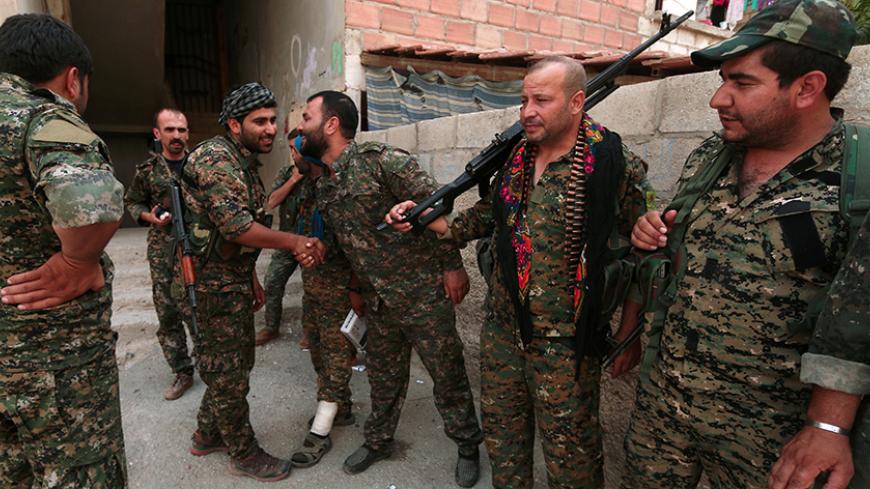 Kurdish fighters from the People's Protection Units (YPG) greet each other in the northeastern city of Hasakah, Syria, Aug. 21, 2016. - REUTERS/Rodi Said

The Obama administration has remained determined not to deploy regular land forces in the conflicts in Iraq and Syria, forcing the Pentagon to work out creative solutions in a battlefield that is growing more complicated, more crowded and more entangled by the day. The most remarkable of those solutions recently has been the use of the American flag, very much in the way a maestro would use his baton to prevent a cacophonic band from descending into full chaos.

The United States had to put this motley band together to advance its political agenda, which, in Syria, is topped by the priority to degrade and destroy the Islamic State (IS). The “musicians” who produce the cacophony, however, have their own agenda and political objectives. And who are they?

First, there are the Kurdish Democratic Union Party (PYD) and its armed wing, the People’s Protection Units (YPG). True, they are fighting IS, but they are doing so in the hope of obtaining an “autonomous Kurdistan” at the least.

Then, there is President Recep Tayyip Erdogan’s Turkey. True, Turkey has finally begun to fight IS, but Erdogan’s essential goal in rolling tanks into Syria and pushing IS to the south is less to degrade and destroy IS and more to prevent the Kurds from securing territorial contiguity and ultimately autonomy in Syria. He might also believe that thanks to Operation Euphrates Shield, he has regained a place for himself in the Syrian equation after being shut out by Russia’s intervention last year.

Finally, there is the Free Syrian Army (FSA), the name given to a bunch of anti-regime jihadi groups. Which factions precisely make up the FSA and by what nuances they differ from each other is a matter of field expertise, which only a small community of experts and intelligence officers command. And because the factions are in a perpetual process of breaking up, merging and rebranding, the FSA remains the most convenient label to describe them. According to the US State Department, the FSA members are “moderate Islamists.” Obviously, the FSA is also fighting IS in northern Syria, but a better description perhaps is that they are fielded to fight IS by those who nurture and equip them. The FSA groups that Ankara has engaged in Operation Euphrates Shield are said to have US approval and CIA support.

So these are the so-called US allies against IS, for which the Pentagon is using the American flag — sometimes to prevent them from destroying each other and sometimes to protect them against the attacks of non-allies.

An intriguing episode of the Pentagon’s “flag solution” unfolded Sept. 15 in Tell Abyad, the Syrian border town facing Akcakale on the Turkish side. Watching from Akcakale, observers noticed that PYD banners on some roofs and positions were replaced with American flags, which was initially interpreted as a sign that the PYD feared a Turkish military intervention and sought to deter it by flying the US flag. Two days later, however, it turned out that US special forces based in Tell Abyad had hoisted the flags. A senior Pentagon official told Hurriyet that the special forces had raised the flag in line with the Geneva Convention to declare their positions, and that immediately afterward fire was opened in their direction from the Turkish side. There were no casualties.

The YPG had wrestled Tell Abyad from IS in June 2015, reducing significantly IS control along the border, which became limited to the 95-kilometer (60-mile) stretch between Azaz and Jarablus. Both the PYD and the United States were happy, but for different reasons. The Americans were pleased that IS had been weakened, while the Kurds were happy to have linked territorially their cantons on either side of Tell Abyad.

The US flags were a clear message from Washington to Ankara: “We are here. If you have any plans to capture Tell Abyad and separate the cantons, please review them.” When the Pentagon feels the need to hoist the US flag as a way of disciplining quarreling allies, the task is, of course, up to US soldiers on the ground. The troops in Tell Abyad were special operations forces, whose mission is not to fight on the front lines but to help those who do.

In a similar incident in August, when clashes broke out between the YPG and regime forces in Hasakah, the Pentagon used the presence of US special forces there as a pretext to shield its Kurdish allies against Syrian airstrikes, warning Damascus to keep its jets away from the area.

In the coming days, the US special forces could again take the Stars and Stripes out from their backpacks and fly them to protect allies. The Pentagon’s exercise of hoisting the flag to steer the war on the ground could this time be prompted by the al-Bab stage of Ankara’s Operation Euphrates Shield, which has been afoot since Aug. 23.

Having ejected IS from the Azaz-Jarablus line, the FSA groups, advancing under the cover of Turkish tanks and special forces, were expected to move southward from al-Rai to take also the IS-held strategic city of al-Bab. But just then, an intriguing video hit the internet Sept. 16. The footage showed FSA members shouting hostile slogans, including death threats, at about 30 US special forces, who had arrived with armed off-road vehicles in al-Rai to back Euphrates Shield.

One reason for this protest, which forced the Americans to leave al-Rai, was the support the United States provides to its other ally against IS, the YPG. A contradiction that still begged explanation, however, was the claim that those FSA elements had been vetted by the United States, presumed to be “moderate Islamists,” and were seen brandishing American weapons in various videos. The matter seemed to be settled when three FSA factions opposed to US involvement in Euphrates Shield pulled out from the operation and the booed US soldiers returned to al-Rai.

Whether the undisclosed parts of the latest US-Russia deal draw any boundaries for Operation Euphrates Shield remained unknown at the time this article was written. Yet if the operation expands toward al-Bab as expected and FSA units come under any regime threat, the United States is likely to do what it did in Hasakah — hoist the American flag to say “We have soldiers there” as a means of warning Damascus and protecting the FSA fighters.

By drawing Turkey into the battlefield, the United States appears to have increased the number and strength of its allies on the ground, but this combination of allies is so complicated and explosive that it requires an utterly superior genius to manage. It’s already well known that the US-backed “moderate Islamist” FSA elements are actually no friends of the United States. Yet they are friends of Ankara, another US ally in the field. And in Ankara’s eyes, Washington’s third ally, the PYD, is an enemy. The FSA is also hostile to the PYD, and if Ankara’s enmity is one reason for that, the others are the PYD’s secular worldview and its perceived collaboration with the Damascus regime.

This cacophonic band of allies brings to mind the town musicians of Bremen. It’s a bizarre ensemble in which the burliest member, the United States, has assumed the role of the rooster at the top due to its no-boots-on-the-ground policy. The rooster is able to manage the situation for the time being. So far so good — of course, as long as the donkey doesn’t kick and the dog and the cat don’t get to fight each other.