Turkey seeks more military cooperation with US in Syria

Analysts who say the FSA is not a viable force against IS argue that the Turkish military needs the help of US forces as it prepares to move on the IS stronghold of al-Bab. 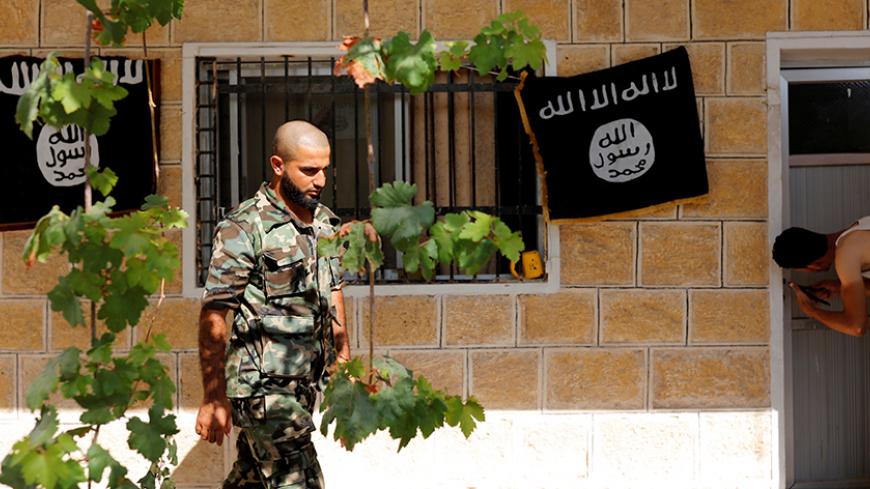 A member of the Turkish-backed Free Syrian Army, seen with Islamic State flags in the background, walks outside a building in the border town of Jarablus, Syria, Aug. 31, 2016. - REUTERS/Umit Bektas

Having cleared the Islamic State (IS) from its border with Syria by leading groups of the Free Syrian Army (FSA), Turkey is now preparing for the next phase of its Euphrates Shield operation, which involves moving south against the IS stronghold of al-Bab.

Turkish military planners were encouraged by the success of wresting the towns of Jarablus and al-Rai from IS with minimum clashes and casualties, but are aware that liberating al-Bab will be a tougher nut to crack and will require cooperation with US forces on the ground and in the air.

The fact that such cooperation is already underway was highlighted last week when certain elements under the FSA banner protested the presence of US special forces embedded with Turkish forces in the town of al-Rai (Cobanbey in Turkish).

Video footage shows protesters calling the US soldiers “dogs and pigs” and shouting “Christians and Americans have no place among us.” The incident is embarrassing for Turkey because it has been arguing that the FSA is made up of “moderate Islamic forces,” which wasn’t the impression given by the protesters.

The US soldiers, whose numbers were said to be around 30, initially retreated but came back later after the Turkish military intervened on their behalf. Annoyed with their return, some of the protesting groups withdrew from the FSA, and according to some accounts, went to join Jabhat al-Nusra, which recently changed its name to Jabhat Fatah al-Sham. This group is designated by Washington and Ankara as a terrorist organization.

The Turkish military said in a statement after the incident that US forces attached to the anti-IS coalition had assisted Turkish forces in operations conducted between Azaz and al-Rai in northern Syria.

The state-owned Anadolu News Agency quoted Pentagon spokesman Capt. Jeff Davis saying that the request for the US special forces had come from Turkey. “US personnel operating with Turkish forces and Syrian opposition forces will provide the same train, advise and assist support they have been providing to other local partners in Syria fighting [IS],” Davis said.

President Recep Tayyip Erdogan, however, blamed the United States over the incident at al-Rai.

"The [US] special forces were not wanted by the FSA. The US authorities' approach toward the FSA pushed the process in this direction,” Erdogan told reporters in Istanbul before flying to New York for the UN General Assembly meeting.

His remarks, which suggested sympathy for the protesters and overlooked the fact that most groups in the FSA also get military assistance from the US, are unlikely to have gone down well in Washington. Turkey and the United States are already at odds over US-support for the Democratic Union Party (PYD) of the Syrian Kurds and its armed wing, the People's Protection Units (YPG).

Ankara says the PYD and the YPG are terrorist organizations linked to the outlawed Kurdistan Workers Party (PKK). It is nevertheless clear that Turkey will depend on US support as it pushes south toward al-Bab.

Erdogan also remains keen on establishing a “safe zone” in the region. "As part of the Euphrates Shield operation, an area of 900 square kilometers [some 350 square miles] has been cleared of terror so far. This area is pushing south," he said. "We may extend this area to 5,000 square kilometers as part of a safe zone."

The United States, however, remains cool toward the idea of such a zone. Military analysts say Turkey cannot secure such a zone on its own. Nihat Ali Ozcan of the Ankara-based Economic Policy Research Foundation told Bloomberg that Erdogan’s vision would “require deployment of thousands of Turkish soldiers in Syria for several years.”

This is something that Ankara is neither prepared for nor capable of doing. Turkey can’t move toward al-Bab without US support either, according to retired Brig. Gen Naim Baburoglu.

“This is why it requested US forces in al-Rai,” he told Al Monitor. “The operation for al-Bab is fraught with risks. It will most likely have a high cost in lives. IS will resist with heavy artillery, including with those it brought from Jarablus before Turkish forces and the FSA took back the town,” Baburoglu said.

He added that the FSA — “which is nothing without Turkey’s support” — could not be relied on as a viable force against IS in al-Bab. Reminded that the US-supported Syrian Democratic Forces (SDF), comprised mostly of YPG fighters, has also expressed its determination to capture al-Bab before Turkish forces and the FSA get there, Baburoglu said he did not believe the United States was keen to see the YPG in al-Bab.

“The US is happy so far about Turkey’s military operation in Syria. It has done nothing to harm its interests. The chances of a confrontation between the YPG and the Turkish military has also been significantly diminished,” Baburoglu said. He added that another reason why Turkey wants US forces to be embedded with its own forces in Syria is to prevent attacks by the YPG against the Turkish military.

Baburoglu also suggested that Turkey, in what appears a quid pro quo for support in al-Bab, has given up on trying to get YPG forces to leave Manbij — the strategic town liberated from IS by the SDF earlier this summer — even though this was one of Ankara’s strong demands until recently.

Ozcan Tikit, a commentator for the daily Haberturk, also believes moving on Manbij to clear it of YPG fighters could be counterproductive for Turkey, given that it is clear at this stage that the United States will not give up on its support for this group, which also enjoys a degree of support from Russia.

“If fighters supported by Turkey were to move toward Manbij, the international support that Euphrates Shield has received could drop,” Tikit wrote, also suggesting that concentrating on liberating al-Bab was more crucial now because this would clear the path to Aleppo, a much more strategic target for Turkey and its allies.

Not everyone in Turkey, however, is happy to see increased cooperation between Turkish and US forces in Syria. Ibrahim Karagul, the editor-in-chief of the Islamist daily Yeni Safak, argued that operation Euphrates Shield “should not be made a hostage to the US.”

Karagul said every US intervention in the region over the past 25 years has worked against Turkey’s interests and brought chaos “step by step” to its borders. “While fighting IS, or being pushed into this fight, Turkey must not fall into the trap of those who are trying to open space for the PKK/PYD,” Karagul said.

Reflecting a gradual change of view regarding Syrian President Bashar al-Assad among some Turkish Islamists, Karagul also recommended more cooperation between Ankara and Damascus. “Turkey should distance itself from getting stuck on Assad, and encourage groups that it has influence over for a solution [to the Syrian] crisis,” he said, suggesting the United States was the real enemy.