Will Turkey be dragged deeper into Syria?

US military support for Kurdish forces pulled Turkey into Syria, but the IS factor will now determine whether or not Turkey gets bogged down. 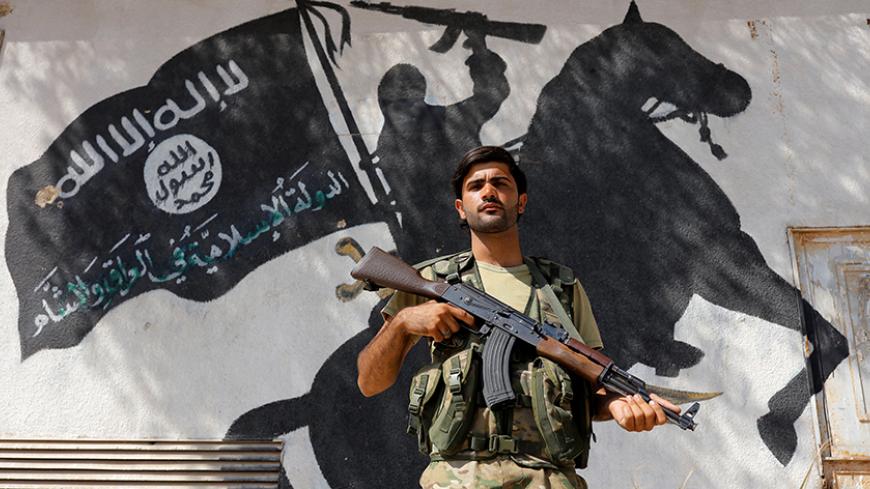 A member of the Turkish-backed Free Syrian Army, seen with a mural of the Islamic State in the background, stands guard in front of a building in the border town of Jarablus, Syria, Aug. 31, 2016. - REUTERS/Umit Bektas

The main determinant for Turkey’s Operation Euphrates Shield in Syria, launched Aug. 23 in cooperation with Ankara-sponsored jihadi groups, was not the threat posed by the Islamic State (IS). Rather, it was the US support for the Kurdish Democratic Union Party (PYD), which Ankara sees as an offshoot of the Kurdistan Workers Party (PKK). Without American support, the PYD’s armed wing, the People’s Protection Units (YPG), would have failed to cross to the western side of the Euphrates to wrest Manbij from IS, and therefore the prospect of a “Kurdish corridor” from Afrin to Kobani would not have emerged to give Ankara sleepless nights. Turkey would not have been forced to send its troops to Syria, something it had long refused to do.

Ankara had favored IS over the PYD as its neighbor on the border, but the Unites States’ alliance with the PYD against IS came as a dramatic shift of circumstances that ultimately pushed Ankara to fight IS in earnest. And while this article was penned, news broke that the operation’s stated objective had been achieved — the Turkish forces and their allies, advancing both from the east and the west of the 90-kilometer (56-mile) border stretch between Azaz and Jarablus, had linked up on the 12th day of the operation, cleansing the entire border from IS.

How Turkey’s intervention will proceed from now on is something that all regional actors must be curious about.

That a de facto “safe zone” is being created along the Azaz-Jarablus line is obvious. But how is this zone going to be secured as long as the IS threat, coupled with the prospect of a war of attrition, persists? Will the Turkish troops be forced to advance deeper toward al-Bab, down a corridor sandwiched between regime-held areas to the west and YPG-controlled areas to the east?

For Turkey, the Euphrates Shield’s main weakness is the shortcomings of the jihadi groups it has patched together under the Free Syrian Army (FSA) label. The resistance IS put up at al-Rai, halfway between Azaz and Jarablus, made it clear that those groups can hardly advance on the battlefield without close support from Turkish armored units. The Sept. 2 reports that IS recaptured four villages from the FSA at al-Rai were followed by Turkish armored units entering Syria from the same area and opening a second front the very next day. This timing was hardly a coincidence.

What happened at al-Rai is perhaps a small-scale model of how the Turkish military could be sucked in deeper into Syria. Moving farther south and with more troops to prop up the FSA each time it stumbles, the Turkish military could ultimately confront the Syrian, the YPG, the Hezbollah or the Russian factors, or several of them or even all of them simultaneously. This raises also the specter of Turkey bogging down in “the Syrian quagmire.” If the Turkish military finds itself caught in an inextricable war of attrition one day — and this is perfectly possible — proclaiming Turkey as “stuck in a quagmire” would become inevitable.

The day the Turkish military and its allies took control of the entire Azaz-Jarablus line, Aleppo’s rebel-held section fell back under the siege of regime forces, which could have been a coincidence only.

Yet there is no coincidence to the fact that Damascus’ allies Russia and Iran have raised objections only to Turkey’s attacks on the YPG in Manbij, while keeping silent on its operations in IS-held areas. This is a strong sign of a deal between the parties to let Turkish forces enter Syria to eject IS from border areas in return for handing Aleppo to the regime.

But the Turkish forces might fail at consolidating their line amid ongoing FSA shortcomings and IS threats. Such instability, in turn, could make Turkey’s deal with the other actors on the ground unsustainable.

Then, if the possibility of a Turkish push farther south to eliminate a persisting IS threat materializes, this would give Turkey a greater say over Syria’s future through the leverage of Aleppo, which its troops would be approaching from the east. It might even lead some in Ankara to start dreaming of conquests again.

We are faced with an intriguing paradox here: The main reason why the United States struck an alliance against IS with the PYD — the Syrian extension of the PKK, which Washington blacklists as a terrorist group — was Turkey’s persistent reluctance to fight IS, crack down on IS cells on its own territory and secure its border with Syria. So it was Turkey that forced the PYD alliance upon the United States, and then the US-PYD alliance forced Operation Euphrates Shield upon Turkey.

Now Turkey has entered Syria to remove the threat it perceives from the PYD, overriding the Kurdish group’s importance for the United States. As a result, Turkey is finally fighting IS. This, at first glance, might look like a highly favorable situation for US interests. Why bother to have the YPG against IS, after all, if the Turkish Armed Forces are there, still standing strong despite all the setbacks of the July 15 coup attempt? Yet things are not as they seem.

To start with, the United States and Turkey have very different priorities in Syria. The priority of the United States is to degrade and destroy IS, which makes the PYD not a problem but a solution. Turkey’s priority, on the other hand, is to stop the PYD’s expansion. So the United States cannot keep up the fight against IS relying on the Turkish military alone, for their underlying objectives diverge.

Relying on the Turkish military alone may lead to the collapse of Turkey’s tacit deal with Russia and Iran, confrontation with the Kurds and Turkey’s bogging down in a quagmire in Syria. It may ultimately make the war even more inextricable.

So if none of this is Washington’s intention, it is now faced with an extra liability — to make sure the Turkish troops fighting IS inside Syria at long last are not compelled to move deeper into Syria. In this context, cooperation with the YPG against IS becomes even more important than before, and the most likely prospect is that it will continue in harmony with new objectives.