Turkey has labeled Operation Euphrates Shield a "success" and put it to bed, leaving observers to wonder about the Turkish military's next ambitions. 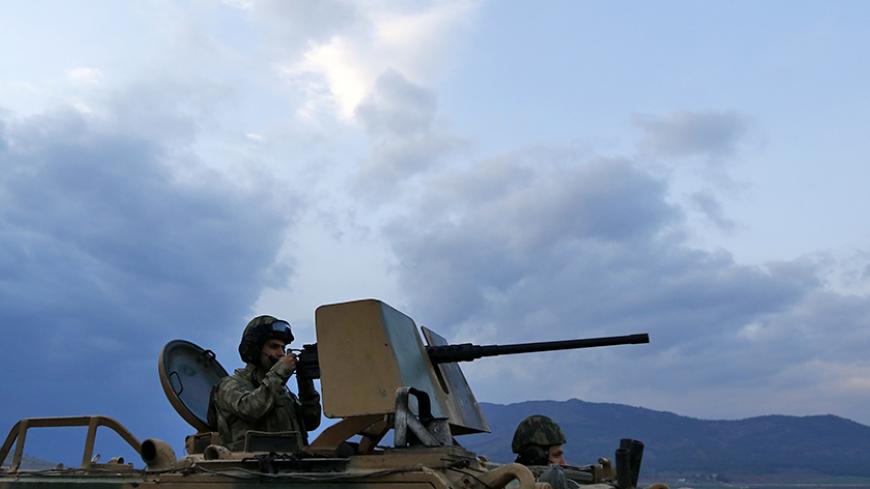 A Turkish soldier on an armored military vehicle surveys the border between Turkey and Syria, March 2, 2017. - REUTERS/Murad Sezer

Even as he was closing the door on Operation Euphrates Shield in Syria, Turkey's president threw open a window to potential new cross-border operations against anyone he considers terrorists, including — or perhaps especially — the Kurdistan Workers Party (PKK).

"There is no stopping; the road continues. We are making preparations for new operations in other regions for getting to the terrorists on their hills. We will give new names to the new operations," he said, according to a story published April 4 by The New Arab.

The Turkish military command said 67 soldiers were killed in the operation: 40% by suicide attacks with armored vehicles, 30% with mortar and rocket fire and 20% by roadside bombs. In addition, 220 soldiers were wounded. Free Syrian Army (FSA) groups supported by Turkey suffered 800 wounded, and 380 were killed. Turkish command said about 3,000 Islamic State [IS] militants were “neutralized."

The operation had three objectives, two of which were not stated. The only goal made public was to clear out IS from Jarablus and al-Rai, which was the group's only access to the outside world. This was achieved. An objective that wasn’t stated was to control the Azaz-Jarablus line to prevent the Kurds from linking Kobani and Jazeera cantons east of the Euphrates River with the Afrin canton west of the river, which would have formed an unbroken stretch of Kurdish territory. A glance at the field situation today indicates that this unstated goal was partially achieved. Another never-mentioned objective was to restore the morale of the Turkish army, rebuild the nation’s confidence in the army and to keep the army busy, away from the politics of Ankara.

Polls taken during the operation showed that the public’s support for the operation never dropped below 70%. There is no doubt that Operation Euphrates Shield helped the Turkish military recover its domestic public credibility, which had been badly eroded by the July 15 failed coup.

The operation was divided into phases: The first phase included capturing Jarablus and clearing the 34-mile border stretch from Jarablus west to al-Rai in just two months. But the operation lost momentum at the end of November when another phase, to seize al-Bab, began. Strong IS defenses caused significant problems for the Turkish army.

Actually, Operation Euphrates Shield truly ended at the beginning of March, when US Army Rangers at Manbij displayed their national flag, followed by Russian soldiers flying their flag at Afrin and the troops of Syrian President Bashar al-Assad imposing their control south of al-Bab, leaving Turkish forces with nowhere to go. At the end of the day, it will not be wrong to describe the operation as a "tactical success" story whose diplomatic phases toward the end were badly managed — although Turkey was able to return to the Syrian scene after restoring friendly ties. That is why, to encourage a public perception of the operation's overall success, Turkish news media have been overloaded with sagas of heroism of Turkish soldiers in the field.

There are five lessons Ankara has to learn from the operation:

An analysis of four different regions, two in Iraq and two in Syria, is necessary:

West of the Euphrates: It's not feasible for Turkey to conduct military operations in this area, which is now considered part of Russia's sphere of influence. The question then is whether Turkey will withdraw from the Jarablus/al-Rai/al-Bab triangle or try to consolidate its gains in this area. Field indicators show that Ankara wants to hold on to this triangle no matter the cost, as seen from a massive post-conflict reconstruction plan for this area. Some of the original inhabitants of Jarablus who had fled to Turkey have been returning to their homes since November.

Ankara hopes that in the first phase of that plan, about 10,000 Syrian refugees living in Turkey's Gaziantep and Kilis border provinces will be heading back to the triangle at the beginning of May.

What is not known yet is whether Russia will allow Turkey to consolidate its control of the triangle. The answer lies in Russia's plans for Idlib, which is currently under the control of Jabhat Fatah al-Sham (formerly Jabhat al-Nusra). If Russia applies the same iron-fisted policy it used in Aleppo, it will have to find a place for the Sunni opposition amassed at Idlib. Russia is seeking to assemble the Sunni armed opposition from all over Syria at Idlib, and then clear out Idlib. Russia might therefore allow these opposition fighters to move to the Jarablus/al-Rai/al-Bab triangle that Turkey controls. Russia has learned from Aleppo that Salafist jihadis without an escape route will fight to the end.

East of the Euphrates: This is part of the US sphere of influence, and the United States will rely on its own troops and the Syrian Democratic Forces, for which the Kurdish People's Protection Units (YPG) provides the backbone. Turkey, however, has three cards to play east of the Euphrates:

Iraq’s Sinjar: Turkey, which has lost its influence in Mosul, now only has Sinjar where it can display its prowess. Sinjar has strategic importance because of its location and the presence of the Yazidi Sinjar Resistance Units, led by the PKK, and the peshmerga of Iraqi Kurdistan President Massoud Barzani. Recent media reports indicate Turkey's military may take part in Sinjar clashes. Turkish Foreign Minister Mevlut Cavusoglu said Turkey will use a military option as long as the PKK remains at Sinjar.

Northern Iraq’s Zap and Hakurk areas: Ankara knows well that when the adversary is the PKK, public support for cross-border operations never drops below 70%. Ankara was able to persuade the public that Operation Euphrates Shield was a successful ongoing effort for nine months and avoided angry public reactions to Turkish casualties. Erdogan and his government know that the cross-border operations dilute criticism against them. In other words, launching an operation far from the interests of the United States and Russia that directly targets the PKK may yield plenty of benefits.

That is why it won’t come as a surprise if Turkey launches a medium-scale cross-border operation of, say, 10,000 troops with the support of Barzani's peshmerga against the PKK at Avasin-Basyan, Zap or Hakurk areas close to the Iraq-Turkey border.

Of course, opting for a new battlefront would clearly indicate Ankara has no interest in a new peace process with the Kurds for at least the next couple of years.