In run-up to referendum, Turks can say anything but 'no'

The Turkish ruling party's campaign to push through amendments to grant the president sweeping new powers is having absurd and sobering consequences. 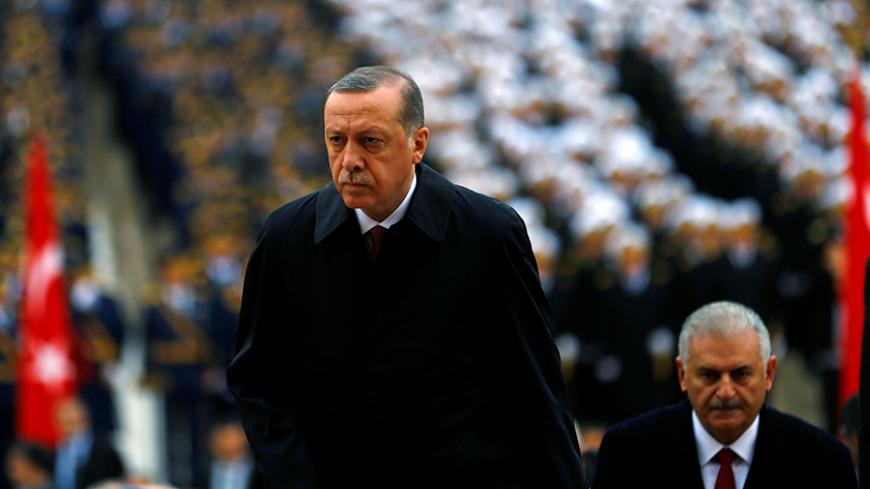 Saying no can have a high price tag for ordinary Turks as pressure builds in the days leading up to an April 16 referendum on constitutional amendments designed to widely expand the president's powers.

On Feb. 2, the photo of a supposedly official document appeared on social media with Turkish Prime Minister Binali Yildirim’s signature. The document asked public employees to avoid using the word “hayirli” ("blessed" or "good"), which is very close to the Turkish word for "no," "hayir." The document asked employees to refrain from using "hayirli" until May so as not to confuse or influence voters.

For decades, conservative Turks have promoted the use of the word “hayirli" in daily greetings. It is widely used to wish someone a blessed Friday. Every Friday, Turkish social media is bombarded with messages and trending hashtags of #HayirliCumalar — "Blessed Friday." So it seems the Turkish language has pulled a little trick on conservatives cheering for a yes vote in the referendum.

The government promptly claimed that the document wasn't real, but of course people rallied against it anyway, and the ripple effects were significant. When Yildirim was asked about it by pro-Justice and Development Party (AKP) journalists, he angrily replied, “Whoever is spreading such fake news will be prosecuted.” His reaction backfired and ending up ensuring that coverage of the fake document spread across the media.

A communications scholar who asked to remain anonymous for fear of losing his job told Al-Monitor, "In the last 10 days, we have not heard anyone was being investigated for this fake document, so it is highly probable that AKP trolls were the ones that published it. It has been more effective than a genuine decree because this way, all AKP supporters get the message that they need to avoid the word 'no,' and words containing 'no,' at all costs."

So even though the document with the prime minister’s signature banning the word “hayirli” was likely fake, supporters of President Recep Tayyip Erdogan have deliberately started omitting the word and substituting others in their daily greetings.

Indeed, the approaching referendum is altering the way people use Turkish and signal their allegiances in the public domain, generating sometimes amusing and sometimes disturbing scenes. The following examples read like Onion satire pieces, but they are verified news stories.

On Feb. 15, a baby girl born in Diyarbakir province was named Evet ("Yes" in Turkish). The parents told the press they wanted to show their appreciation for Erdogan. The district’s AKP representative visited the baby and gave the family a gold coin as a sign of appreciation. The father appeared on television saying the whole family will be voting for the referendum and they hope Baby Yes will be a good luck charm for Erdogan. (Meanwhile, social media users were busy focusing on the fact that the father has three wives, even though polygamy is officially banned in Turkey.)

On Feb. 14, Konya municipality stopped printing and distributing pamphlets against smoking. The pamphlets had read, “Decide what you want to accomplish. Do you want to poison your kids? Have cancer? If you say no, then you have won your life and your future.” Public health officials said they stopped distribution for fear of misunderstanding: “If you say no” had appeared in red capital letters on the leaflets' covers.

Beyond these laughable examples are subtle but undeniable facts: Many of those against the referendum are sticking to their guns and using "hayirli" at every opportunity. Yet, uttering the word "no" on its own — even in a non-political context — has become risky, as can be seen in street interviews posted and shared by various news networks. People who are scared to speak up often say, “I don't know, maybe it's for the best” — but use "hayirlisi," a derivation of the taboo word. Most of them do not want the camera to show their faces.

Their fear is warranted. Several AKP members, including Cabinet ministers and the prime minister, have indicated multiple times that saying no is what terrorists would do. The most worrisome statement came Feb. 12 from Erdogan himself. When asked about current polls, Erdogan was unhappy. He said, “It is too early to gauge the health of the polls” because he had not yet started actively campaigning. Erdogan told the press, “April 16 will be the answer to July 15 [the day of the coup attempt]. Those who say no will be siding with July 15.”

On Feb. 15, another AKP official took a step further, saying that unless 50% of voters say yes on April 16, Turkey should brace itself for the possibility of a civil war. In the ensuing uproar, the AKP announced it would request the official's resignation.

Despite all the public pressure, some brave individuals have taken the risk — and paid the price. One of them is news anchor Irfan Degirmenci, who was fired from his job at Dogan Holding, the most prominent mainstream media network in Turkey, for declaring he would vote no. Pro-AKP media bigwigs were upset at the network for telling the public the reason for Degirmenci’s dismissal.

There have also been multiple stories of brutality and intimidation of those who attempt to join rallies or refuse to distribute pamphlets, or who simply tell others that they plan to vote against the referendum. There has been so much of this talk that people have started questioning if the vote will be done through open or secret balloting, and whether those who dare to say no will be taken into custody after they vote.

Yet, even as the intimidation and pressure from the pro-Erdogan camp increases, it seems the naysayers are gaining momentum. In the past month, a majority of Kurds, significant numbers of ultranationalists, certain groups of Islamists and almost all secularists of Turkey have been joining forces to work for a no vote at the referendum.

These groups would never have come together, not even in the same coffee shop, only a month ago. Now, they are all working on a grass-roots level toward the same goal. AKP members seem to realize that trying to convince the public that only terrorists would say no is backfiring. If that were true, several people have asked on social media, why does the referendum even have a no option?

Some referendum supporters fear that the 18 amendments leading the way to an imperial presidency may not pass, and commentators have raised two intriguing suggestions. One possibility is for these changes to only apply to Erdogan's presidency and be abolished after he leaves office. Because the public has been concerned about what could happen when Erdogan is not the president, this proposal is designed to relieve their worries. Second, Ankara is rumored to be considering a graceful exit plan if support for the referendum doesn't improve in opinion polls by early April: Cancel the vote and blame deteriorating economic conditions that demand attention.

Whatever the result of the April referendum, Erdogan’s desire for an imperial presidency has initiated an opposition movement uniting the least likely of comrades. Perhaps their slogan could be "Hayirda hayir vardir" — "There is goodness in saying no."