Turkey’s Erdogan accuses Germany of 'Nazism' amid row over rallies

Turkish President Recep Tayyip Erdogan is upset that some municipalities in Germany denied the use of meeting spaces for rallies that aimed to muster support from Turks living in Europe in the upcoming referendum on presidential powers. 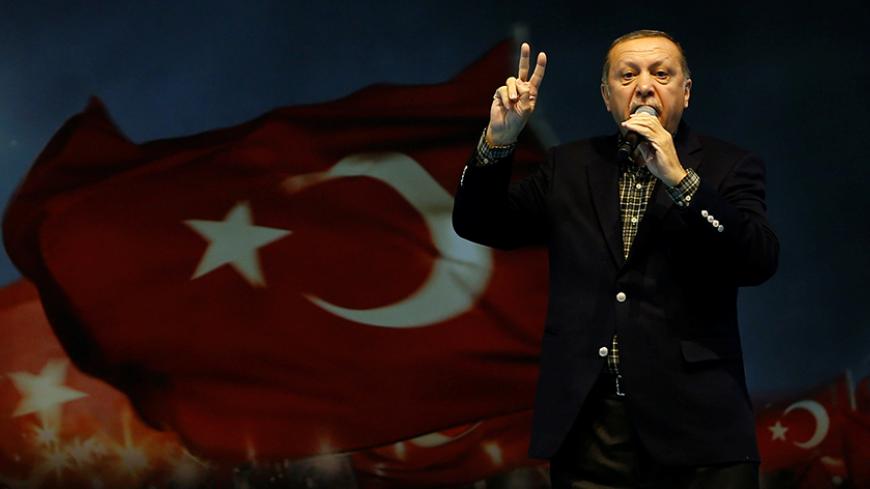 What good is it if a man gains great political power but permanently loses his country and its international partners? Turkish President Recep Tayyip Erdogan might soon find out.

Erdogan is running an increasingly divisive campaign in the run-up to the April 16 referendum to possibly expand his role in Turkish politics. In recent days, his tone has become more disdainful and dangerous than usual. On March 5, it was reported that several German municipalities had canceled rallies by a Europe-based Turkish nongovernmental organization allied with Turkey’s ruling Justice and Development Party (AKP). The rallies would have involved speeches by ministers of Erdogan’s AKP with the intention of whipping up votes to pass the referendum among Turkish citizens living in Germany and other European countries. Erdogan blamed the cancellations on the German federal government and charged that the move was “not much different than Nazi practices.” The irony here is that Erdogan uttered remarks in 2016 that some observers interpreted as admiration for Adolf Hitler.

Of course, Erdogan’s reaction did not come out of thin air. For much of last week, European politicians had been urging AKP politicians not to campaign in Europe out of concerns that they might create animosity among the millions of Turks who live there. Erdogan and his AKP saw the move as European governments’ not-so-subtle endorsement of the “no” camp. Add to the mix the “spying imams” crisis that erupted between Ankara and its European partners in February, and it is easy to see why the “Nazi” crisis boiled over now.

The sad part is that by Erdogan standards, the president had been running a relatively sane campaign. On Feb. 18, he told reporters that although he “would not pressure those who wished to vote 'no' in the referendum,” the supporters of exiled preacher Fethullah Gulen, the Peoples’ Democratic Party (HDP) and the Kurdistan Workers Party (PKK) all clamored for the “no’s” to win. Prime Minister Binali Yildirim, in lockstep with the AKP behind Erdogan, sang a similar tune on Feb. 5 when he argued, “‘Yes’ because the PKK, FETO, HDP say ‘no.’” The AKP government is depicting the HDP and PKK, which Ankara has designated a terrorist group, as extensions of each other, Many Turks, and the AKP, refer to the Gulenist movement as the FETO, an acronym for the Fethullah Gulen Terror Organization.

In recent days, Erdogan and his supporters have begun to equate a “no” vote in the referendum as support for “terrorism,” essentially suggesting that anyone who opposes increasing the Turkish president’s powers is either aiding and abetting terrorists or is an actual terrorist.

Meanwhile, Erdogan, the AKP and their media supporters had a field day with the Turkish president’s verbal blitz against Germany. The pro-government daily Sabah ran the headline “Europe’s Fascist Face Rose from the Dead,” while the Star repeated Erdogan’s “Nazi practice” line.

Even the nominally independent Hurriyet, whose owner Aydin Dogan is once again on Erdogan’s bad side, felt the need to run the Turkish president’s explosive statement at the bottom of its front page: “I thought Nazism was over.” Milliyet, part of Dogan’s media empire until 2011 but now owned by a pro-AKP business group, ran an even more sensational line by Erdogan: “I could show up at [Germany’s ] door tomorrow, and if you won’t let me talk, I’ll get the whole world riled up.”

With this episode, Erdogan and the AKP are falling back on an old trick from their playbook: turning themselves into the underdog. Despite being in power since 2002 and consolidating their position on the commanding heights of Turkish politics in the 2010 referendum, Erdogan likes to portray himself as the “oppressed” because Turks, like voters elsewhere, like seeing the weak guy come out on top.

Unfortunately for Erdogan, his go-to strategy may not work this time. As Ali Bayramoglu and Mustafa Sonmez have pointed out in Al-Monitor, Turkey’s conservative voters are worried about the image of “one man” rule under Erdogan, while populist economic measures to woo the support of the urban poor might backfire.

For the “no” voters to prevail on April 16 is enough of a likely outcome that Al-Monitor’s Cengiz Candar raised the possibility that Erdogan and the AKP might postpone the referendum altogether rather than run the risk of an electoral embarrassment at this critical juncture.

There are 41 days left before the Turkish electorate decides whether it will create a super-presidency and expand Erdogan's powers. Given the painful picture at the moment, many Turks feel that April 16 cannot come soon enough.