Gulen casts a large shadow over Turkey’s ties with West

Erdogan’s fury grows as more European countries express doubt that Gulen is behind last year’s failed coup against him. 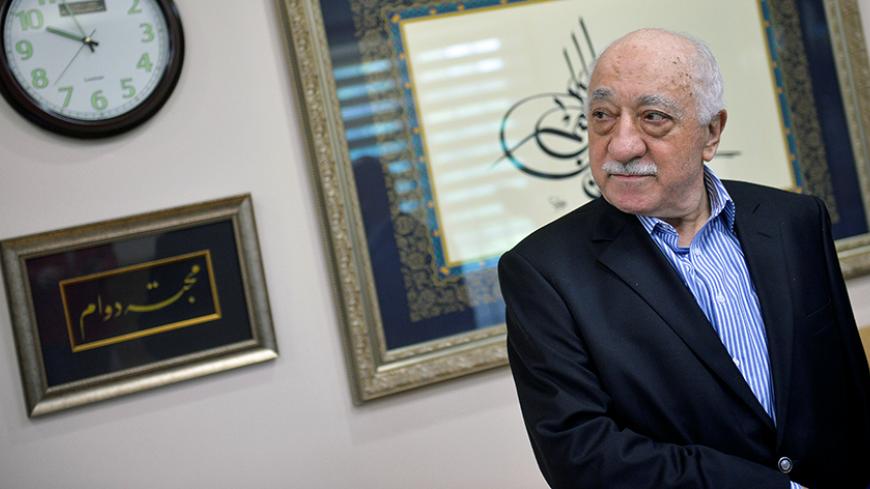 Fethullah Gulen, the self-exiled Islamic cleric residing in Pennsylvania who Ankara accuses of masterminding July’s failed coup attempt against President Recep Tayyip Erdogan, has become one of the main obstacles to improving Turkey’s ties with the United States and Europe.

The perception that Washington is harboring Gulen while European countries are deliberately providing refuge to his followers is increasing Erdogan's fury toward the West. It is also intensifying virulent anti-Western sentiment among his followers.

Bruno Kahl, the head of Germany’s Federal Intelligence Agency (BND), poured fuel on Erdogan’s anger recently when he said he doubted that Gulen was behind the coup attempt.

"Turkey has tried to convince us [about Gulen] at every level, but so far it has not succeeded," Kahl told the news magazine Der Spiegel. He added that the Gulen movement, which has a wide international network of schools, was a "civil association that aims to provide further religious and secular education."

These remarks were promptly scorned by Erdogan.

"He says, ‘We don't see FETO [Fethullah Gulen Terror Organization, Ankara's acronym for the Gulen movement] behind these incidents.’ You should first ask this to your opposite number, chief of Turkey’s national intelligence organization. Who do you think you are? You have to know your limits,” Erdogan railed in an address to followers in the western city of Denizli.

Defense Minister Fikri Isik also weighed in. “If the German intelligence chief says ‘We are not convinced that FETO is behind the coup attempt,’ then he must be either blind or deaf, or he needs to hide the plotters as they failed in what they wished to achieve,” Isik said, according to the semi-official Anadolu Agency.

Erdogan spokesman Ibrahim Kalin claims Berlin is harboring Gulen supporters deliberately. “They are protecting them because these are useful instruments … to use against Turkey," Kalin said in a recent interview.

Ankara says 4,000 FETO members have been provided a safe haven by Germany, where the Gulen movement reportedly has over 170 schools and 300 associations.

Germany's Minister of State for Europe Michael Roth said in November that German officials were “open to all those who are politically persecuted as a matter of principle," and he added that anyone from Turkey could apply for asylum in Germany.

Gulen and his followers are not a thorn only in the side of Turkish-German ties. Norway was also put on notice by Ankara recently when it granted asylum to four Turkish officers and military attaches on duty with NATO after they requested refuge on the grounds that they were likely to be persecuted in Turkey for allegedly being members of FETO.

In January, the Greek Supreme Court refused to extradite eight Turkish soldiers who had taken refuge in Greece after the failed coup attempt.

This pattern is expected to be repeated across Europe, where the widespread view is that Erdogan — who also supports a reinstatement of the death penalty — is out to establish a dictatorship in Turkey.

Meanwhile, Erdogan’s “Nazi” and “fascist” jibes aimed initially at Germany and the Netherlands, but which now target other European countries, are further aggravating the situation.

The Foreign Affairs Committee of the British Parliament also cast doubts on Ankara’s claim about Gulen’s involvement in the coup attempt in a report it issued March 21.

“While there is evidence to indicate that some individual Gulenists were involved, it is mostly anecdotal or circumstantial, sometimes premised on information from confessions or informants, and is — so far — inconclusive in relation to the organization as a whole or its leadership,” the report said.

EU minister Omer Celik expressed Ankara’s displeasure with the report. “What proof are they waiting for?” Celik asked during a panel discussion in the Mediterranean resort of Antalya. “No one can know the details as well as we do. ... They don’t ask our views when preparing these reports, or they discard them if they do ask and write only the views of one side,” he said.

The continuing reluctance of the United States to extradite Gulen, despite the “ample proof” Justice Minister Bekir Bozdag claims to have furnished his US counterpart, is also adding to Erdogan’s anger. Devin Nunes, a California Republican who chairs the US House Intelligence Committee, told Fox News recently that he found it hard to believe that Gulen was the architect of the coup attempt against Erdogan.

US Secretary of State Rex Tillerson is expected in Ankara this week, and although Syria will be the priority topic, Ankara will demand the extradition of Gulen again.

Even if there was the slightest possibility that the Trump administration would do that, remarks by former CIA Director James Woolsey suggesting that former National Security Adviser Michael Flynn may have been concocting a plan with Turkey to remove Gulen will probably have put an end to any such plan.

Bozdag is now warning Washington that Gulen has bought a ranch in Canada where he is allegedly preparing to flee.

Anger with the West over Gulen has also resulted in a slew of conspiracy theories among Erdogan supporters in the media. Mahmut Ovur, a columnist for pro-government Sabah daily, wrote that the protection given to Gulen and his following by the West is the result of a plan put in force in 2010.

Ovur claimed that the intention is to stop Erdogan in his tracks because of his independent ways and the convincing manner in which he is highlighting the double standards of the West, especially with regard to Islamophobia.

In a piece for the pro-government Turkiye daily, columnist Fuat Ugur took the matter to a different level. “The BND, which protected FETO and used it as a tool, planned the July 15 coup attempt and put [it] into practice. It did this for its American bosses,” Ugur alleged.

Ugur added that if the coup had succeeded, the person who was to become Turkey’s new leader would have been welcomed by German Chancellor Angela Merkel with a red carpet, the way Egypt’s Abdel Fattah al-Sisi was.

Erdogan is promising to retaliate against Europe for "supporting terrorism” after Turkey's April 16 referendum that could increase the powers of the presidency.

“Once April 16 is over, we will sit at the table. This cannot continue this way. We, as Turkey, will do what is necessary,” he told a gathering in Ankara.

He added that Turkey would no longer allow Europe to threaten Ankara with ending its EU membership bid.

“This Europe, like before World War II, is a racist, fascist, cruel Europe ... an anti-Muslim and anti-Turkish Europe,” he said.

It is not clear what Erdogan can do, though, to hit back, given Turkey’s continuing economic and military dependence on the West, where millions of Turks — ironically many of them his supporters — also live.

He says Turkey might hold a referendum to unilaterally end its EU bid, but this attempt at “Trexit” is being derided by some diplomats. “It’s like trying to punish a girl who is reluctant to marry you by telling her ‘I have decided not to marry you,’” said one diplomat who spoke to Al-Monitor on condition of anonymity.

What is certain is that the Gulen issue will continue to cast a large shadow over Turkey’s ties with the West for the foreseeable future, given that Erdogan will remain at the helm, regardless of what the upcoming referendum produces.