The Turkish president said operations in northern Syria will expand "step by step" and that Ankara will keep an eye on “who supports these legitimate steps" and "who hinders them.” 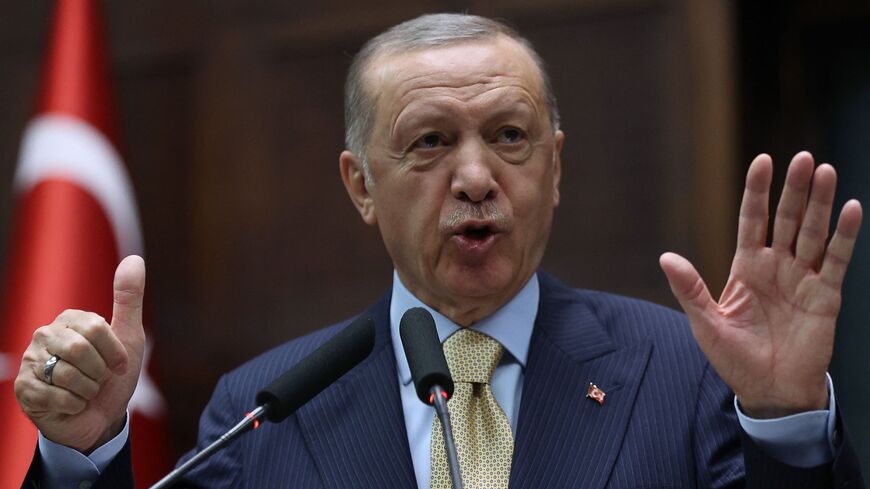 Turkey will clear the Tal Rifaat and Manbij areas of terrorists in a new operation in northern Syria, President Recep Tayyip Erdogan said Wednesday, naming specific targets in a cross-border operation for the first time.

"We are going into a new phase of our determination to form a 30-kilometer (20-mile) deep safe zone along our southern border. We will cleanse Tal Rifaat and Manbij of terrorists and we will do the same to other regions step by step," the president told the lawmakers of his ruling Justice and Development Party (AKP).

Though the president has mentioned Ankara’s plans to form a safe zone alongside the Syrian border before, this is the first time he has explicitly included Manbij and Tal Rifaat in Turkey’s new operation and openly stated Ankara’s intention to expand to other regions.

“Of the two, Tal Rifaat is the lower-hanging fruit because it would create less Western reaction. But Manbij is densely populated and while there is no US presence there, it retains nominal US protection,” Nigar Goksel, Turkey director of the International Crisis Group, told Al-Monitor.

Last week, the National Security Council, an advisory body that brings together top ministers with the military brass, announced it had discussed “additional measures” in Turkey’s fight against terrorism both within the country and beyond. It stated that the present and future operations do not threaten the territorial integrity of its neighbors, Ankara's standard disclaimer before it begins cross-border operations. Erdogan himself said Sunday that the operation could take place “suddenly” and  he was not waiting for permission.

Erdogan’s weekly speech before the AKP deputies, broadcast live on most Turkish TV channels, came amid heavy diplomacy as Erdogan steps up the rhetoric on Turkey’s security concerns in northern Syria. The Turkish president is putting an old plan back on the table amid what he considers more favorable conditions with the war in Ukraine and Turkey’s veto power over the accession of Sweden and Finland to NATO.

"Let's see who supports these legitimate steps by Turkey and who hinders them," Erdogan told his deputies.

It is “divine justice” that the countries that had been “indifferent” to Turkey’s security problems at its southern border now “rushed to NATO” when their own security was threatened with the Russian invasion of Ukraine, he added. Sweden and Finland's NATO accession is blocked by Turkey, which claims that they support the separatist Kurdistan Workers Party (PKK), and because they halted arm exports to Turkey in 2019 following Turkey’s incursion in Syria. NATO Secretary-General Jens Stoltenberg said during a visit to Washington Wednesday that he would convene senior officials from Finland, Sweden and Turkey in Brussels in the coming days to discuss the issue. But speaking to the deputies, Erdogan said that Sweden and Finland have not yet provided Turkey with any concrete responses that meet its expectations. He also took aim at other NATO allies, citing France, Germany and the Netherlands as countries where people freely demonstrated “with posters” of the PKK’s imprisoned leader Abdullah Ocalan.

Greece  also came under fire as Erdogan announced that Ankara  will no longer hold high-level talks with Athens to address differences over rival claims on sea and air space over the Aegean Sea. “Don’t you learn any lessons from history? Don’t try to dance with Turkey,” Erdogan said, presumably addressing Greek Prime Minister Kyriakos Mitsotakis, who he wrote off last week for lobbying US lawmakers against allowing military sales to Turkey.

On Syria, Erdogan has pointed his finger at the United States and Russia for “failing to live up to their commitments” to provide a safe zone at the Syrian border region, as foreseen in a 2019 accord. The failure is pushing Turkey to mount an operation to protect the nation and locals in northern Syria from the terrorist threat of the outlawed PKK and People's Protection Units (YPG), which Turkey considers a terrorist group linked to the PKK, he was quoted as saying by the state-run Anadolu Agency.

Turkey's past operations have been criticized by its NATO allies, including Washington. Last week, State Department spokesperson Ned Price signaled Washington’s concern about reports on potential increased military activity in northern Syria and its impact there, including on US special operations forces deployed in the northeast. Price also referred to the 2019 agreement, saying Washington expected Turkey to abide by it in halting its military operations in the Kurdish-controlled zone.

Erdogan has taken up Turkey’s future military incursions in Syria with his Russian counterpart Vladimir Putin over the phone, according to a statement from the presidency on May 30. “Pointing out that the terrorist organization PKK/YPG's attacks against Turkey and Syrian civilians continue in Syria, President Erdogan said that a 30-kilometer-deep terror-free zone, which was foreseen in the 2019 agreement, had not yet been established and that it was necessary that these areas were secured,” the statement said. The phone call, which also included discussions on Ukraine, precedes a visit by Russian Foreign Minister Sergey Lavrov to Turkey next week.