Ankara’s central role in facilitating the Russia-Ukraine grain deal could strengthen its hand in securing Moscow’s acceptance of a Turkish military incursion. 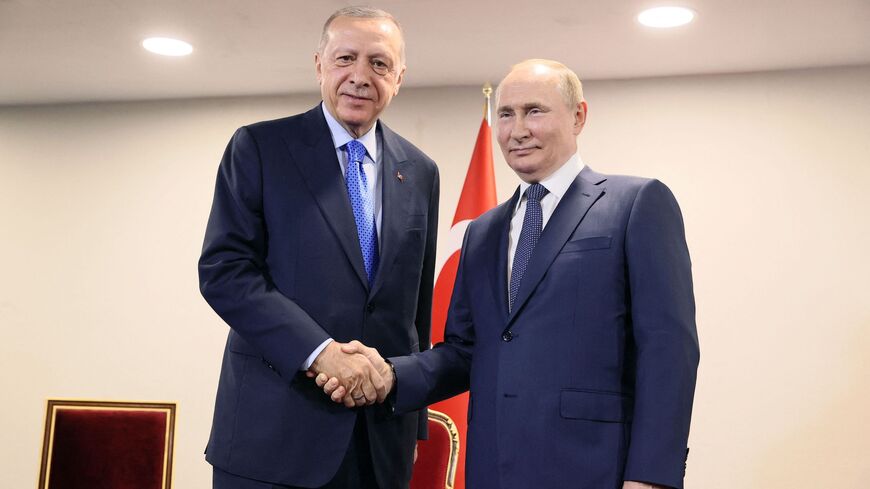 ISTANBUL — Turkey’s president will meet Russia’s Vladimir Putin on Friday amid plaudits for his role in the Ukraine-Russia grain deal and plans for a military incursion into north Syria on his mind.

Recep Tayyip Erdogan’s stock on the international stage has rarely been higher and the Turkish leader will be hoping to translate it into Russian agreement for a mission in Syria targeting the Kurdish force known as the People’s Protection Units (YPG).

The summit in Sochi, some 500 miles (800 kilometers) east of Odessa, where the first Ukrainian grain shipment left on Monday, will be Erdogan’s eighth trip to Russia since the start of 2019.

“Putin and Erdogan have established a special relationship. They understand each other and have direct communication,” said Emre Caliskan, a research fellow at the London-based Foreign Policy Center.

Friday’s Black Sea meeting comes two weeks after Erdogan met Putin and Iranian President Ebrahim Raisi in Tehran. Erdogan pushed for agreement by the Syrian government’s two main backers for the operation against the YPG but came away empty handed.

Now he will be hoping Putin, whose air force largely controls the skies above northern Syria, will be more amenable to non-intervention in any Turkish incursion into the region.

“A primary objective of President Erdogan is to secure the countenance of Vladimir Putin for the intended Turkish military offensive against some [YPG]-held areas in Syria and to possibly discuss the operational details with him in broad terms,” said Eyup Ersoy, a visiting research fellow at the Institute of Middle Eastern Studies at King’s College London.

“A related objective is to achieve Russian cooperation in dissuading Iran from opposing the Turkish military operation.”

Turkey has launched four cross-border operations against Syrian Kurdish groups since 2016 and controls land in the north, aiming to push the YPG away from the border and establish a 30-kilometer (19-mile) secure zone.

An incursion in October 2019 into northeast Syria against the YPG drew widespread international condemnation.

The prospect of a further operation against the YPG was raised by Erdogan in late May and he reiterated the likelihood at the Tehran conference.

The YPG-controlled cities of Tal Rifaat and Manbij have emerged as Turkey’s primary goals.

The YPG is linked to the Kurdistan Workers Party (PKK), which has waged a 38-year insurgency against Turkey. The PKK is considered a terror group by Turkey, the United States and the European Union.

While most YPG territory lies east of the Euphrates, where some 900 US troops support it in operations against the remnants of the Islamic State group, Tal Rifaat and Manbij are YPG enclaves west of the river, where Russian-backed Syrian government forces largely hold sway.

“Russia can give a green light, or yellow light maybe, in the regions that are controlled by Kurdish groups supported by the United States,” said Kerim Has, a Turkish political analyst based in Moscow.

“Maybe Erdogan could postpone the accession of Sweden and Finland to NATO in the Turkish parliament or stop military support to Ukraine.”

While Turkey signed a deal with Sweden and Finland over their bid to join NATO, their accession still needs to be ratified by the parliaments of every alliance member. Erdogan said last month he would freeze the process if they do not keep their promises on counterterrorism.

Putin and Erdogan are also likely to discuss economic matters, especially in the energy sector.

Russia is a major supplier of gas to energy-dependent Turkey, providing it with 45% of its needs last year. An economic crisis and looming presidential and parliamentary elections mean Erdogan is eager for a deal to keep prices down.

“High energy costs contribute substantially to the rampant inflation in Turkey and are corrosive to the prospects of Erdogan’s reelection in the upcoming presidential elections, “ Ersoy said. “In addition, the winter is coming in Turkey and holding the price of natural gas in check is of paramount importance for Erdogan.”

According to Has, Ankara is in a stronger position for dealing with the Kremlin since Russia became bogged down in its war in Ukraine.

“Turkey has become a hub for Russia’s foreign trade and relations in the region and there’s the potential for Turkey to intervene in those relations with the West,” he said. “Russia’s need in Turkey increased over recent months so trade and economic investment is more important for Russia.”