Ankara has yet to secure a go-ahead from Moscow for an anticipated assault on the Syrian town of Tell Rifaat, which is controlled by Kurdish groups. 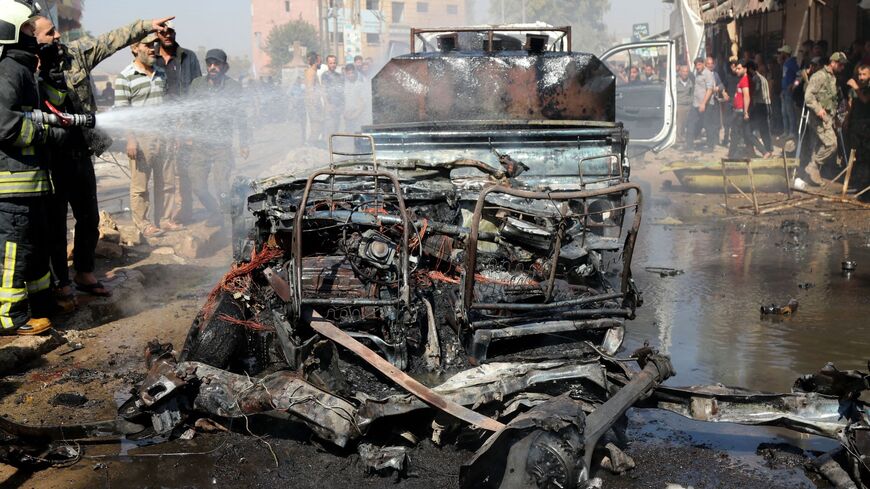 A firefighter works on the remains of a vehicle destroyed in a car bombing in Syria's rebel-held northern city of Afrin on Oct. 11. The bombing killed six people, including at least one Turkey-backed rebel fighter, said the Britain-based Syrian Observatory for Human Rights. - BAKR ALKASEM/AFP via Getty Images

Russian calculus over northern Syria might complicate Turkey’s plans for a new military incursion in the war-torn country.

Ankara’s preparations seem to be focusing on the northwestern Syrian town of Tell Rifaat, from where a series of rocket and missile attacks targeting adjoining Turkish-backed rebel-held areas over the past weeks have killed several Turkish troops on the ground.

“We have run out of patience regarding certain areas in Syria that have been the source of terrorist attacks on our country. We are determined to eliminate the threats originating from those areas,” Erdogan said Oct. 11, referring to the town.

Sources familiar with the deliberations between Ankara and Moscow told Al-Monitor that although Russia is ready to greenlight a limited Turkish incursion in Syria in principle, talks between the two capitals over the location of such an operation are unresolved, with the Kremlin remaining reluctant on the Tell Rifaat option.

Ankara blames the Syrian Kurdish People’s Protection Units (YPG) fighters in Tell Rifaat for the attacks. Turkey’s attempts to seize the strategic town failed during the 2018 Operation Olive Branch. Russia, which has a strong foothold in the region, has promised Ankara to cleanse the area of YPG fighters, a pledge which Ankara says hasn’t been kept.

Russia has full control over Tell Rifaat’s airspace, with joint Russian and Syrian government air campaigns targeting various positions on the ground almost on daily basis. Although Moscow has avoided dispatching ground troops in the region, the area hosts a wide range of actors, from Russian private military contractors and Syrian government troops to YPG fighters and pro-Iranian and Hezbollah militia along with some jihadi outfits.

Sources familiar with the matter told Al-Monitor that Erdogan reiterated Ankara’s goal for Tell Rifaat during his meeting with Russian President Vladimir Putin in their Sept. 29 Sochi meeting, but that Moscow considers the area a strategic stronghold at the heart of trade routes linking northern Aleppo to the northern Syrian towns of Al Rai and Jarablus. The town is a strategic crossroad lying 25 kilometers west of Marea, 22 kilometers east of Afrin and 27 kilometers north of Aleppo.

Ankara, in turn, is advancing its military readiness around the town by fortifying its troops in Afrin, Azaz and Marea.

The primary reason for Ankara's fresh military push is domestic politics. Since Turkey’s foreign policy has become a tool to secure Erdogan’s political survival, the Turkish president might be aiming to consolidate his domestic support at home through a military campaign. Recent polls show that many Turks are in favor of a military push against the Syrian Kurdish groups.

Erdogan might be ready to ignore security risks in a bid to divert attention from Turkey’s deepening economic woes. Since Turkey’s ongoing cross-border operations against Kurdish militants based in northern Iraq have already lost their news value, a fresh push in Syria would flood television screens by security experts and commentators gloating over the Turkish army’s military achievements.

Another reason for Ankara’s quest is strategic. Tell Rifaat is a critical juncture that connects Afrin, the Euphrates Shield region and Idlib. Capture of the town will bring the entire region west of the Euphrates in northern Syria under Turkey's control.

The third reason concerns the regional economy and control of trade routes linking the Syrian border to northern Aleppo — a trade center of the region west of the Euphrates.

Some speculate that Moscow might consent to a limited operation in Tell Rifaat if Turkey removes its military outposts along the M4 highway in Idlib, leaving control of the strategic highway to the Syrian government forces. Thus, Turkish troops’ withdrawal from the military outposts in and around Idlib in the upcoming days might further raise the specter of a possible military incursion against Tell Rifaat, hinting at some sort of understanding between Ankara and Moscow.

Yet this author believes that Moscow’s blessing seems unlikely. Instead of Tell Rifaat, Russia might offer Ankara alternative locations for a military operation, such as the Kurdish-held northern Syrian towns of Manbij or Ain Issa — both adjoining Turkish-backed rebel-held areas.

Russia knows that a military operation may be the only political card Erdogan can play to raise his ever-dwindling support at home. Thus, Moscow right now might be considering whether to offer a military victory to Erdogan in return for some economic incentives such as lucrative military or energy deals between the two countries.

This author believes that Russia might give the go-ahead for a limited operation, and that Moscow is currently working a way to present it as a special gift from Putin to Erdogan.