Saturday’s raid that took the life of Islamic State leader Abu Bakr al-Baghdadi offered a preview of what’s to come for the slimmed-down, US-led fight against IS, officials and experts say, which is now set to focus extensively on targeting the group’s leaders from larger US bases in Iraq and American units in Syria. 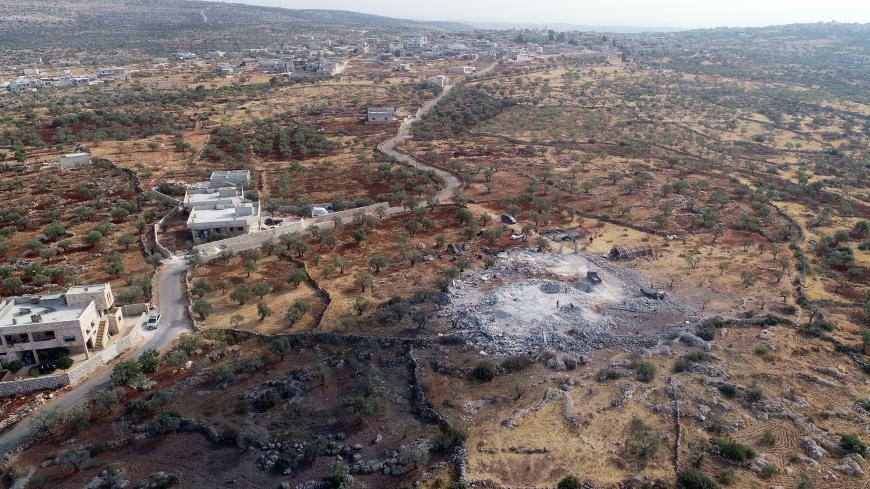 The Donald Trump administration touted the US raid that took the life of Abu Bakr al-Baghdadi as “flawless” in execution, as elite Delta Force operators descending from Chinook helicopters trapped the Islamic State (IS) leader in his northwest Syria compound.

But Saturday’s raid, which Trump himself described as “dangerous and daring,” also offered a preview of what’s to come for the slimmed-down, American-led fight against IS, which is now set to focus extensively on targeting the group’s leaders from larger US bases in Iraq and using American units in Syria.

The mission will come with serious risk, as conventional US forces in Syria are tied down with guarding Syrian oil fields in Deir ez-Zor and at an outpost abreast an Iranian supply line at Al-Tanf, where IS fighters are dispersed and hold no meaningful territory. With a diminished troop footprint, which officials say has been salvaged by President Trump’s desire to maintain control over petroleum reserves, the United States will also lean heavily on the Pentagon-backed Syrian Democratic Forces (SDF) for intelligence.

“We're losing geographic proximity to the threat, as well as intelligence development opportunities,” a former military official told Al-Monitor. “We're going to find out about fewer targets, and it'll be more difficult to move against those we do identify.”

The main thrust of the effort that took Baghdadi’s life came from an American military base in Erbil, which officials now expect will be the major hub of US operations to defeat IS, a senior US official told Al-Monitor, despite Iraq’s insistence that American troops departing Syria won’t be allowed to stay in the country.

Units inside Syria also gathered for the raid. But risks from the operation, which injured two US service members, were evident almost from the start.

American helicopters flew at low altitudes across much of the war-torn country to Baghdadi’s compound in opposition-held Idlib province and had to deconflict airspace with Russia and Turkey for the 70-minute trip, encountering heavy gunfire upon landing. The senior official said that staging cross-border attacks will reduce the tempo of US operations against IS.

The United States also leaned heavily on the SDF’s help to locate Baghdadi on a tip seized when Iraqi intelligence officers captured one of the IS leaders' wives, the official said.

The SDF commander, Gen. Mazlum Kobane, has an intelligence network in Idlib that dates back to the People's Protection Units’ control of the city of Afrin, an official with the SDF’s political wing told Al-Monitor, including Free Syrian Army groups that later joined the Kurdish-led group. “Secular voices see Mazlum as an ally,” said the source, adding, “He is also a leader.”

Kobane, who has a group of local advisers and commanders to facilitate his work, has agreed to continue providing intelligence on IS in exchange for keeping a troop presence at the eastern Syrian oil fields and al-Tanf, the senior American official said, although those are not in Kurdish-held areas.

“If we keep a presence there, they are still with us,” a senior US official told Al-Monitor, adding, “We will keep everything we can.”

The United States will also keep Green Village, a base south of the oil-rich city of Deir ez-Zor, a coalition forward operating base used in the campaign to drive IS out of the Euphrates River Valley that has facilities for American troops to stay overnight. Sources familiar with the facility said it does have a landing strip to allow for resupply.

Defense Secretary Mark Esper said at a Pentagon briefing Monday that US troops near the area would deny Russia, Syria and IS from accessing the oil, which he said helps provide funds to the SDF. "We want to make sure that the SDF does have access to the resources," Esper said, adding, "Our mission is to secure the oil fields." The United States would respond with "overwhelming military force" if threatened by foreign forces, he said.

But as the Syrian battlefield becomes even more complex, some experts believe that a heavy US reliance on SDF for intelligence — which Mazlum said he provided to the Americans for five months ahead of the raid — may no longer be tenable after the SDF sought out protection from Russia and the Syrian regime, which could compromise American sources.

"[The] SDF reportedly will integrate into [Bashar al-Assad's] security structure as part of their agreement with Damascus,” said Dana Stroul, a former Senate Foreign Relations staffer and Pentagon official who is now a senior fellow with the Washington Institute for Near East Policy. “We don’t know what that looks like. If the SDF is still willing to partner with us, there are serious questions about intelligence sharing and relying on them for force protection.”

The former military official who spoke to Al-Monitor said the SDF might have to “take steps to endure their survival” as US support diminishes and Assad's regime consolidates control, such as sharing intelligence with Syrian authorities or revealing information about US forces.

Cooperation with the Kurdish-led group appeared to continue on Sunday, however, as the SDF said IS spokesman Abul-Hasan al-Muhajir was killed in another raid in Aleppo province. SDF spokesman Mustafa Bali said Sunday that more IS fighters were hiding in the same area, where Turkey wields strong influence.

The United States continued to put troops back into Syria over the weekend, as Trump indicated the American pullout was off. “We have continued routine convoys and patrols in northeast Syria,” a spokesman for the American-led coalition told Al-Monitor. “The patrols are always deconflicted with regional military forces and avoid the safe-zone area,” the spokesman added.

On Sunday, open-source analysts picked up a recent buildup of American Chinook helicopters at Al-Asad Air Base in Iraq. US officials did not confirm the deployment. The Syrian Observatory for Human Rights also said that approximately 500 US troops had been added back into the country, but those figures weren’t immediately confirmed by American officials. A coalition spokesman told Al-Monitor on Saturday that US troops had arrived to guard oil-rich areas on Saturday.

IS has not held territory in the oil-rich region, opting to use sleeper cells to conduct drive-by and hit-and-run attacks instead of reconstituting, and moving frequently back and forth across the border with Iraq to avoid detection. Current and former US officials have worried that IS will be able to reconstitute its ranks with jailbreaks from SDF-guarded prisons that hold up to 10,000 fighters, as Turkey further entrenches its presence in northern Syria.

Even with IS’s self-declared caliphate rolled back, their ability to secure oil fields limited and their leader now dead after an American raid, experts believe the militant group’s experience of managing a complex bureaucracy and ruling a territorial expanse once the size of Britain will allow it to be resilient.

“[IS] became highly institutionalized and developed bureaucratic structures that were necessary to manage territory at its height,” said Jenna Jordan, an associate professor at the Georgia Institute of Technology and the author of a new book on decapitation strikes. “Those institutions and structures that were set up are going to make the group able to withstand these kinds of shocks,” Jordan said.