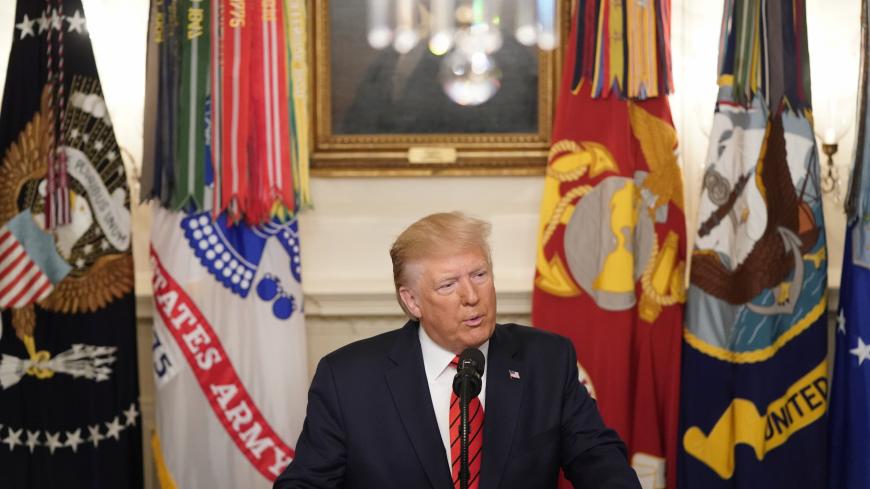 Islamic State leader Abu Bakr al-Baghdadi killed himself after elite US troops cornered him during a raid in northwestern Syria on Saturday, US President Donald Trump said today. A senior US official informed Al-Monitor of Baghdadi’s death before the White House announcement, which came after months of the Pentagon probing near the militant group chief’s suspected hideout in the contested city of Idlib.

Baghdadi, whom the United States had pursued without luck since first deploying American forces to Iraq to roll back the IS caliphate five years ago, detonated a suicide vest under the pressure of the special operations raid launched from Erbil, in Iraqi Kurdistan, Trump said.

The official, speaking not for attribution, described the effort as a “complex airborne raid” led by US Army Delta Forces supported by intelligence collection by the CIA and the Syrian Democratic Forces, the Pentagon-backed group that served as the main fighting group for the American-led fight against IS.

Trump, who watched the raid on drone feeds in the White House Situation Room alongside Vice President Mike Pence and Chairman of the Joint Chiefs of Staff Gen. Mark Milley, said Baghdadi died “whimpering, crying, and screaming all the way” as he ignited his suicide vest with three children in a dead-ended tunnel.

Baghdadi’s body was mutilated by the blast, Trump said, DNA and biometric test results gave immediate positive identification. “It was him.” The United States had the IS leader under surveillance “for a couple of weeks” and knew the Idlib compound had tunnels but had to cancel two to three efforts, the commander in chief added, as it appeared the head of the self-declared caliphate might be on the move.

“He died like a dog,” the president said during a question and answer session at the White House on Sunday morning. “He died like a coward.” US forces took fire after landing at the compound after a one hour, 10 minute flight, Trump said. No US forces were killed in the raid. Defense Secretary Mark Esper told ABC's Martha Raddatz that 100 special operations forces flew into the compound on CH-47 Chinook helicopters.

After word of the raid, first reported by Newsweek, broke early Sunday morning, the commander of the Syrian Democratic Forces (SDF), Mazlum Kobane, tweeted that “five months” of joint US intelligence cooperation with the Kurdish-dominated units had led to Baghdadi’s death.

“Important to note that these operations require a presence on the ground to develop these networks,” said the senior official. “It will be harder to do this as we withdraw.”

Turkey, which launched an incursion into northern Syria on Oct. 9, did not provide support, but was informed of the US raid because of the operation's proximity to the Turkish border. Russia and Turkey brokered a cease-fire in Idlib earlier this summer before the Bashar al-Assad regime intensified an offensive to retake the province, one of the last opposition strongholds in Syria.

The US deconflicts airspace with Russia in northwestern Syria where the raid took place, but the Pentagon would not have told Moscow the reason for launching the operation, the official said. Iranian officials also told Reuters that they were given notice of the raid.

The United States had launched multiple strikes this year targeting Hurras al-Din, an al-Qaeda Syrian affiliate in Idlib, near Baghdadi’s purported hideout. The same intelligence effort helped lead to the raid that killed the IS leader, the senior US official said.

The move came as the US began to put troops back into eastern Syria this weekend, as Trump appeared to reverse his decision to withdraw most American troops from the country. Trump teased the news of the raid Saturday night, tweeting, “Something very big has just happened!” but providing no other details.

On Saturday, hours before the raid that killed the IS leader, US troops began to reinforce positions in Syria's oil-rich Deir ez-Zor region alongside the SDF, a US defense official told Al-Monitor, as images of military vehicles crossing back into the war-torn country from Iraq surfaced on social media.

The Pentagon "will not discuss details or timelines" of troop deployment, the defense official said.

The senior US official who had provided details on the raid said US troops had crossed back over the border from Iraq, where leaders said earlier this week that US troops departing from Syria could not stay.

Speaking at the White House on Sunday, Trump acknowledged that a residual presence of American troops would stay in Syria to guard the war-torn country’s oil deposits.

“We’re out,” Trump said. “But we are leaving soldiers to secure the oil.”