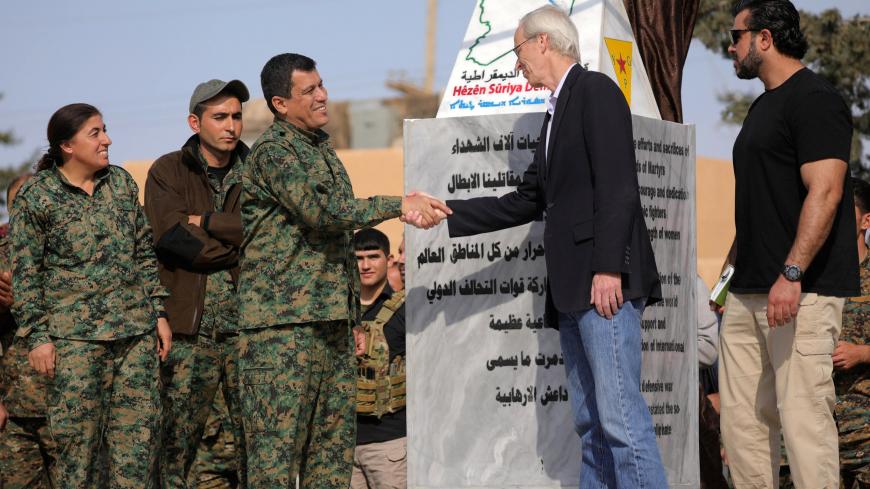 Mazlum Kobani, SDF's commander in chief, shakes hands with the adviser for the US Department of State in northern Syria William Robak, at al-Omar oil field in Deir ez-Zor, Syria, March 23, 2019. - REUTERS/Rodi Said

Turkey has stepped up its campaign against Mazlum Kobane, the commander of the Syrian Democratic Forces (SDF), as part of a broader Turkish effort to deny the US-backed Syrian Kurds political legitimacy.

Ankara is equating Kobane, who is on Turkey’s most-wanted list, with Abu Bakr al-Baghdadi, the leader of the Islamic State (IS) who died in a US military raid in northwest Syria on Saturday.

Turkish Interior Minister Suleyman Soylu said today that Kobane “is every bit a terrorist as slain Baghdadi.” The Justice Ministry has drawn up a request for his extradition along with one for his provisional arrest. The paperwork has been forwarded to Turkey’s Foreign Ministry.

The moves appear geared to prevent Kobane from traveling to Washington, where a group of congressmen led by Sen. Lindsey Graham, R-S.C., are lobbying to arrange a meeting between the militia leader and President Donald Trump.

Despite the groundswell of global sympathy for the SDF, which played a critical role in defeating IS — and in helping track down its leader — Turkey has largely succeeded in squashing the SDF's aspirations.

Members of the Syrian Democratic Council, led by Kobane’s close ally, Ilham Ehmed, will not be among some 150 Syrians who will convene under UN auspices in Geneva on Wednesday to begin drafting a constitution for their war-ravaged country.

Turkey, Iran and Russia have led the so-called Astana process, which has effectively allowed the Syrian regime to claw back territory from the rebels. Thanks to Trump’s decision earlier this month to let Turkish forces cross into northeast Syria by pulling back US troops and last week’s deal between Turkish President Recep Tayyip Erdogan and Russia’s Vladimir Putin, the SDF has been pushed back from much of the Turkish border. A large Russian military delegation is expected to arrive in Ankara on Oct. 29 to discuss implementation, Turkey’s pro-government A Haber television reported.

Idlib, where Hayat Tahrir al-Sham (HTS) militants are dug in, and Deir ez-Zor, where US forces withdrawing from the Kurdish-majority areas along the Turkish border have redeployed, supposedly to “guard the oil,” are expected to come up during the talks.

Russia will undoubtedly seek to threaten Turkey with the Kurds to get it to tame HTS in Idlib, and to threaten the Kurds with Turkey to get them to cede further ground to the regime.

SDF forces have until midday Tuesday to pull 30 kilometers (19 miles) back from the Turkish border under the terms of the Turkish-Russian agreement. Turkish and Russian forces are then supposed to launch joint patrols in the designated areas, which fall to the east and west of Turkey’s newly acquired slab of land between the towns of Tell Abyad and Ras al-Ain.

Sources familiar with the administration’s internal debates told Al-Monitor that the US Embassy in Ankara was pushing back against Graham’s demands that Kobane be granted a visa and the embassy may well prevail. Turkey’s extradition claims are based on Kobane’s prior role within the outlawed Kurdistan Workers Party (PKK), which has been waging an armed campaign against Turkish security forces for the past 35 years.

Omer Celik, a spokesman for Erdogan’s ruling Justice and Development Party, said today that the invitation to Kobane “is a major contradiction in the fight against terrorism.”

The PKK is designated as a terrorist organization by the State Department. The United States played a key role in helping Turkey capture PKK leader Abdullah Ocalan in 1999. It recently placed bounties on some of the PKK’s top commanders in the field in an effort to appease Turkey over the Pentagon’s continued alliance with Kobane and the SDF.

But Ankara’s standing is at an all-time low following its Oct. 9 incursion into northern Syria, which effectively collapsed the Syrian Kurds’ experiment with autonomy and ushered back Syrian regime forces to much of the Turkish-Syrian border where the SDF had held sway.

Brett McGurk, the former presidential envoy to the anti-IS coalition, said in an op-ed in The Washington Post today, “Turkey has some explaining to do. Baghdadi was found not in his traditional areas of eastern Syria or western Iraq, but rather in northwestern Syria, just a few miles from Turkey's border.” McGurk reminded readers, “Most of the nearly 40,000 foreign fighters that flooded Syria during its civil war came through Turkey into northwestern Syria” and said it was “telling that the US military reportedly chose to launch this operation from hundreds of miles away in Iraq, as opposed to facilities in Turkey, a NATO ally, just across the border.”

US officials have since confirmed that Turkey was not involved in the mission but was informed of it, part of a deconfliction effort that also involved Russia, which controls the airspace over Idlib. The Kurds, both Syrian and Iraqi, have been credited with providing significant intelligence that led to Baghdadi’s ignominious end. And Kobane called the raid "a joint operation” on his Twitter feed.

Omer Taspinar, a Middle East expert at the National War College and a nonresident senior fellow at the Brookings Institution, told Al-Monitor, “The fact that US forces did not use the Incirlik Air Base [in southern Turkey] shows there is a lack of trust for this sensitive operation and as President Trump made it clear Sunday in his remarks the United States tried very hard to not share sensitive information with Russia, Iraq and Turkey.” Taspinar continued, “Under normal circumstances they might have used Incirlik, but apparently judged this might cause problems in terms of intelligence [leaks] as it is a Turkish base, even though the United States has a presence there.”

Turkey’s reputation as an IS enabler has stuck even though Turkey itself has been the victim of multiple IS attacks. It has opened its air bases to the coalition and carried out airstrikes against the jihadis inside Syria, wresting Jarablus, al-Rai and Dabiq from them in a 2016 ground offensive dubbed Operation Euphrates Shield. It has been cracking down on IS networks inside the country, arresting 20 militants in a raid in Ankara today. That said, the largest IS attack in October 2015, which left 107 dead, targeted a pro-Kurdish peace rally in Ankara. Another attack in the town of Suruc near the Syrian border, two months prior, was aimed at socialist young people who were planning to rebuild the Syrian Kurdish town of Kobani. The government was accused of failing to take adequate security measures to protect them.

Nicholas Danforth, a senior visiting fellow at the German Marshall Fund, told Al-Monitor, “For years Turkey has faced criticism — both fair and unfair — about its relationship with IS. Whatever facts emerge, this will undoubtedly intensify because of where Baghdadi was found. And while Turkey has consistently condemned the SDF as a terrorist group and a nonconsequential nonstate actor, Washington remains convinced the SDF was a far better partner in the fight against IS.” There may be a silver lining, however. “From the perspective of [planned] congressional sanctions [against Turkey], the intensified anger at Turkey may be offset if Baghdadi’s death helps mollify the outrage over Trump’s withdrawal decision.”