Turkey relying on events to turn tide against Kurdish YPG

A Turkish military operation in northern Syria does not appear to be in the cards, but Ankara is determined to use the threat of one to curb Kurdish aspirations. 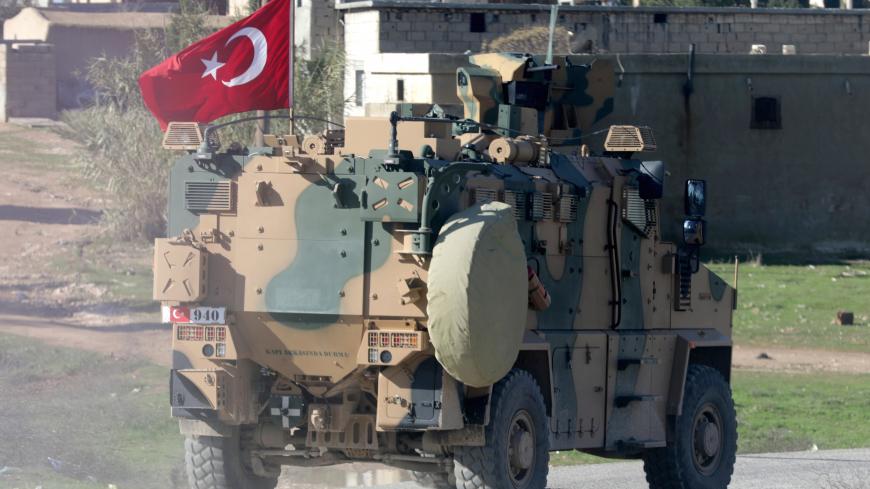 Turkey’s much-threatened military operation against the People's Protection Units (YPG) east of the Euphrates River in Syria remains unlikely for the foreseeable future due to political and military obstacles.

Ankara is determined, however, to keep the heat on the American-backed Kurdish group — which the Turkish government says is a terrorist organization — and continues to insist that the option for a military operation remains on the agenda.

The belief in Turkish government circles is that this threat is helping limit support for Kurdish political aspirations because it has shown that plans that exclude Ankara will have undesirable consequences for the region.

Ankara also thinks that, politically speaking, the situation in northern Syria has been developing to the YPG’s disadvantage since President Donald Trump announced in December that American forces would be withdrawn from Syria.

Washington has backpedaled on this decision since then, and all indications are that the US military will remain in Syria for the foreseeable future, even if this is merely a symbolic presence.

Turkish officials are, nevertheless, aware that Trump pulled the psychological rug from under the Syrian Kurds by showing them that they cannot rely on the United States in the long run with any sense of certainty.

Paul Iddon, a commentator for the Kurdish daily Rudaw, said, “Today the Syrian Kurds find themselves increasingly stuck between a rock and a hard place with no desirable options available to them going forward.”

This has forced the Syrian Kurdish groups to seek a negotiated settlement with Damascus from a much weaker position.

Turkish officials have also noted that Damascus is unwilling to accept the YPG’s demands for a negotiated settlement, especially now that the group faces an uncertain future.

Foreign Minister Mevlut Cavusoglu said in January that Turkey would not like to see the Assad regime move into areas evacuated by US forces because Damascus could go on to cooperate with the YPG against Turkey.

Damascus’ support for the outlawed Kurdistan Workers Party (PKK) in the 1980s and 1990s continues to color Ankara’s outlook on this matter.

However, Ankara may be moderating its position, given the hard-line opposition Damascus is taking against any form of self-administration by the Syrian Kurds.

Turkish officials are aware that Damascus has always opposed the political aspirations of its Kurds in the past, even as it was supporting the PKK’s separatist campaign in Turkey.

A source close to the Turkish government who wished to remain anonymous due to his sensitive position believes Turkey’s threat of an operation east of the Euphrates has altered the equation for the YPG and its political wing, the Democratic Union Party (PYD).

“They know Ankara is serious because it has already mounted two operations in Syria that were not prevented by the Americans or the Russians, even if they disapproved of them,” the source told Al-Monitor. “This has shaken their trust in the Americans and Russians,” he added.

Meanwhile, President Bashar al-Assad has been using the Turkish threat and Syrian Kurds' shaken confidence in the United States against the YPG.

“Nobody will protect you except your state. If you do not prepare yourselves to defend your country, you will be nothing but slaves to (Turkey),” he added.

The YPG’s demands are unlikely to be accepted by Damascus in the best of times.

“One is that our autonomous administrations here be preserved and accorded legal status. The second is that the SDF be preserved. The security of the territory east of the Euphrates River should be left to the SDF. These are our red lines,” Kobane said.

Syrian Defense Minister Gen. Ali Abdullah Ayoub spelled the regime’s position March 18 when he said the SDF would be dealt with in one of two ways.

Ayoub, who spoke in Damascus after a meeting with the Iranian and Iraqi chiefs of general staff, listed these as “national reconciliation or the liberation of the areas that they control through force.”

He was backed by Iran’s chief of staff, Gen. Mohammad Baqeri, who said their talks in Damascus had discussed ways in which areas in Syria still outside of government control could be recovered.

Ankara recently announced joint military operations with Tehran against the PKK positions along the border. This announcement, however, has not yet been confirmed by Tehran.

This signals greater cooperation between Ankara and Tehran against Kurdish aspirations in the near future. Iran is also cool to the idea of any Kurdish autonomy in Syria and opposes the SDF.

Put another way, there is an emerging convergence of interests on the Kurdish question between Ankara, Tehran and Damascus.

The only thing preventing this from developing into a full-blown alliance between the three countries is the continuing antipathy felt for Assad by Turkish President Recep Tayyip Erdogan, who considers the Syrian leader to be one of his regional archenemies.

Many Turkish voices have, nevertheless, been arguing for some time that it is in Ankara’s interest to enter into meaningful dialogue with Damascus.

Turkey is already maintaining low-level talks with the Syrian regime through its intelligence service MIT, but many believe this is not enough to meet the growing challenges facing Ankara.

Ismet Ozcelik, from the nationalist daily Aydinlik, pointed to the changing geopolitics of the eastern Mediterranean as a result of the strong presence Russia has secured for itself in the region; the US backing for Turkey’s principal rivals Greece, Cyprus and Israel; and Trump’s blind support for Israeli expansionism.

“Turkey has to urgently strengthen its own alliances. It has to act together with Russia, China, Iran, Syria, Lebanon, and Egypt. The most urgent thing is to cooperate with Damascus,” Ozcelik wrote.

Deniz Zeyrek, a columnist for the opposition daily Sozcu, said Turkey’s strong opposition to Trump’s decision to recognize Israeli jurisdiction over the Golan could be a catalyst for normalized ties between Ankara and Damascus.

“The [Syrian] civil war has to end if Syria is to take effective steps over the Golan Heights, and for important regional countries like Turkey to stand by it in opposing Israel. This, in turn, requires acknowledging Syria’s territorial integrity and recognizing its existing government,” Zeyrek wrote.

Turkey has no problem in acknowledging Syria’s territorial integrity since this is a central tenet of Turkey's Syria policy. Turkey is also building its opposition to Syrian Kurdish political aspirations on this point.

Zeyrek argued that Turkey is being pushed into a position where it will have to choose between two enemies, the YPG or Assad. Given developments on the ground, the Assad regime could emerge as the lesser of two evils for Ankara.

Meanwhile, there is continuing anger in Ankara over Washington’s support for the YPG, and American equivocations on promises to Turkey about ending the presence of the YPG in Manbij, a Syrian city near the Turkish border.

Ankara is, nevertheless, aware that the YPG is not totally pleased with Washington because it is not getting the full political support it wants from the American side against Turkey.

Washington clearly is shying away from risking a full collapse of its already difficult ties with Ankara, because it still relies on these ties for its broader strategic interests in the region.

The disappointment was evident in Kobane’s remarks to Al-Monitor, too. Those remarks also showed that the only thing that will strengthen the YPG’s hand today is a clear decision by the United States to stay in Syria for the long haul in order to check Iranian ambitions.

Even if that happens though, it is not evident that this will guarantee autonomy for Syrian Kurds, given that America ultimately is out to secure its own interests over and above the interests of the Kurds; this is something that has been proved time and again in the past.