Mazlum Kobane, the chief of the Syrian Democratic Forces, may visit Washington — a move that would likely prompt Turkish calls for his extradition. 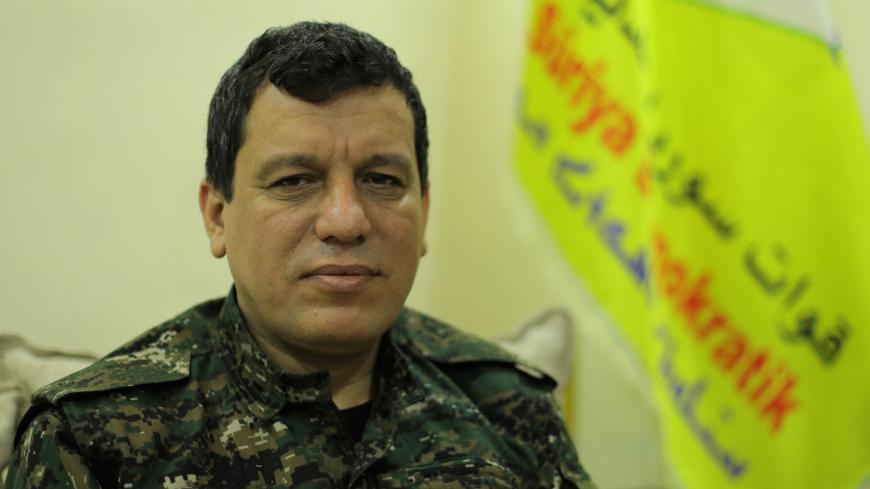 Mazlum Kobani, the commander in chief of the Syrian Democratic Forces, is pictured during an interview with Reuters in Ain Issa, Syria, Dec. 13, 2018. - REUTERS/Rodi Said

As Turkey and the United States lurch from crisis to crisis, the latest flashpoint centers around Mazlum Kobane, commander in chief of the Syrian Democratic Forces (SDF), the Kurdish-led militia that crushed the Islamic State (IS) in Syria with US backing.

Turkey is furious that a group of congressmen, led by Sen. Lindsey Graham, R-S.C., have invited Kobane to Washington and are pressing the State Department to issue him a visa. Turkey calls Kobane a "terrorist" and has issued a red alert for his arrest via Interpol. Turkey has also placed a multimillion-lira bounty — with a value that shrinks alongside Turkey’s national currency — on his head.

More alarmingly for Ankara, President Donald Trump, who has chatted with Kobane by phone in recent days, seems to have embraced the idea. Trump tweeted Oct. 23: “Thank you General Mazloum for your kind words and courage. Please extend my warmest greetings to the Kurdish people. I look forward to seeing you soon.”

Trump was responding to Kobane’s message, which was relayed via Twitter by an SDF spokesman. Kobane thanked the president for his “tireless efforts that stopped the brutal Turkish attack by jihadist groups on our people.” Graham, who has seemingly become the Kurds’ Trump whisperer, apparently told Kobane that the president responds well to flattery.

Those who worked with Kobane, particularly in the Pentagon, bitterly oppose Trump’s desire to withdraw US troops from the Kurdish-held area and agree that the SDF commander should be honored for his contribution.

Gen. Joseph Votel, who was the head of US Central Command until March 2019, when IS’ last stronghold in Baghouz fell, said of Kobane in comments emailed to Al-Monitor: “I would simply say that he was a very trustworthy and effective partner for us. He was a capable military leader and was well respected by all who came into contact with him.”

Votel continued: “Only Mazloum could have brought Arabs and Kurds together in an alliance against IS and hold it together in a very complex environment — this was his greatest military achievement. We met often — almost monthly face to face — and routinely talked by video conference in between. He was always positive and helpful in moving the campaign forward.”

It remains unclear whether Kobane will actually travel to Washington. He said he would if circumstances permitted. More pertinently, would it be in the Kurds’ interest for him to do so?

After all, it was Trump who greenlighted Turkey’s Oct. 9 incursion into northeastern Syria, paving the way for the withdrawal of US troops from the Turkish border and the subsequent insertion of Russian and Syrian regime forces in their stead.

As the Trump administration continues to seesaw over whether to leave some troops — to safeguard oil fields, the latest thinking goes — the Syrian Kurds would be better served cutting a deal with the Russians and the regime as soon as possible, many of their well-wishers in the administration believe. They view the invitation as a pitiful attempt to atone for America’s betrayal.

But in Turkey’s eyes, such a visit would confer political legitimacy on Kobane, the SDF and, by extension, the Kurdistan Workers Party (PKK), the militant group that has waged a 35-year armed campaign inside Turkey, initially for independence and now for Kurdish autonomy.

Kobane, now in his 50s, was a high-ranking member of the PKK, code-named Sahin Cilo, until he returned to his native Syria in 2011, when the civil conflict erupted. His real name is Ferhat Abdi Sahin. He ran the PKK’s European operations in the '90s, moving between Germany, the Netherlands and Italy. He moved to Europe to receive care for a leg injury suffered in Iraqi Kurdistan, where the PKK’s military command is based, and still walks with a slight limp.

Aliza Marcus, the author of "Blood and Belief," the most authoritative book to date on the PKK, told Al-Monitor that a visit by Kobane to Washington looks like a win at first glance, but it would be an empty one.

"If Mazlum comes he risks looking like he’s giving his approval to US actions and he risks being caught up in a legal nightmare," she said, "as Turkey has already made clear its intentions to ask for his arrest and will certainly seek to have him extradited.” Turkey claims that, as a former PKK commander in the field, Kobane has Turkish blood on his hands.

As a tenured member of the movement who are known as “kadro,” Kobane has forsworn marriage. Unlike many, however, he is not dogmatic and treats his fellow fighters “like family,” said a source who has spent time with him. “He’s open-minded and flexible, has a thirst for knowledge and wants to keep up with the latest technology,” the source told Al-Monitor.

The son of a medical doctor from the village of Hellenj near the town of Kobani — hence his nom de guerre — Kobane is famously calm, even in the tightest moments. “He makes critical decisions very quickly, pacing up and down the room, then says, ‘I’ve got it,’ before proceeding to act,” the source said.

“The Thunder Battalion,” a 2003 book that chronicles the PKK’s encounters with the Turkish army, is said to have been inspired in part by Kobane’s prowess.

In Syria, Kobane’s primary role was to mobilize the PKK’s Syrian branch, known as the People’s Protection Units (YPG). The PKK has been on the State Department’s list of terrorist organizations since 1997, when Turkey was held in high favor in Washington and relations between Turkey and Israel were at their peak.

The United States began airdropping weapons to the YPG in 2014 to help break the IS siege of Kobani, a move that set the stage for the US military partnership with the Syrian Kurds and the meltdown in Turkish-US ties. In Turkish eyes, its NATO ally was collaborating with its No. 1 enemy — that the YPG was not listed alongside the PKK as a terrorist group was irrelevant.

Rewarding Kobane with an audience at the White House, Turkish officials fume, would be the last straw. The Turkish government is pulling out all the stops to make sure that doesn’t happen. In truth, however, the root cause of the current imbroglio lies in Turkey’s refusal to forge a just and enduring peace with its own Kurds. Washington’s partnership with their Syrian brothers simply added to Turkish paranoia about supposed Western plans to set up a client Kurdish state with large chunks carved out of Turkey.

Paradoxically, Turkey’s President Recep Tayyip Erdogan went further than any of his predecessors in seeking to fix the Kurdish problem. Whether it was to reduce the power of the Turkish army — which he saw as a foe in the early days of his Justice and Development Party’s rule — or to woo Kurdish voters when he believed they would cinch his victory at the polls, Erdogan was the first Turkish leader to authorize direct talks with the PKK and its imprisoned leader Abdullah Ocalan.

The latest round of peace talks collapsed in the summer of 2015 for two reasons: The PKK refused to go along with Turkey’s demands that it shelve its autonomy project in Syria. And Erdogan calculated that he was better off courting nationalists to keep his popularity high and the fiercely anti-Kurdish security establishment off his back.

But until that time, Turkish officials met regularly with the PKK and its Syrian affiliates, including Kobane. In a March interview, Kobane confirmed that he had met with officials from Turkey’s national intelligence agency, the MIT, and that during his days in Europe he was approached by a Turkish colonel to discuss a possible cease-fire.

Although Turkey now insists that the YPG is a terrorist organization, Turkish officials once advertised that hundreds of YPG fighters wounded in the battle of Kobani were being treated in Turkish state hospitals. In other words, they were happy to make the distinction between the two groups to prove that Turkey was “not anti-Kurdish, but anti-PKK.”

In February 2015, the YPG facilitated a critical Turkish mission to transfer the remains of Suleyman Shah, the grandfather of the founder of the Ottoman Empire, from a shrine in northern Syria to a village near the Turkish border. The objective of the operation was to prevent IS from destroying the tomb. Had the peace talks between Turkey and the Kurds not collapsed, Kobane may well have been feted in Ankara long before crossing the Atlantic. Now Turkey wants to put him in jail.