The apology is testament to the group's determination to see unity talks between the Kurdish National Council and the PYD through to a successful end. 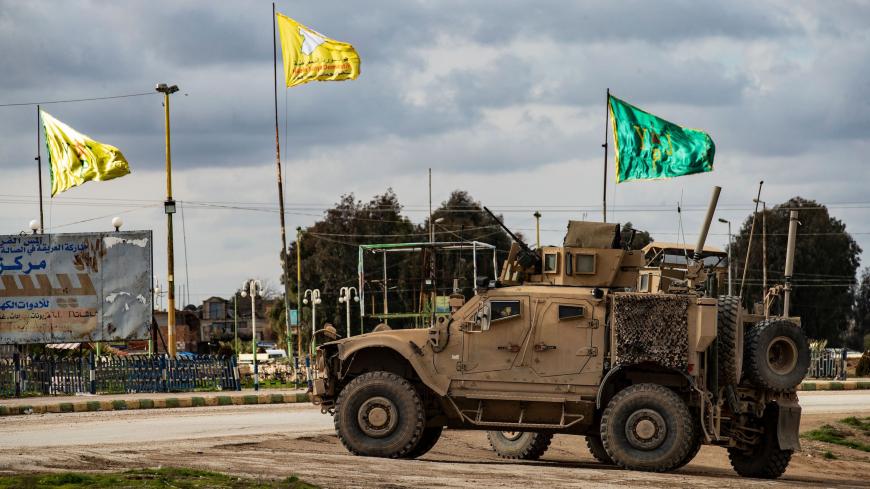 A patrol of US military vehicles is seen near the flying yellow flags of the Syrian Democratic Forces and green flags of its constituent Women's Protection Forces in the town of Tal Tamr in Syria's northeastern Hasakah province along the border with Turkey, Feb. 8, 2020. - DELIL SOULEIMAN/AFP via Getty Images

The leading Kurdish militia in northeast Syria has apologized for its actions against an opposition Kurdish political party that resulted in the deaths of several civilians in 2013. The gesture by the People’s Protection Units (YPG) is aimed at accelerating a US-brokered political reconciliation process between its political arm, the Democratic Unity Party (PYD), and an alliance of opposition parties united under the umbrella of the Kurdistan National Council.

YPG spokesman Nuri Mahmoud today called the events that took place in June 2013 in the town of Amude “a catastrophe.”

“We acknowledge the big mistake that killed innocent people as a result of a collision between one of our military units that was on the way back from the front line and demonstrators,” Mahmoud said. He was referring to protests that erupted in Amude over the arbitrary detentions of members of the opposition Yekiti party. The demonstrations lasted for two days, and at least six people were reported to have died after YPG snipers took aim at the crowd.

The remarks came during a meeting that took place between YPG representatives and members of a committee appointed to make amends for the deaths under the auspices of the Syrian Democratic Forces (SDF) commander in chief, Mazlum Kobane, who also goes by the name Mazlum Abdi. Kobane told the meeting that he was ready to do “everything possible to heal this wound” and pledged material compensation for the victims’ families.

The apology is testament to Kobane’s determination to see unity talks between the Kurdistan National Council and the PYD through to a successful end. Amy Austin Holmes, a visiting scholar at Harvard University and a fellow at the Wilson Center who has traveled extensively in the Kurdish-administered northeast of Syria, said the YPG’s decision to formally apologize for the 2013 massacre “is an important step in achieving justice and accountability.” Holmes told Al-Monitor in emailed comments, “One of the main impediments to the Kurdish unity talks is that so many are still haunted by the past. In a region where perpetrators regularly deny past atrocities — often for generations — the [YPG’s] open acknowledgement of wrongdoing and willingness to compensate the victims is extremely rare.”

The PYD and the YPG were blasted by rights groups for their heavy-handed tactics against the Kurdistan National Council and other opponents in the early days of self-rule. Human Rights Watch documented these in a 2014 report that drew attention to arbitrary arrests and unsolved killings and disappearances that occurred under the PYD and YPG. Since last year, and at Kobane’s behest, the Kurds' autonomous administration has begun to investigate the disappearances and to free political prisoners while inviting opposition groups who existed long before the PYD to reestablish themselves in the northeast.

Kobane used to run the YPG before assuming command of the SDF, the Pentagon’s top ally on the ground in the battle against the Islamic State. He is now the mentor and the guarantor of the Kurdish unity talks. (The United States is facilitating the talks, but is not a guarantor of them.) As such, Kobane has effectively positioned himself as a relatively more neutral figure no longer affiliated with the YPG, and, by extension, the PYD.

A Syrian Kurdish source with close knowledge of the reconciliation process observed in emailed comments to Al-Monitor that today’s gesture sets the SDF and the Syrian Kurdish political groups apart from the rest of the Syrian opposition, “which has been committing violations nonstop and covering up with no apology or no remorse.”

The Kurdistan National Council and Yekiti had not formally commented on the apology at the time of publication of this article. For all the upbeat commentary the talks remain fragile and so far nothing final has been agreed upon. But in a June 18 statement the Kurdistan National Council lauded the talks and the joint declaration made two days earlier heralding “an understanding” that they would move forward on the basis of a 2014 agreement struck in the Iraqi Kurdish city of Duhok that envisaged sharing power but was never implemented.

Now the parties recognize the urgency of overcoming their squabbles to forge a common Kurdish front as Syria’s nine-year-long conflict draws to an end. Kobane has long argued that unity between them will boost the Kurds’ hand both in now-stalled UN-facilitated talks in Geneva and in any future negotiations with Damascus. Just as critically, reconciliation makes it harder for regional powers, Turkey and Iran, who view Kurdish empowerment outside their borders as a magnet for their own restive Kurds, to sabotage the Syrian Kurds’ efforts at consolidating autonomy.