Buckling to popular and US pressure, the main Syrian Kurdish opposition umbrella group known as the Kurdish National Council has agreed to reopen its offices in northeastern Syria. 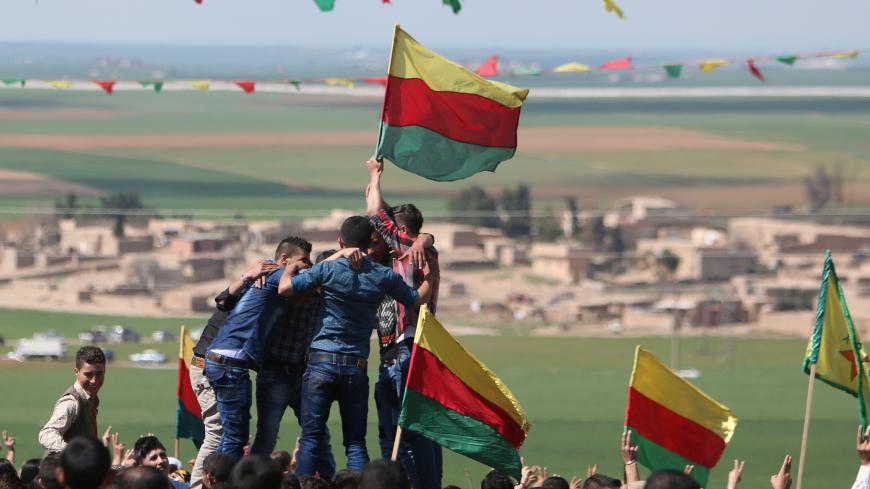 Kurdish people carry flags as they celebrate the spring festival of Nowruz in the Syrian town of al-Darbasiyah on the Syrian-Turkish border, March 21, 2017. - REUTERS/Rodi Said

Buckling to popular and US pressure, the main Syrian Kurdish opposition umbrella group known as the Kurdish National Council (KNC) has agreed to reopen its offices in northeastern Syria. The move is intended to pave the way for Kurdish unity in future negotiations with the Syrian regime.

The group has historically been at odds with the left-leaning Democratic Union Party (PYD) that leads the US-protected autonomous administration in northeastern Syria. The KNC has long charged that it was barred from operating freely in the Kurdish-majority region with many of its officials either jailed or disappeared.

Mazlum Kobane, the top commander of the Syrian Democratic Forces (SDF), hailed Sunday’s decision as “an important confidence-building step.” The charismatic commander has been at the forefront of the reconciliation drive. He told Al-Monitor recently that all the Syrian Kurdish parties need to be represented in talks with the regime.

Why it matters:  A thaw is important for several reasons, among them blunting popular resentment over the Syria Kurdish parties’ continued squabbles at a time when the northeast has been attacked and invaded by Turkey.

Any expansion of the Syrian Kurdish opposition blending the KNC with the PYD would help the former shed its image of being a Turkish pawn. Similarly, it would help the PYD dilute its own image as the local franchise of the outlawed Kurdistan Workers Party (PKK). Ankara has used the PYD’s links to the PKK to pressure foreign governments to shun political ties with it.

Syrian Kurdish unity potentially allows the United States to create an opening for the PYD in UN-facilitated constitutional committee talks in Geneva. KNC officials have attended the latter as part of the Turkish-backed Syrian opposition. The PYD has been left out so far because of Turkey.

The Kurdistan Democratic Party (KDP) wing of the Kurdistan Regional Government in Iraqi Kurdistan played a key role in bringing the sides to the table. Additionally, Kobane sees detente with the KNC as a means of building friendship with the KDP, whose continued cooperation is critical to the landlocked autonomous administration’s security and economic well-being.

What’s next:  KNC officials say no date has been set as yet for reopening their offices.

Meanwhile, Turkey’s divide-and-weaken strategy militates against reconciliation between the rival Syrian Kurdish groups. It remains unclear if and how Turkey will retaliate. For now, Ankara is too distracted by the unfolding tragedy in Idlib and its new military adventures in Libya. Both have strained its recently flourishing ties with Russia. Rising tensions between Ankara and Moscow may have lubricated Russia’s own efforts to court the Syrian Kurds and push for their unity.

Meanwhile, KNC sources caution that while they don’t doubt Kobane’s sincerity, the PYD's has yet to be tested.

Another potential pitfall is a difference in approach. The KNC advocates for ethnic rights for the Kurds in the Kurdish-dominated areas. The PYD is pushing radical communalism — with power notionally flowing from the bottom up — for all ethnic and religious groups living in the broader northeast, including Arab-majority parts currently under SDF control.

Know more:  For more background on the dynamics of Syrian Kurdish unity talks, read Amberin Zaman’s analysis and her exclusive interview with Kobane.