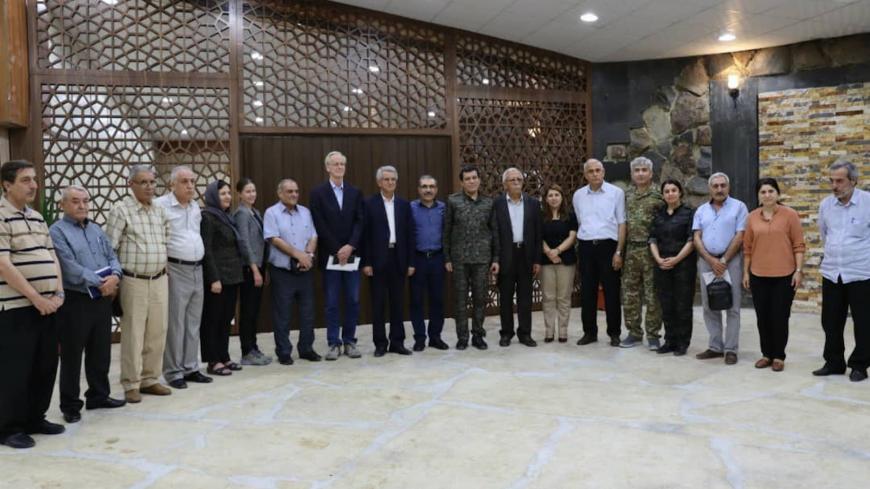 Members of the KNC and KUP, the biggest two Kurdish political blocs in northeast Syria, announce they have reached an agreement in Hasakah, Syria, June 17, 2020. - TWITTER/Mo_Herdem

Rival Kurdish groups in northeastern Syria said they had reached an initial agreement for what has long been an elusive goal — Kurdish unity — today, calling it “a significant historical step.” The announcement by opposition parties operating under the umbrella of the Kurdistan National Council (KNC) and those allied with the ruling Democratic Unity Party (PYD) follows US-mediated talks that began in April at a US military base outside the Kurdish-controlled city of Hasakah.

The sides said in a joint statement that they had “concluded the first round of the negotiations for Kurdish unity” and reached “a common political vision, agreeing on consideration for the 2014 Duhok Agreement on governance and partnership in administration and defense” as a basis to sustain the ongoing dialogue between the sides.

But they failed to elaborate.

Hours later, the US embassy in Syria followed up with its own statement in English, Arabic and, unusually, the main Kurdish dialect Kurmanji. "This understanding symbolizes an important first step towards greater political coordination between Syrian Kurdish political factions with the support of the United States and will contribute to a peaceful resolution of the Syrian conflict under UN resolution 2254 by helping all those Syrians opposed to the Assad regime," it said.

On Thursday, the KNC emphasized in a statement that there was no agreement as such but rather an "understanding" between the sides, a further sign of how sensitive and fragile the talks remain.

The Duhok agreement — brokered by Massoud Barzani, the KNC’s mentor and president of the Kurdistan Democratic Party (KDP) in northern Iraq — envisaged equal representation in the government for the rival groups and merging their military forces. The deal fell through over internal bickering and outside meddling, chiefly from Turkey, which sees Kurdish unity as an existential threat.

Parts of the KNC bloc are based in Istanbul and are affiliated with the Turkish-backed Syrian opposition. The PYD has since steadily consolidated power while its military arm, the People’s Protection Units (YPG), took the lead role in the US-backed Syrian Democratic Forces (SDF) in the fight against the Islamic State.

It was SDF commander Mazlum Kobane who initiated the latest stab at unity after Turkey’s October 2019 military incursion, which saw US forces pull back from the Turkish border and Russian and regime forces replace them. The threat of further Turkish military intervention has receded and President Donald Trump decided to keep around 500 American forces in northeast Syria “only for the oil." But the Syrian Kurds' eight-year experiment with autonomy remains precarious.

Should the sides actually forge a common front, it would in theory allow the PYD to be represented at now frozen UN-sponsored talks in Geneva to hammer out a modified constitution for Syria that would be implemented in the wake of democratically held elections.

The PYD has not been allowed to participate — while the KNC has — because Turkey won’t let it. This is because the group was founded by members of the Kurdistan Workers Party (PKK), which has been fighting the Turkish army on and off since 1984. The group is designated as a terrorist organization by Turkey, the United States and the European Union.

Kobane persuaded the United States that its engagement was critical in getting the KNC, the KDP and in an ideal world Turkey on board. He called today’s draft agreement “a significant result” and “a basis for a national Kurdish agreement in Rojava Kurdistan.” Rojava means Western or Syrian Kurdistan in Kurdish. Thanks were also given to Nechirvan Barzani, the president of the Kurdistan Region of Iraq, who leaned on the KNC to cooperate. Speaking privately, sources from both camps described today’s agreement as a declaration of intent to pursue the talks and said issues of power-sharing had yet to be comprehensively addressed.

The matter has gained some urgency as a new set of crippling of sanctions against the regime of Syrian President Bashar al-Assad under the Caesar Act came into force today. Washington insists they will not hamper humanitarian operations but Syrian Kurdish officials have aired worry about the sanctions’ impact as the collapse of the Syrian pound further pummels people’s buying power. The sharp drop in the price of oil, the main source of income for the administration, coupled with the COVID-19 pandemic, has added to its woes. Détente with Turkey would help mitigate the effects if it results in Turkey opening its borders with the Kurdish region for trade.

Wladimir van Wilgenburg, the co-author of the recently published “The Kurds of Northern Syria,” points out that, unlike the 2014 accord, today’s draft document was announced in Syria, not Iraqi Kurdistan, and that this vastly enhances its legitimacy. Moreover, the United States is directly involved this time, as is a top military figure from the PYD camp, SDF chief Kobane, who has broad public support that cuts across ideological lines in Rojava. “It’s unlikely that the KNC would have accepted a new deal without an international guarantor,” van Wilgenburg told Al-Monitor.

But even as Kobane and the top US diplomat in northeast Syria, William Roebuck, made upbeat comments, Turkish ground forces backed by fighter jets were pounding PKK targets during a third day of their “Claw-Eagle” offensive against the PKK in Iraq’s Kurdistan region. The move follows Kobane’s visit to Baghdad in early June to discuss security cooperation against the Islamic State.

Less than a week later, Turkey’s intelligence chief Hakan Fidan traveled to Baghdad as well. Iraq has formally protested the latest Turkish attack in a mild statement and by summoning the Turkish ambassador to Baghdad to the Foreign Ministry.

Sources familiar with the Kurdish unity talks said today’s announcement was made under “great pressure” from Roebuck, who was leaving Syria today. Some speculated that its timing was calculated to limit the fallout from the Turkish offensive.

A spokesperson for the women's foreign relations committee at the Martyr Rustem Cudi Makhmour camp, which was struck by Turkish jets along with 80 other targets in the early hours of Monday, accused Baghdad, the KDP and the US-led coalition of colluding with Turkey yesterday. The three “agreed to attack,” Leyla Arzo Eylhan told the Hawar news agency.

The PKK has broadly supported the talks as it comes under mounting military pressure from Turkey. Engagement with the United States albeit via the PYD is viewed as a useful card in its bumpy relations with the KDP and more importantly as key to the survival of Rojava, its primary bargaining chip, as it sees things, should peace talks with Ankara that collapsed in 2015 ever resume.

Some PKK hard-liners, however, call the talks a trap whose ultimate goal is to destroy the PKK.

The fact that Washington is pressing for PKK cadres to be purged from the administration so as to make it more palatable to the KNC and Turkey has reinforced their suspicions. Yet veteran PKK official Sabri Ok, who was seen as “the PKK commissar” in Rojava, is no longer in Qamishli, according to a senior Kurdistan Regional Government official who spoke to Al-Monitor on condition that he not be identified by name. The official did not say when Ok had left.

PKK officials have denied all along that Ok was ever there, other than “for visits.”

There are no signs, however, that Ankara’s position has changed. Turkey keeps pressing NATO — albeit unsuccessfully — to classify the YPG and the PYD as terrorist organizations. Ankara has also aired its displeasure over the unity talks via the state-run Anadolu news agency in a May dispatch, calling them an effort “to create an international representation space” for “the terrorist organization in northern Syria.”

Turkish leaders have not commented formally on the talks since then and Turkish officials reportedly did not raise any objections when Trump’s Syria envoy Jim Jeffrey broached the topic with Turkish officials during his last trip to Ankara in February.

But for Turkey, the benefits of the talks are measured by the extent to which they can weaken and divide the PKK — an unlikely outcome — and that is how Jeffrey may have sold them. But Turkey also desperately wants to undermine Kobane. The SDF commander’s meteoric rise on the diplomatic circuit, crowned by a phone call with Trump, is viewed with deepening alarm as it is seen as conferring legitimacy on the PKK. Turkey has placed a bounty on Kobane’s head.

But Ankara’s calculations could always change, especially if President Recep Tayyip Erdogan concludes that his foundering public support amid a weakening economy can only be reversed by engaging with the Kurds once again. But then so could Jeffrey’s, should he sense that the talks will dig Turkish-US relations into an even deeper hole.