Turkey is openly disgruntled over the US-backed effort to unite disparate Syrian Kurdish factions that kicked off last month. 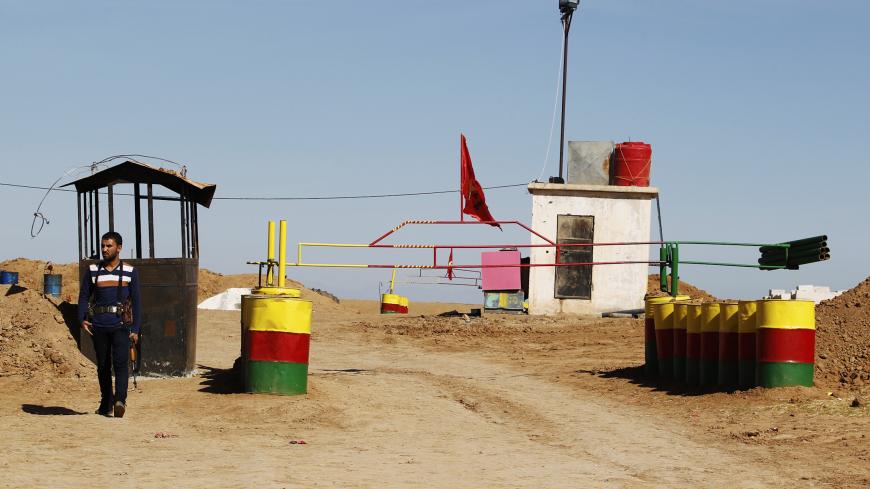 Turkey has begun to openly signal its displeasure with US-backed peace talks between Syrian Kurdish rival groups, raising the specter of failure for the latest US attempt to fulfill what have so far proven irreconcilable goals: to pursue its partnership with the Kurds and to repair ties with its NATO ally, Ankara, which have been badly frayed because of it.

Turkish disgruntlement was palpable in a May 11 dispatch in Turkey’s state-run Anadolu news agency. It characterized the effort to unite disparate Syrian Kurdish factions as more of a conspiracy aimed at creating “international representation space” for the “terrorist organization in northern Syria.”

The same day, the Turkish Foreign Ministry issued a statement blasting Greece, Egypt, Cyprus and the UAE over their ongoing standoff in the eastern Mediterranean Sea.

It also accused France, the aspiring mentor of “this axis of malice” of “intentions to establish a state of terror in Syria,” ostensibly over its involvement in the Syrian Kurdish peace talks.

Ominously and unusually, Turkey also fingered Nechirvan Barzani, the president of the Kurdistan Region of Iraq and a longtime ally of Turkish President Recep Tayyip Erdogan. Anadolu said Barzani had been “commissioned” by France and the United States to implement the plan.

The talks between the Kurdistan National Congress (KNC), an umbrella group of Syrian Kurdish opposition parties linked to the Istanbul-based Syrian opposition and the Democratic Union Party (PYD), which is part of the autonomous administration in northern Syria, kicked off last month.

The State Department’s envoy on the ground, William Roebuck, is mediating between the sides.

Past stabs at unifying the groups were spearheaded by Barzani’s uncle Massoud, who presides over the Kurdistan Democratic Party (KDP), the most powerful faction in Iraqi Kurdistan. They failed for a variety of reasons. Turkish resistance channeled through its leverage over the KDP and the KNC was one them.

Turkey views the consolidation of Kurdish gains in northern Syria as an existential threat that encourage its own more than 14 million Kurds to break away. “Kurdish rights are like the sea level rising. When they rise in one place, they rise everywhere,” said Giran Ozcan, the Washington representative of the Kurdish-friendly People’s Democratic Party, the third largest grouping in the Turkish parliament, in emailed comments to Al-Monitor.

Its therefore not surprising that the United States has been pressing the sides, albeit unsuccessfully, to refrain from commenting to the media about the talks, for fear they will be torpedoed yet again.

The latest round of dialogue was initiated in late October by Mazlum Kobane, the genial commander in chief of the Syrian Democratic Forces (SDF) who played a critical role in helping the US-led coalition collapse the Islamic State’s so-called caliphate in Syria.

Kobane has shifted his strategic acumen from the battlefield to diplomacy, hoping that by co-opting KNC factions and smaller Kurdish parties outside it, he can bolster the autonomous administration’s diplomatic legitimacy with more local buy-in as well. Kobane described the effort in a January interview with Al-Monitor as establishing a common Kurdish front to push for Kurdish rights, be it at now stalled UN-brokered peace talks in Geneva or in future negotiations with the central government in Damascus.

The timing is no coincidence. Kobane reached out to the KNC shortly after Turkey’s Oct. 9 invasion of a large swath of SDF-controlled territory between the towns of Tell Abyad and Ras al-Ain. The operation, rendered possible by President Donald Trump’s decision to withdraw US troops from the area following a telephone call with Erdogan, came as a huge shock.

Turkey justified the assault by echoing its long running mantra that the SDF are terrorists. The claim stems from the fact that Kobane and other top cadres in the autonomous administration were for decades members of the outlawed Kurdistan Workers Party (PKK), which is on the State Department’s list of terrorist organizations.

The PKK has been waging an armed campaign against the Turkish state since 1984, punctuated by failed peace talks and cease-fires. The latest round collapsed in 2015 and Ankara has since escalated pressure on the SDF and the United States to sever its ties with the group.

The United States has, in turn, been pressing Kobane to purge the SDF and all other security and civilian structures of the seasoned PKK cadres who came in to build them when the Syrian army withdrew from the area in 2012.

There is talk within the State Department’s Syria team led by Jim Jeffrey about replicating the “Manbij model” across northeast Syria. The term refers to the mixed Arab-Kurdish town of Manbij, the sole SDF-administered town lying west of the Euphrates River where dozens of alleged PKK-linked administrative and military cadres were removed in line with Turkish demands though Turkey continues to insist these were never fully met.

A deal with the KNC and other Syrian Kurdish parties would weaken Turkey’s argument that the autonomous administration is a “PKK terror state.” Optimally it would end Turkey’s objections to the US-SDF partnership, shielding the northeast from further Turkish attacks — and further US betrayals.

At the same time, it would ease Turkish pressure on the Barzanis to squeeze access via the Fish Khabur, the sole border crossing through which humanitarian aid currently flows to the northeast.

In a perfect world, Ankara would open its borders for trade as it did with the Iraqi Kurds, allowing the autonomous administration to become self-sustaining and grow into “another northern Iraq.”

The regions’ oil, which Trump cites as the reason for keeping US forces in the northeast, would help grease relations, as it already does with the Kurdistan Regional Government. Tensions between Washington and Ankara over the former’s alliance with the SDF would subside.

From the PKK’s vantage point, this scenario might compel Turkey to resume peace talks with their imprisoned leader Abdullah Ocalan and agree to a cease-fire, allowing the rebels a sorely needed respite from Turkey’s increasingly lethal drone attacks. “We want the talks to succeed more than anyone,” a veteran PKK operative based in Iraqi Kurdistan told Al-Monitor via WhatsApp.

Such calculations are likely to have propelled the United States to support the negotiations. A senior KNC official speaking not for attribution insisted to Al-Monitor, “The Americans are really serious, and Mazlum [Kobane] is very sincere.”

The KNC could not in any case afford to shun Kobane’s overtures. To do so would have bolstered the PYD’s charges that the KNC takes its cues from Ankara amid public fury over the Turkish invasion. What's more, the Barzanis, who help bankroll the KNC as Anadolu pointedly noted, appear to be on board.

But any deal may have been doomed from the get-go.

A well-informed source who requested anonymity in order to speak freely observed, “It’s good to have the Kurds getting along and not being divided by great powers.” The source cautioned, however, “There are parts of the US-Syria team that see some big Kurdish front as the key to mollifying Turkey and turning the northeast against Damascus and containing Iran.” But as the October assault showed, Washington continues to prioritize its relations with Ankara, often at the Kurds’ expense.

The source continued, “Turkey will never lift its veto over the SDF in Geneva. The United States should  insist on the SDF being in Geneva, particularly as it continues to cite Geneva as the only forum for discussions with Damascus. But it won’t do that, so if the goal is a vehicle for the SDF getting to Geneva — as opposed to Kurdish unity being a positive end in itself — then it's a road to nowhere.”

Omer Ocalan, the PKK leader’s nephew and an HDP lawmaker, was blunter. “Wherever Turkey sees the Kurds making political gains, it's determined to crush those gains.” He added in an telephone interview with Al-Monitor, “The Kurdish issue has spilled beyond Turkey's borders and can no longer be solved through Turkey’s internal political dynamics. As Kurds we have to think big now and strike international alliances based on our own values and principles, of course.”

Western observers speaking not for attribution contend that another, less altruistic reason the United States wants the Syrian and Iraqi Kurds to get on better is because it seeking to consolidate its troop presence in the Kurdish areas as an alternative to the rest of Iraq. Calls for US troops to leave have been growing since the assassination of Iran's Quds Force leader Qasem Soleimani.

“The Americans need the border [between Iraqi Kurdistan and northeast Syria] to be open and fluid. Their reliance on the Kurds has increased. The key thing is the process itself. It helps keep things calm,” said one of the observers in a telephone interview.

Some disagree. “Why do we need that tiny sliver of northeast Syria to stay in northern Iraq?” another asked.

In a further cynical maneuver, Turkey has invited the Association of Independent Syrian Kurds to join the Istanbul-based Syrian opposition. Founded by Ankara in 2016, the obscure grouping has little if any support on the ground, according to Wladimir van Wilgenburg, co-author of the recently published “The Kurds of Northern Syria.” Turkey’s goal, Wilgenburg said, is “to put more pressure on the KNC while they are in talks with the PYD.”

“Turkey wants to show they have alternatives to the KNC in case they reach a deal with the PYD,” and the fact that Turkey extended the invitation “betrays its concern that a deal may be in the works,” he added in emailed comments to Al-Monitor.

Wilgenburg believes that chances of a deal “are limited” and not just because of Turkey. The PYD would be reluctant, for example, to fold the KNC’s Roj Peshmerga force into the SDF “because it doesn’t want a competing armed Kurdish force” that could plant the seeds of intra-Kurdish conflict. Likewise, the Roj Peshmerga would be unwilling to place themselves under the SDF’s command.

The KNC official acknowledged that so far the talks have been more about “agreeing on basic principles” rather than moving forward on substance. He added that the KNC would not share a table with the PYD in Geneva until a comprehensive agreement that includes political, administrative and military issues is reached.

An added complication has arisen in Iraqi Kurdistan. Tensions between the PKK and the KDP have flared in Zine Werte, a strategic mountain pass in Iraqi Kurdistan that leads to the Qandil Mountains, where the PKK is based.

The KDP sent in more than 400 of its Peshmerga fighters to Zine Werte last month, saying it was to monitor traffic to prevent the spread of COVID-19 by people traveling to and from Iran. The PKK says the real reason is to help clear path for a Turkish offensive on Qandil and has called on the KDP to withdraw.

When it sent a trio of fighters to relay that message, Turkey killed them in an airstrike.

The standoff plays into Ankara’s hands, as it places Kobane in the awkward position of bolstering ties with Barzani while the latter's fighters confront fellow Kurds.

By the same token, though, military pressure on Qandil gives Kobane more space to tell PKK hard-liners that diplomacy, not war, is the way forward. The abiding challenge for all sides is to convince Ankara, too.