Damascus, Ankara and Moscow turn up the heat on US-backed group; UN Syria envoy says, "We can’t continue like this." 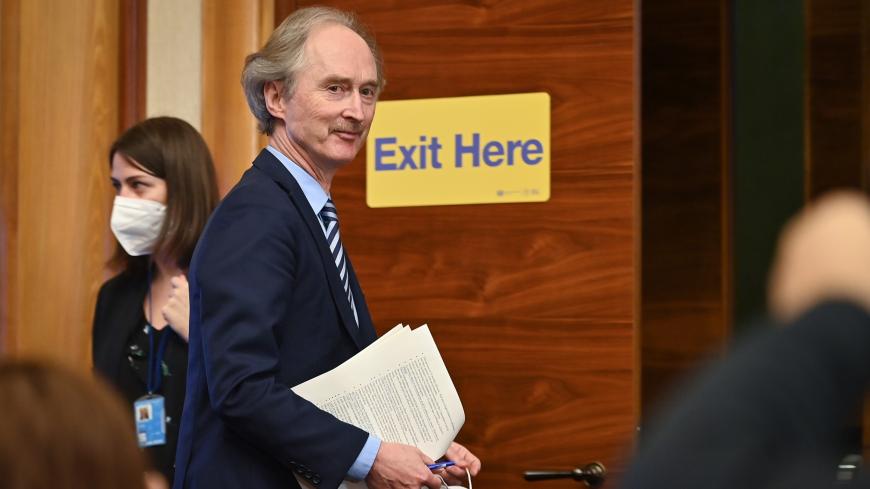 UN Special Envoy for Syria Geir Pedersen leaves a press conference following the conclusion of a drafting commission session of the Syrian Constitutional Committee on Jan. 29, 2021, at UN Offices in Geneva. - FABRICE COFFRINI/AFP via Getty Images

For the Kurds, the decision for limited military coordination with Syrian President Bashar al-Assad’s forces in October 2019 was a desperate hedge after Turkey, including Turkish-backed Syrian armed groups, launched Operation Peace Spring and seized over 1,800 square miles of mostly Kurdish-administered towns.

The SDF is made up primarily of the Kurdish People’s Protection Units (YPG), the gendarmerie of the Democratic Union Party (PYD), which is the leading political party in Kurdish-administered regions in Syria. Turkey considers the PYD/YPG a terrorist group linked to the Turkish Kurdistan Workers Party (PKK), and therefore on a par with the Islamic State and al-Qaeda. Both Turkey and the United States consider the PKK a terrorist group, but the United States does not share Turkey’s view on the PYD/YPG/SDF. The SDF has been the US on-the-ground partner in the military campaign against the Islamic State in Syria.

Assad now senses an advantage to press the Kurds for further concessions, with both an assist from Moscow and the concurrence of Ankara.

"The latest showdown [between Syrian Kurdish and regime forces] seems to have further weakened the standing of the Kurds," writes Fehim Tastekin. "Arab tribes were already irked by Kurdish control of the oilfields and frequent unrest over the SDF’s 'anti-terror' operations. The blockades in Hasakah and Qamishli have given fresh ammunition to those who seek to discredit or criminalize the Kurds. Stories of sick people unable to reach blockaded hospitals, students missing exams and drivers desperate for fuel made headlines, tarnishing the image of the Kurds. Tellingly, the local governor and Syrian military officials attended the funeral of the slain protester in Hasakah, while some tribal leaders and politicians vocally criticized the SDF."

No surprise that Russia brokered the deal this week for both Damascus and the SDF to de-escalate the conflict. Russian President Vladimir Putin prefers that the SDF be pressured militarily and isolated politically, and will increase or lower the heat as needed.

As we wrote back in January 2020, his endgame has always been to try to broker an understanding between Ankara and Damascus for the Kurdish region to come under Syrian government control. Recall the January 2020 meeting in Moscow between Turkish Intelligence chief Hakan Fidan and his Syrian counterpart, Ali Mamlouk. According to the Syrian daily Al-Watan, Turkish intelligence and military officials held talks in Damascus in December, but this hasn’t been verified.

If Putin were ever to get traction on a Syrian-Turkish channel — still a reach given the bad blood between Assad and Turkish President Recep Tayyip Erdogan — he would benefit from a weakened Kurdish hand and a less-engaged United States, as well as further estrangement in US-Turkish relations over Syria.

Kurds remain "topic of disagreement" between US, Turkey

The Biden administration, however, has not signaled that the United States will be stepping back in Syria.

The remaining 500 or so US troops there remain a source of leverage, as do the many sanctions imposed during the Trump administration.

The SDF also has much good will and respect among US political and military leaders as a result of its successful partnership with the United States in the campaign against the Islamic State.

The United States and Turkey therefore remain divided in their Syria policies because of differences over the SDF.

A White House readout of the Feb. 2 call between US national security adviser Jake Sullivan and Turkish presidential spokesperson Ibrahim Kalin made no mention of Syria.

Kalin’s readout, however, recounted his telling Sullivan that it was "necessary to carry out an effective and joint fight against all kinds of terrorist organizations" in Libya and Syria, adding that "joint efforts are necessary to resolve through a new perspective the topics of disagreement between the two countries such as S-400s, F-35s and the PYD-YPG."

The Kurds can only stave off the pressure from Assad, Turkey and Russia with support from Washington, which continues to back intra-Kurdish reconciliation talks initiated by SDF leader Mazlum Kobane in October 2019 with the Kurdish National Council.

The council is a coalition of non-PYD Kurdish parties, backed by the Kurdistan Democratic Party of Iraq, and therefore more palatable to Ankara. That, in any case, is the US strategy in the talks.

‘‘Dialogue with the opposition parties was also meant to ease relations with the Iraqi Kurds, who are the principal mentors of the Kurdish National Council, and to eventually melt Turkish hostility, which is one of the main reasons Washington signed on," explains Amberin Zaman. "Turkey continues to block the PYD’s participation in UN-facilitated talks in Geneva between the Syrian opposition and regime representatives to model a new constitution on the same grounds that Turkish forces keep attacking Syrian Kurdish forces in the northeast: that they are all linked to Kurdistan Workers Party (PKK) rebels fighting the Turkish state. The fact is that they are, and this is one of the reasons that the talks have hit a wall."

Russian Foreign Minister Sergey Lavrov, after meeting with his Iranian counterpart, Mohammad Javad Zarif, reaffirmed the relevance of the Astana format — that is, the coordination of positions among Russia, Iran and Turkey on Syria — and advised that the Jan. 25-29 meeting of the Syrian Constitutional Committee’s Drafting Commission (the so-called "small group") in Geneva be "held strictly in accordance with their negotiated agenda."

The committee has 150 members, equally divided among representatives of the Syrian government, opposition and civil society (the small group has 45 members, drawn from the 150). According to UN Security Council Resolution 2254, passed in 2015, a new constitution is required prior to new elections. The timetable for the new constitution and elections outlined in the resolution, which guides the UN-mediated political process, is not even worth mentioning, it is so far behind schedule.

At the end of the Geneva meetings Jan. 29, UN Special Envoy for Syria Geir Pedersen declared his disappointment to the commission members and the press, saying, "We can’t continue like this."

Of course, Assad, the Syrian government-aligned participants and the Astana trio are all fine with the commission sessions to "continue like this" — that is, indefinitely and with little or no progress — and this was almost certainly their intent going in.

Pedersen, however, is drawing a line, and probably could use an assist from Washington to get the process back on track. To his credit, he never inflated expectations about the Constitutional Committee, telling Al-Monitor back in September 2019 that he saw it only as a "door opener for a broader political process."

For Turkey, which unlike Iran and Russia does not back Assad, the Constitutional Committee is barely a sideshow. Turkey's influence with the Syrian opposition parties has frozen the PYD out of the committee, another means of isolating the Syrian Kurds politically, and opening it up to pressure from the Astana trio.