A lethal clash between Syrian forces and a US patrol occurred after Syrian troops allegedly refused to allow a US patrol to cross a checkpoint. 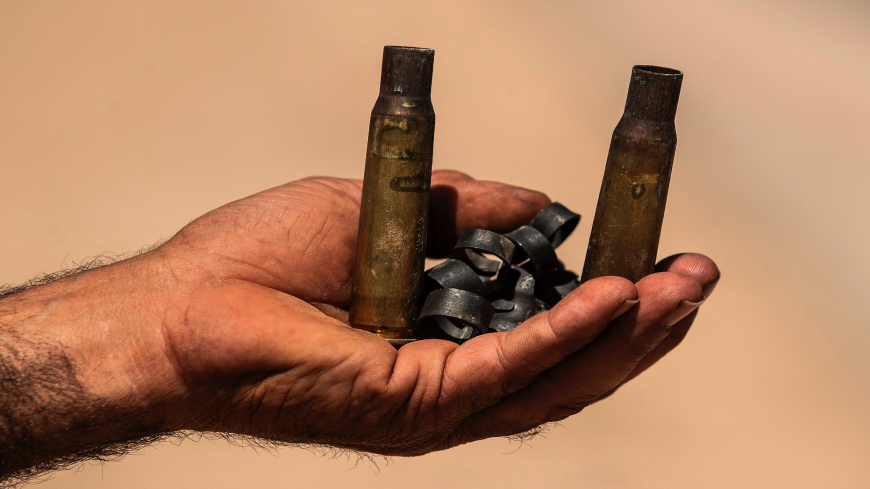 A man holds used bullet cartridges in the area of a pro-Syrian government checkpoint near the village Tal Dahab in the countryside of Qamishli in Syria's Kurdish-controlled northeastern Hasakeh province, on Aug. 17, 2020. The US-led coalition in Syria said a patrol had come under attack and engaged in a firefight near the pro-government checkpoint in the country's northeast. - Photo by DELIL SOULEIMAN/AFP via Getty Images)

The US-led coalition confirmed a firefight had taken place but denied SANA’s claim that a US helicopter had fired on the Syrian government checkpoint.

The two sides issued conflicting accounts of the incident. SANA claimed the pro-regime checkpoint denied the coalition troops passage, leading the US patrol to open fire.

The coalition said its patrol was allowed through the checkpoint before it came under fire.

“After receiving safe passage from the pro-regime forces, the patrol came under small arms fire from individuals in the vicinity of the checkpoint,” the coalition said in a statement.

“Coalition troops returned fire in self-defense. The coalition did not conduct an airstrike,” the statement read. “The coalition patrol returned to base. The incident remains under investigation.”

Coalition spokesman Col. Myles Caggins told reporters via WhatsApp that no coalition helicopters fired their weapons in the incident and that he could not confirm the regime’s specific casualty numbers.

“It seems likely there were pro-regime forces shot during the skirmish they initiated,” Caggins said.

A video purporting to show the firefight surfaced on social media on Monday. In it, US armored vehicles are visible alongside a road as automatic weapons fire kicks up dust at buildings off to the right side.

Visible in the brief footage is at least one Apache helicopter, though it does not appear to be involved in the fight.

Russian and Syrian pro-regime forces in northeast Syria have increased pressure on US-led coalition patrols in the area since the coalition downsized its presence in the country in response to President Donald Trump’s order to withdraw last October.

A Syrian man was killed in February when US soldiers shot back after coming under fire near a pro-regime checkpoint near Qamishli. US troops in Syria are not authorized to initiate fighting with the Syrian regime or with Russian or Iranian forces except in self-defense.

Though coalition officials coordinate with their Russian counterparts on patrolling areas daily, the rival sides have had a number of tense encounters along local roads over the past several months.

A US-led coalition patrol came face-to-face with a Russian convoy in June near Derik. The standoff, the second in just a few days in the area, reportedly blocked traffic for hours as US and Russian helicopters observed from overhead.

Russian forces in Syria “are always testing us,” US Envoy to the coalition James Jeffery said in January of the tensions.

The US Defense Intelligence Agency (DIA) also recently reported that the coalition’s local partner militias, the Syrian Democratic Forces (SDF), have been “indirectly enabling” Russian efforts to push the boundaries of deconfliction agreements.

The DIA said in May that a Russian patrol inside coalition territory had been escorted by members of the SDF, according to a US inspector general report released earlier this month.

Threatened by Turkey and the Syrian regime, the predominantly Kurdish-led SDF has flirted with Moscow as the Trump administration has proven a temperamental guardian in the past.

SDF commander Mazlum Abdi said in July he met with head of Russian forces in Syria Alexander Chayko just days before he sat down with CENTCOM commander Gen. Kenneth “Frank” McKenzie, commander of all US forces in the Middle East.

So far, it appears Mazlum is hedging his bets with Washington. The State Department’s Syria team has been quietly laying the groundwork for a newly established US oil company to develop infrastructure in Kurdish-controlled areas in the hope of financially stabilizing the autonomous region and lulling Turkey into an agreement that will preserve the SDF.

Russia, which backs the Syrian regime in its near decadelong civil war and has sought control of the country’s oil fields in exchange, has long opposed the US military’s presence and tested coalition commanders’ resolve.

Former Defense Secretary James Mattis said he personally ordered groups of pro-regime fighters backed by Russian Wagner Group paramilitary contractors “to be annihilated” when they attacked a US- and SDF-held gas field in Deir ez-Zor in 2018.

Syrian President Bashar al-Assad has vowed to retake all of Syria by military force and has repeatedly rejected the SDF’s demands for political semi-autonomy.

The regime sent a few thousand war-weary soldiers into northeast Syria beginning last autumn to fill the gap left by the consolidating US-led presence. The Syrian government forces have since sought to recruit from the local population, the US Defense Intelligence Agency has said.