US soldier faces criminal charges over firefight with Syrian regime

Sgt. 1st Class Robert Nicoson is accused of recklessly endangering his own men by allegedly bringing them into close contact with Syrian pro-regime forces. 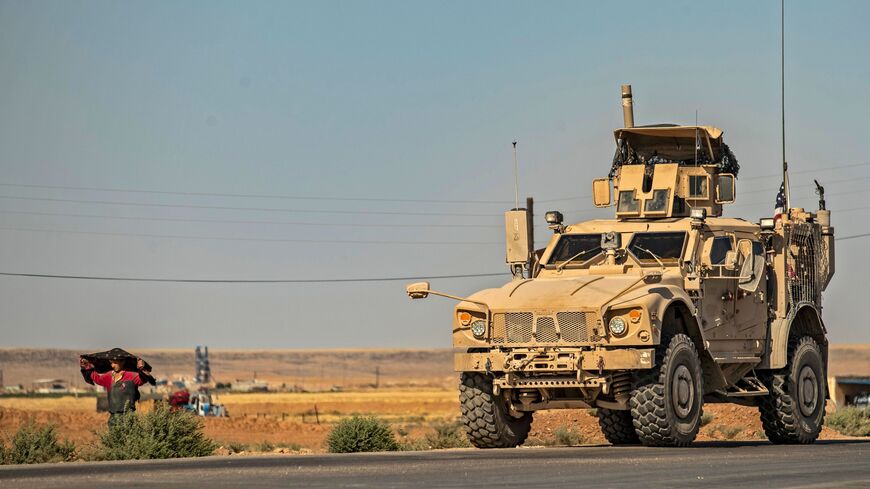 US forces patrol the area of the town of Tal Tamr, in Syria's northeastern Hasakah province, on Aug. 17, 2020. The US-led coalition in Syria said a patrol had come under attack and engaged in a firefight near a pro-government checkpoint in the country's northeast. - DELIL SOULEIMAN/AFP via Getty Images

A US Army soldier previously under consideration for military honors for his actions during a lethal skirmish with a Syrian pro-regime militia last year is now facing criminal charges over the incident.

The US military's allegations against Sgt. 1st Class Robert Nicoson of the 82nd Airborne Division include two counts of failure to obey a lawful order, two counts of reckless endangerment, one count of communicating threats and three counts of obstructing justice. The case was first reported by Army Times.

Nicoson was the lead noncommissioned officer in a convoy of some 16 soldiers passing through a checkpoint controlled by the pro-regime National Defense Forces militia near Tal al-Zahab in August.

The convoy passed through the checkpoint with permission from the Syrian militia members before coming “under small arms fire from individuals in the vicinity of the checkpoint,” a spokesperson for Operation Inherent Resolve said in a statement shortly following the incident last year.

“Coalition troops returned fire in self-defense,” the statement read. At least one Syrian man was killed during the exchange of fire, video of which surfaced on social media. A US Apache helicopter also dropped flares over the scene. Al-Monitor reported on the incident at the time.

Prior to the Army’s investigation, Nicoson’s actions during the firefight led to his consideration for a Bronze Star with Valor, a decoration for distinguished performance in combat.

He and another soldier are said to have exposed themselves to incoming fire to provide cover for a convoy gunner as he reloaded, according to the United American Patriots, a veterans’ advocacy group that has publicly backed service members charged with war crimes.

Nicoson is not being charged for his actions during the firefight, nor for any war crimes, but rather for his alleged decisions and actions leading up to the incident. The allegations stem from an investigation of the incident by the Army’s Criminal Investigation Command.

A former member of Nicoson’s unit, who declined to be named for this story, described the charges against him as “insane.”

Nicoson’s attorney, Phillip Stackhouse, told Army Times that the soldiers were ordered to stay at least 2 kilometers away from Syrian pro-regime forces. The noncommissioned officer is also accused of instructing teammates to delete video of the incident. Nicoson’s platoon commander was also in the convoy, but only received formal reprimand. Stackhouse did not return a request for comment by publication time.

Nicoson faces an upcoming hearing that may recommend the case go to court-martial, which would require the approval of the commander of the 82nd Airborne, Maj. Gen. Christopher Donahue. If convicted under court-martial, Nicoson could face dishonorable discharge and potential prison time.

Less than 1,000 US forces remain in corners of northeast and southeast Syria as a residual force as part of Operation Inherent Resolve, the US-led multinational fight against the Islamic State. Syria’s decadelong civil war has stalled and some areas of the country resemble a checkerboard of sorts of various local militias, foreign soldiers and mercenaries.

American troops in Syria are not authorized to fire upon other forces other than the Islamic State unless acting in self-defense. Last year saw a series of tense run-ins between US and Russian forces in northeast Syria.

Russia’s troops, who back the government of Syrian President Bashar al-Assad, moved into Kurdish-controlled northeast Syria in 2019 after the US shrank its position there as a result of an order from then-US President Donald Trump to withdraw American forces from Syria. That order was eventually reversed after the United States pulled back from contested areas such as Kobani and Manbij.

Russian forces swept in to fill the gap and began harassing US convoys in northeast Syria. Russia has long called for the United States to leave Syria and has lucrative oil deals with the Assad regime that remain unfulfilled in large part because US soldiers and the Kurdish-led Syrian Democratic Forces occupy the country’s main oilfields.

The firefight in which Nicoson was involved followed a previous skirmish between US forces and pro-regime fighters in February near Qamishli. In 2018, hundreds of Russian mercenaries, Syrian pro-regime and Iran-linked militia were reportedly killed in an attack whose goal was a natural gas field held by US and SDF forces in Deir ez-Zor province.

Then-Defense Secretary Jim Mattis told reporters at the time that he did not know why pro-regime forces would attack that site. Mattis later told Congress he personally gave the order to destroy the attacking force. A Washington Post report following that incident linked it to a lucrative gas deal between the Syrian regime and a crony of Russian President Vladimir Putin.

Trump administration officials formulated a policy under which the United States would not leave Syria until Assad’s regime agrees to hold free and fair elections in line with United Nations Security Council Resolution 2254. US officials also said having troops in the country physically obstructs Iran's easy access to Syria.

The former US president, apparently dissatisfied with the plan, repeatedly tried to pull US troops out of the frozen conflict.