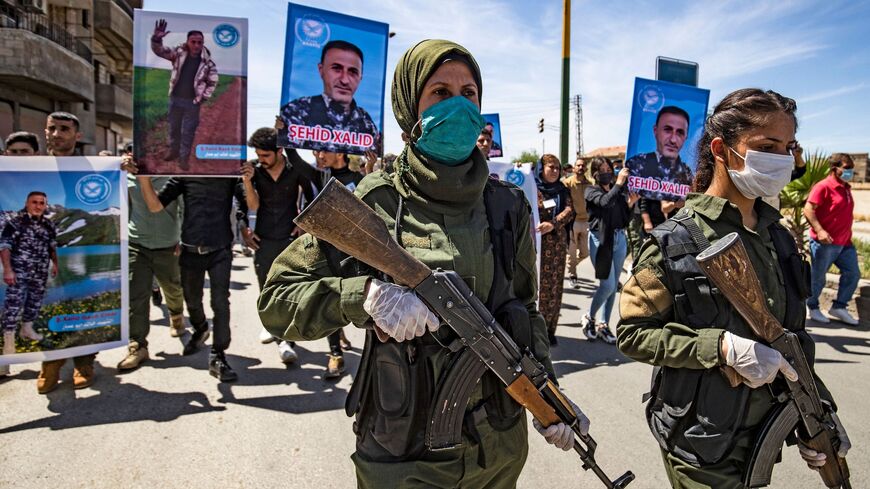 Female members of the Syrian Kurdish internal security services known as Asayish march in a procession ahead of the body of their fallen comrade Khalid Hajji, who was killed following clashes with pro-regime forces, during his funeral in Syria's northeastern city of Qamishli on April 22, 2021. - DELIL SOULEIMAN/AFP via Getty Images

Fighting escalated between Syria’s Kurdish-led forces and members of a pro-regime militia in the northeastern city of Qamishli on Friday after a local community leader was shot dead returning home from a meeting about reducing tensions in the city.

Shaykh Hayes al-Jaryan, also known as Abu Lawrence, was killed late Thursday night near his home near Qamishli airport, an area controlled by the pro-regime National Defense Force militia, according to local officials.

One local source described al-Jaryan as an independent mediator who had “a good relationship” with the Syrian Democratic Forces. His son Lawrence was killed in the war against the Islamic State in 2014.

No group has claimed credit for al-Jaryan's death, which has renewed urban fighting that broke out earlier this week between Kurdish-led security forces and the NDF around the Tayy neighborhood, in which families from the Arab tribe of the same name are prominent.

The fighting broke out on Tuesday night after an Asayish officer was killed in a shootout with NDF fighters at a checkpoint near the city’s center. The cause of the incident remains unclear, as does the number of additional casualties.

At least two children have been killed in the crossfire so far, according to the Rudaw news agency. The Syria-based Rojava Information Center reported Friday that two people have died and six have been injured in the skirmishes so far.

Local community leaders in Qamishli are seeking renewed dialogue to end the fighting, according to a local official who spoke to Al-Monitor on the condition of anonymity.

Syria’s Kurdish-led forces control roughly a third of the country, having captured it during the fight against the Islamic State thanks to support from the US-led international military coalition.

Some areas of Qamishli, including the airport, have remained in control of pro-Assad militias under an agreement between the two sides. The city lies in Syria’s far northeast, near the country's borders with Iraq and Turkey.

Speaking at the Pentagon on Thursday, the head of all US military forces in the Middle East, Gen. Kenneth “Frank” McKenzie, offered US support to help defuse the fighting.

“We’ll do anything we can to help in de-escalating these clashes,” McKenzie said.

“You prefer to deal with it at the diplomatic level, if you can, or through talking, but we’ll be prepared to assist our SDF partners,” he said.

The US offer comes after an attempt by Russia’s military, which backs President Bashar al-Assad in the country’s decade-long civil war, failed to produce an effective cease-fire on Wednesday.

Sounds of gunfire ripped through the city on Friday for the fourth day in a row, shattering the calm to which residents have become accustomed in recent years under SDF control.

Units of the SDF’s Asayish and anti-terror HAT forces attempted to push into the Tayy neighborhood on Thursday, according to local reports, but their progress has been disputed by the NDF. The pro-government militia draws many of its fighters from the Al-Tayy tribe.

Russia has exploited fighting between the Kurdish-led forces and other groups in northeast Syria to expand its footprint and edge out the US military, whose presence in Deir Ezzor province blocks the Kremlin’s access to lucrative oil deals with the Assad regime.

Though US forces continue to train the Kurdish-led forces to root out the remnants of IS, they are not authorized to engage pro-regime or other parties in the conflict unless acting in self-defense.

Russian mercenaries and pro-regime fighters attempted to seize a US- and SDF-held natural gas field in Deir Ezzor in 2018, only to be met with a blitz of American artillery and airstrikes that reportedly killed as many as 200 fighters.

CENTCOM reported last year that the Assad regime and Russia have worked to exploit ethnic and tribal tensions in areas controlled by the SDF in order to undermine the US foothold in Syria.

US officials have insisted the military will remain in Syria until the Assad regime agrees to hold free and fair elections. The previous administration also demanded that Iran’s fighters, which also support Assad, leave the country.